When the MLB was first founded in 1876, the state of Colorado wasn't even a thing yet. Much has changed in the near 150 years of Major League Baseball that has been played in the states, including some of the oldest MLB stadiums that America's Pastime has taken place in.

The Polo Grounds and its absurd dimensions have come and gone. Centerfielders have tripped over their shoelaces on Houston's Tal's Hill, which was scrapped. Even old Tiger Stadium's flag pole in center or the bizarre right field seating lasted decades in Detroit. Candlestick Park was retired in favor of Oracle Park, which has seen more National League pennants won by the San Francisco Giants than its predecessor.

Some teams changed stadiums, but kept the names the same. Yankee Stadium still exists, but it's not the same house Ruth built into an American League hub. Busch Stadium, where the St. Louis Cardinals play, also had a similar relocation of its branding to a new ballpark in 2006. We should also mention the Texas Rangers move from Globe Life Park to Globe Life Field.

A relic of the pre-Internet age, the multi-purpose stadium as gone the way of the Dodo, as the Pittsburgh Pirates built PNC Park, the Twins began playing at Target Field, the Reds erected Great American Ballpark and the Phillies moved out of Veterans Stadium. Even the Nationals moved out of RFK to their new Nationals Park.

Some stadiums, however, have remained nearly unchanged. Boston's iconic Fenway Park and Chicago's ivy-clad Wrigley Park are the crown jewels when it comes to places to get a hot dog, munch on some cracker jacks, enjoy nine innings while also soaking in the stadium's nostalgia.

Those two baseball palaces are by far the oldest still used today by MLB. The rest of the list may surprise even the smartest of baseball fans. 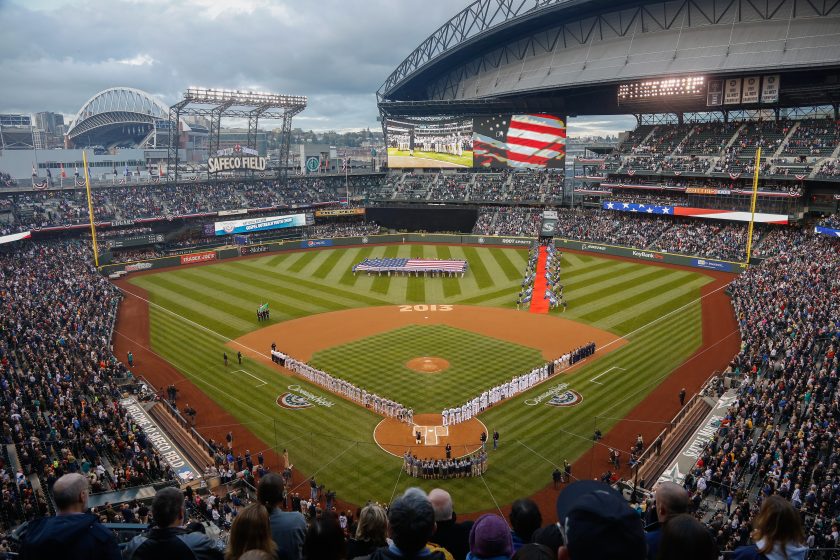 T-Mobile Park has seen so much since its first game in 1999. The record-tying 116th win in 2001, Ichiro Suzuki breaking the single-season hits record in 2004 and Félix Hernández's perfect game against the Rays in 2012 are just a few of the most memorable moments.

Most people know this stadium as Safeco Field, but after a 20-year agreement came to an end, T-Mobile acquired the rights to the name. 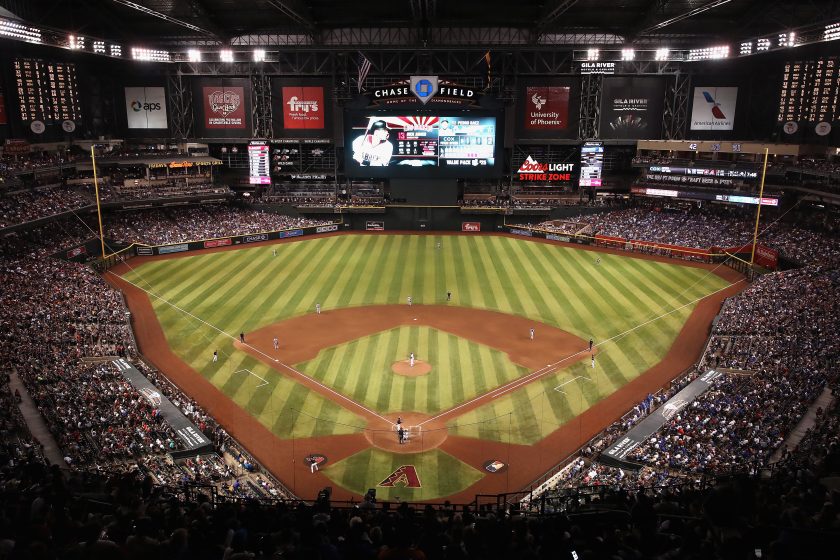 Chase Field has become known for many things over the two-plus decades since its inception. The fan-filled pool in right field and the air-conditioned aspect help keep Arizonans cool in the summer. 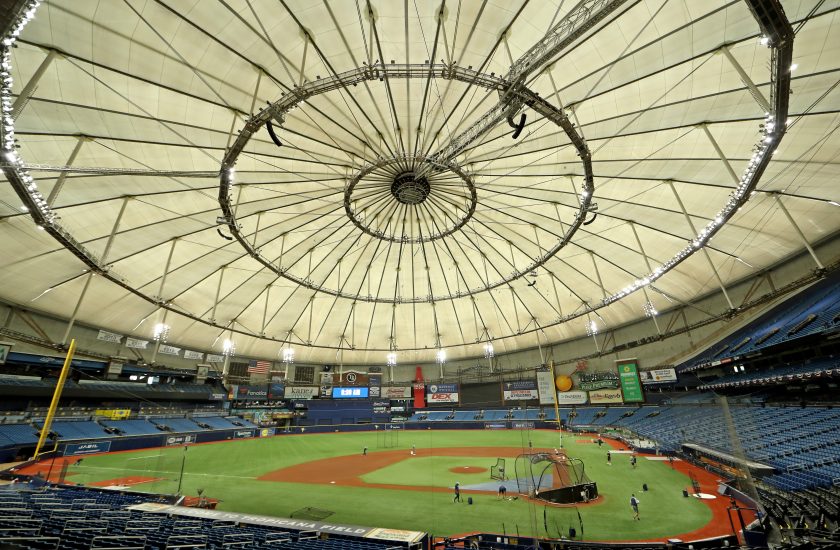 The Trop is considered the laughing stock of not just the state of Florida, but of all Major League Baseball stadiums. It was actually built in 1990 and served as the home stadium to the Arena Football League's Tampa Bay Storm in 1991 and the NHL's Tampa Bay Lightning for three seasons in the 1990s, back when it was known as the ThunderDome (which is an objectively terrific name).

It became the Devil Rays' home and opened its door to MLB fans in 1998. The stadium is also a pretty versatile one, as it's hosted 14 other sports and competitive events over the years. Still, the fact that fans have to cross bridges to where it sits in St. Petersburg has been a common gripe for Tampa fans who've asked for a new stadium. 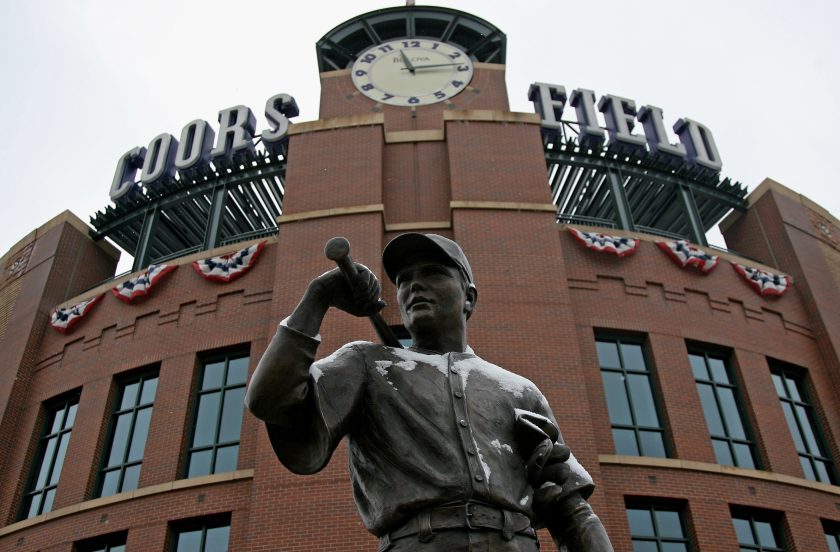 The Rockies and Marlins were both expansion teams in 1993, and the Rockies played at first in Mile High Stadium while Coors Field was constructed. The very first game, a 14-inning slugfest between Colorado and the New York Mets, ended in a walk-off home run from Dante Bichette, setting the tone for this offensive-minded, thin-air park. Since then, Coors has hosted two All-Star Games (1998, 2021) and hosted two of the four games in the 2007 World Series, which the Boston Red Sox swept. One cool note about Coors Field is that while it was being constructed, bones were found that are believed to be from a triceratops, which is how Denver got its dinosaur mascot, Dinger. 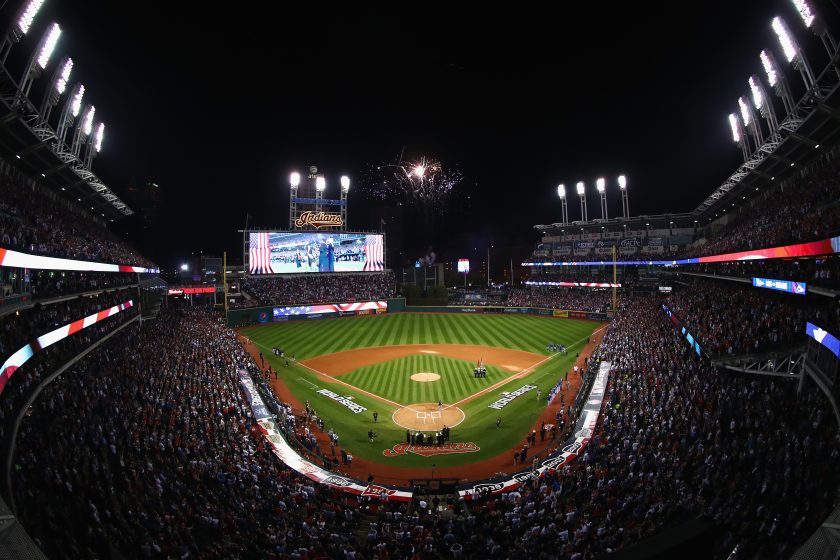 It was Jacobs Field from 1994 until 2008, when Progressive Insurance shelled out nearly $58 million to name it after the company for the next 16 years. The park has undergone a few renovations in the years since, but its most famous game may have come in 2016. The Chicago Cubs broke their 108-year title drought when they defeated the then-Indians in an epic extra-inning World Series Game 7. 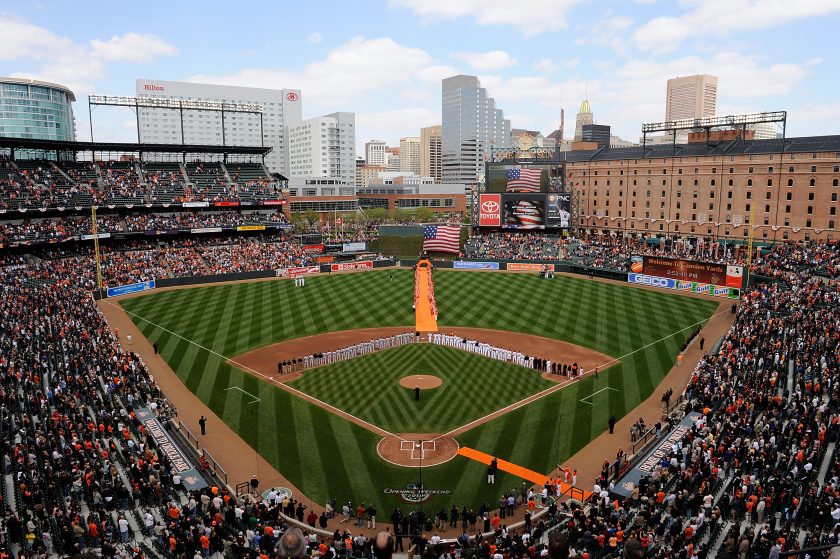 Prior to Oriole Park, the Orioles played their games in Memorial Stadium, a stadium originally built for football and minor league baseball. It's safe to say this park was quite the upgrade.

Situated just two blocks from Babe Ruth's birthplace, this stadium captures the essence of America's Pastime. Beyond the right field seats is the iconic brick B&O Warehouse that stands eight stories high and more than 1,000 feet long. Only one player has ever been confirmed to have hit the warehouse: Ken Griffey Jr., who reportedly hit a 465-foot dinger off the building in the 1993 Home Run Derby. 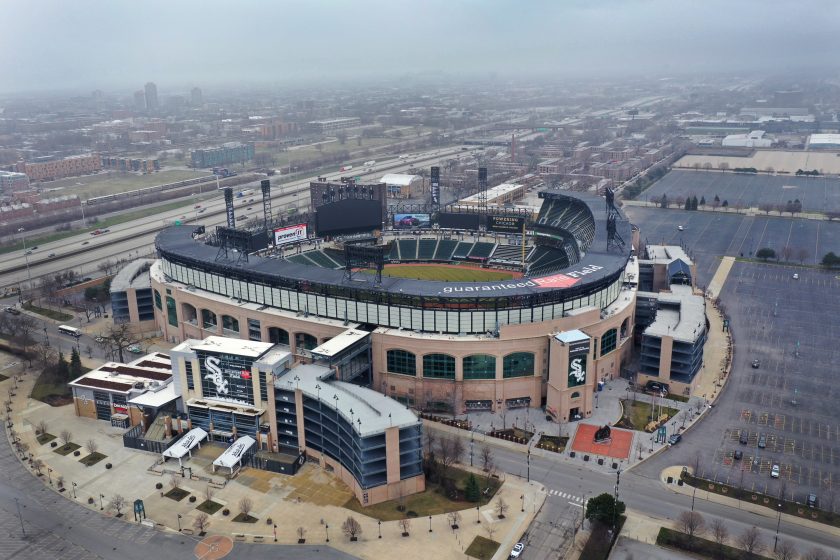 The White Sox are a historic franchise who first played their games at Comiskey Park, named after owner Charles Comiskey, who built it for his Chicago White Stockings in 1910. By 1990, it was the oldest MLB stadium still in use. The new Comiskey Park was built across the street in 1991 and in 2003 was renamed U.S. Cellular Field. It was changed again in 2016 to Guaranteed Rate Field. To me, it will always be the house that Frank Thomas and Paul Konerko built. 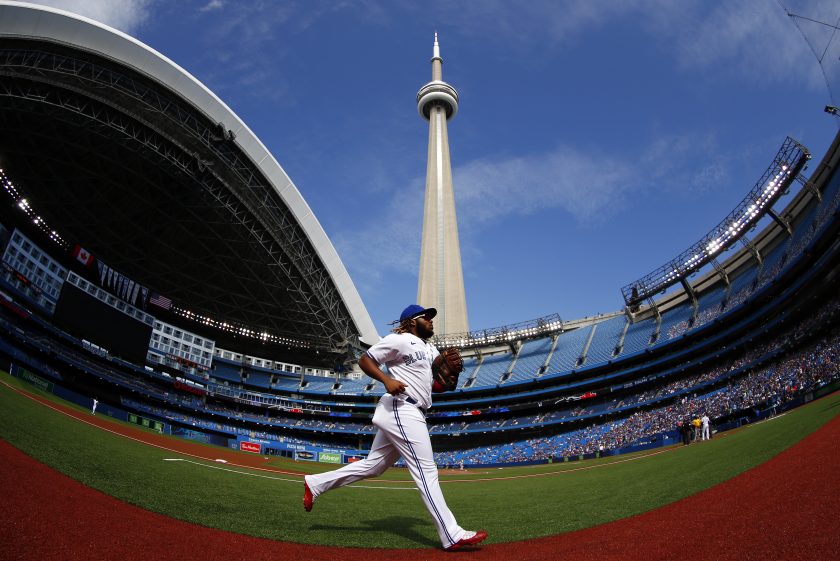 Originally named the SkyDome, this Toronto stadium was actually the first North American stadium to ever feature a retractable roof. It also at one point had the world's largest scoreboard at four stories tall and 115 feet wide. By far the coolest part of the stadium is that you can stay in a hotel room that has a view of the entire field. That's because the Toronto Marriott City Centre Hotel is actually situated inside the Rogers Centre. 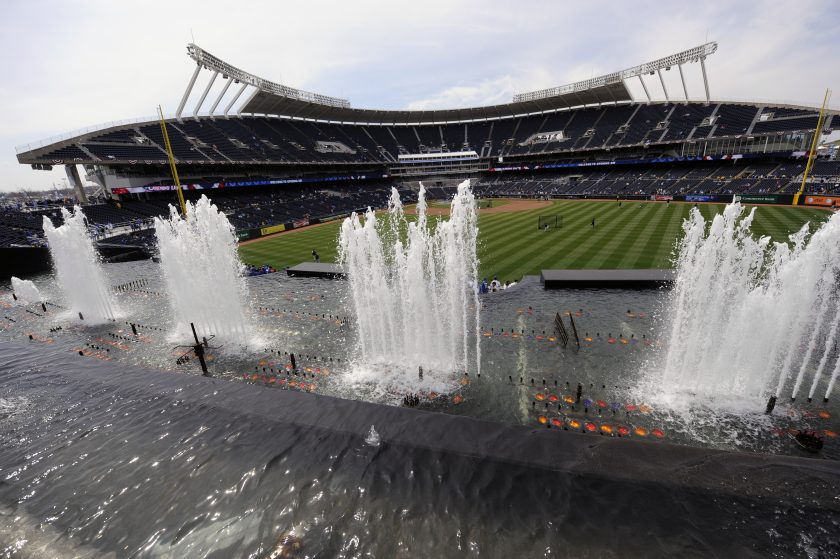 Ah, finally we've reached the '70s. Royals Stadium opened in 1973 and welcomed a team featuring a young George Brett, John Mayberry and Lou Piniella. Throughout the years since, the stadium has hosted two All-Star Games, three no-hitters and four World Series. It was renamed after owner Ewing M. Kauffman in 1993 and has remained that. What makes this park unique is the 322-foot wide waterfall display beyond the outfield wall. It was built in the '90s and continues to be a main attraction in Kansas City. 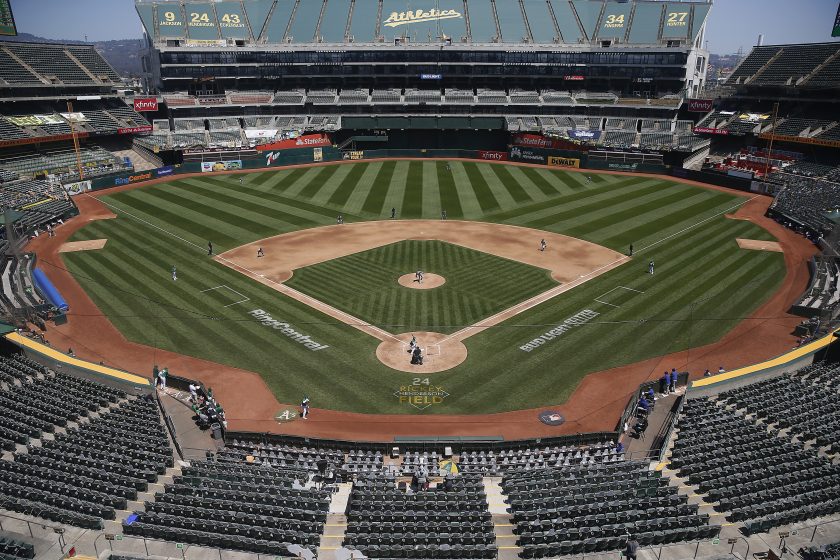 Man, when are the A's gonna get that new stadium? The Coliseum was originally built in 1966 as a multipurpose stadium that primarily hosted the NFL's Oakland Raiders, which explains the enormous foul territory.

In 1968, owner Charles Finley moved the Athletics from Kansas City to Oakland, and the Oakland Athletics were born. The A's have remained here and saw some of the more incredible teams in MLB history, including those led by Reggie Jackson, Bert Campaneris, Catfish Hunter, Vida Blue and Rollie Fingers, which won three straight World Series from 1972-74.

This park has had more bizarre names than a Kanye West-Kim Kardashian baby name brainstorm, including the McAfee Coliseum (2004-08), Overstock.com Coliseum (2011), O.co Coliseum (2011-16) and now RingCentral Coliseum (really rolls off the tongue, huh?). It will forever just be known as "The Coliseum." 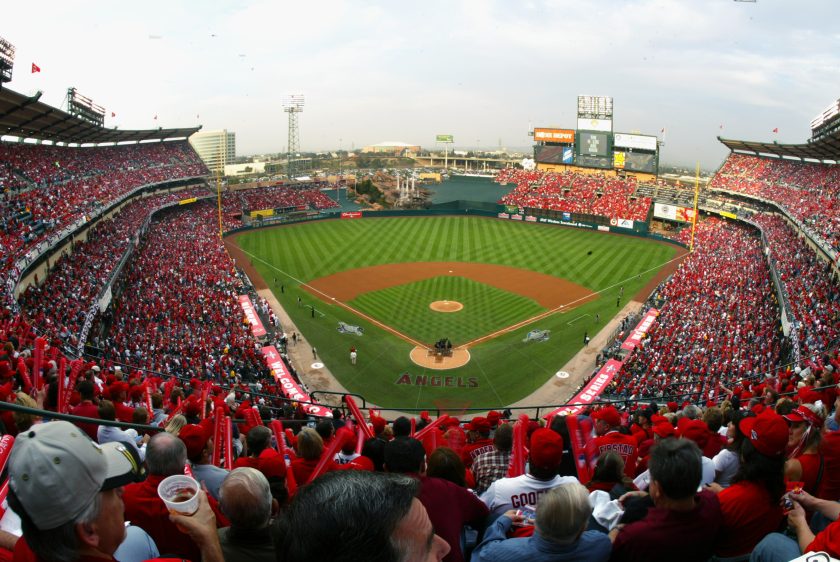 So many stars have played between the lines here. Nolan Ryan. Mike Trout. Shohei Ohtani.

The stadium opened the doors to the California Angels in 1966. By the late 1970s, Anaheim Stadium was undergoing renovations to add more seating because the Los Angeles Rams were playing there as well. By 1981, the stadium could hold more than 65,000 fans, up an insane amount from its originally 43,204 capacity. The Rams moved to St. Louis in 1995, and the stadium was reverted back to a baseball-only facility. These days, fans are accustomed to watching Trout do otherworldly things and two-way star Ohtani, well, do much of the same. 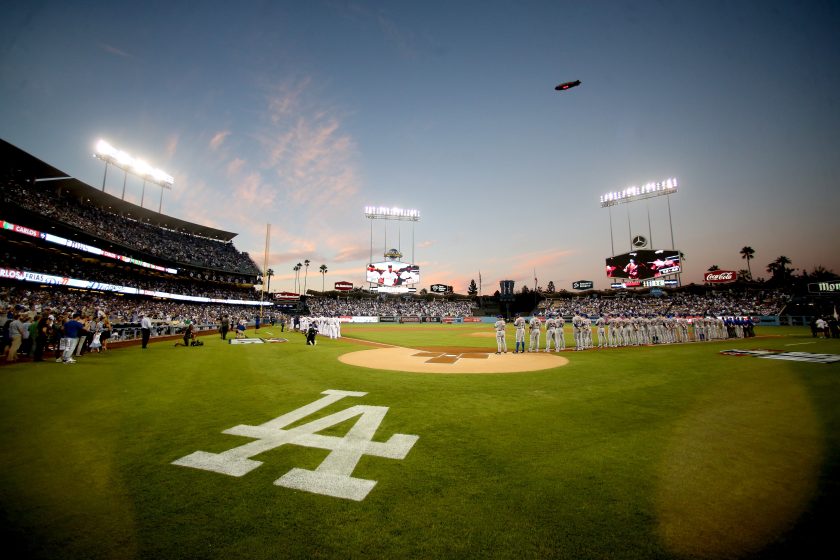 Going back to their Brooklyn days, the Dodgers are a historic franchise. Jackie Robinson broke the color barrier in 1947, but it wasn't until the team moved to Los Angeles in 1958 and played its first game in Dodger Stadium in 1962. It was christened when the Dodgers won the 1963 World Series against the New York Yankees.

Known as Chavez Ravine or "Blue Heaven on Earth," as Tommy Lasorda called it, Dodger Stadium is known as one of the most beautiful stadiums in the league. It's where Kirk Gibson hit that 1988 World Series walk-off home run, Sandy Koufax threw his perfect game and Rick Monday saved the American flag. It doesn't have quite the same history that the next two stadiums do, however. 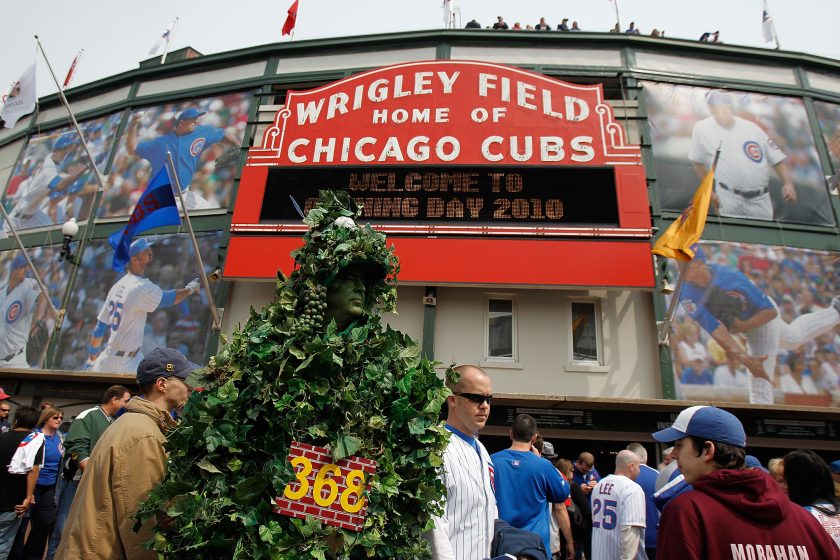 Wrigley Field is, and always will be, one of the most iconic stadiums in baseball. There are so many incredible features that make it one-of-a-kind, from the ivy-clad walls that were planted by Bill Veeck in 1937 to the massive manually-operated scoreboard that was built the same year along with the outfield bleachers. Heck, this stadium is so old that lights weren't even built until 1988. Before that, the Cubs only played day games at home.

"The Friendly Confines" was originally Weeghman Park and cost just $250,000 to build. The Wrigley family bought it in 1920 and renamed it Cubs Park. In 1926, it was named Wrigley Field in honor of owner William Wrigley Jr.

From the ivy to the hand-turned scoreboard and the Waveland Avenue rooftops beyond left field, Wrigley will always have that 1900s feel to it. 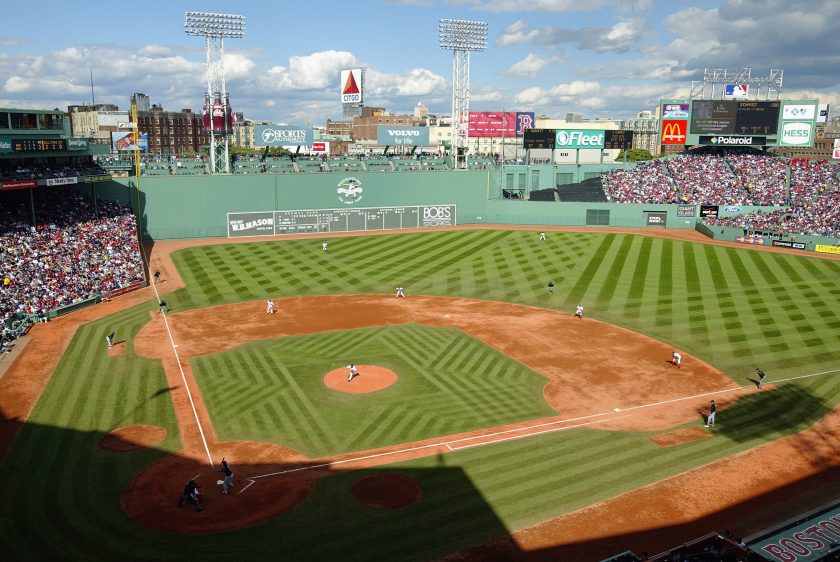 Fenway and Wrigley are proof that the oldest ballparks are also the best. It's named after the nearby Bay Back Fens in Boston, which is a parkland and urban wild. The Red Sox played the first official baseball game here against the New York Highlanders, a name the Yankees ditched in 1913. Boston then won 105 games that year and the World Series.

The original Green Monster wall in left field looked nothing like it does now. It was built in 1912 to keep non-paying fans from seeing games. Originally made of wood, the Green Monster was destroyed by fire in 1933 and rebuilt using a concrete base that featured the manual scoreboard. In 1947, it was painted green and took on that iconic nickname.

With so many features (the Green Monster, Pesky's Pole, the centerfield triangle) and traditions (anyone like singing "Sweet Caroline"?), Fenway has been MLB's premier ballpark since it opened. I'll take a swing here and say it isn't going anywhere anytime soon.