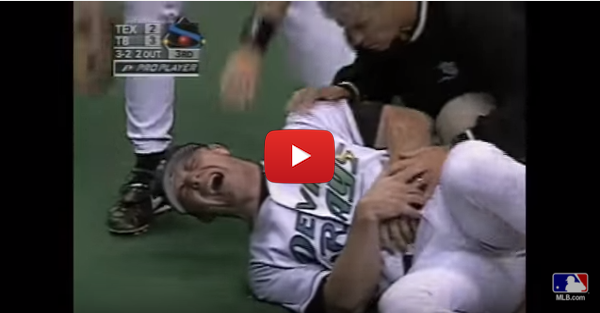 Baseball isn’t exactly a sport where you think of gruesome on-field injuries. That is, unless you’ve heard of Tony Saunders.

Back in 1999, Saunders, a pitcher for the Tampa Bay Devil Rays, broke his arm while throwing a pitch against the Texas Rangers. His reaction was immediate and the pain obvious, as his follow through carried him straight to the ground where he writhed in agony.

Unfortunately for Saunders, that was just the start of his troubles. After rehabbing his broken arm, Saunders went on to break the same arm in the same fashion, a year after his initial break.

“As far as returning to baseball and becoming a major-league pitcher again the prognosis is poor,” said Koco Eaton, the Devil Rays orthopaedic physician at the time. “As far as gaining full use of his arm, being a good father and husband, the prognosis is great.”

Rick Vaughn, the Devil Rays VP of Public Relations, had a front-row seat to both injuries.

“He had that same look on his face,” said Vaughn, who witnessed both events. “To see it once was pretty horrifying. To see it twice is unimaginable.”

Saunders went on to retire at just 26 years old as a result of his injuries.

READ MORE: Baseball?s Best Fight Ever was Nolan Ryan Beating the Snot Out of Robin Ventura