and MLI have often been asked what my favorite baseball movie is, and it's never my answer that draws ire.

You don't like "Field of Dreams"? No, I'm very much #TeamBlevins on that front.

You don't like "Rookie of the Year"? It's not my favorite, but I enjoy it.

The answer is "The Sandlot," for those who are curious, with "42" being a CLOSE second. But my point isn't about Ham Porter or Chadwick Boseman. It's about "A League of Their Own."

"A League of Their Own" is a good movie, bordering on great. Who doesn't love a female-driven sports movie that stars Geena Davis, Tom Hanks, Rosie O'Donnell and Madonna? Right?

The problem with "A League of Their Own" has nothing to do with the film in its entirety, but more about one particular shot. Here's Evette Dionne, the Editor-In-Chief of Bitch Media, setting the scene:

"There are two moments from the film that are really memorable for me. When the ball gets away from Dottie during a game, a black woman dressed in her Sunday's best and sitting in the 'colored' section of the field retrieves and throws it forcefully back to Ellen Sue. Though there are no black women or women of color in the All-American Girls Professional Baseball League, it's clear that this woman, whose name we never learn, has the talent and the skill to be on any team in the league. Unfortunately, segregation kept black women and women of color from participating in the AAGPBL, though some real-life black women played in the Negro Leagues. The scene didn't move me when I initially watched the movie, but now, it sticks with me because her exclusion is so emblematic of the ways in which black women and women of color were treated historically."

Dionne's revelation that this shot is emblematic of the ways Black women and women of color were treated historically is undeniable. But what also happens in that scene is worse. Ellen Sue gets the ball back, and this unnamed woman nods her head as if to say "that's right, we can play, too."

And then nothing happens. The movie continues.

What does this shot do? Does it illuminate that Black women were excluded from the All-American Girls Professional Baseball League? Yes. Does it emphasize their ability to play the game? Sure does. Does it make viewers feel good about the fact that within a few years Jackie Robinson broke Major League Baseball's color barrier that the White Baseball establishment created in the first place? I would argue that, yes, it does. And that's a problem, especially considering that a Black woman was playing the game professionally at the same time as Robinson.

Most baseball fans can name the teams from "A League of Their Own" and the majority of the players, but how many of you can name the first female professional baseball player? You know of Marla Hooch, but you don't know Toni Stone. 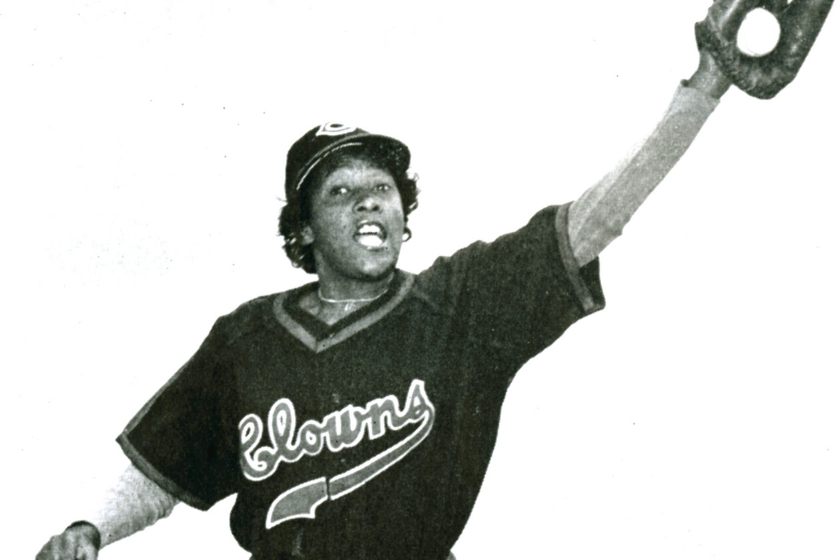 There's much debate about Stone's younger years growing up in Minnesota. One fact that is commonly brought up is how strong Toni's desire to play baseball was. At one point, her parents asked a priest to talk her out of playing ball with the boys. The Lord obviously had other plans.

Despite the conflicting reports on the origins of her love for the game of baseball, both converge with the Twin Cities Colored Giants, a semi-pro team in St. Paul. Jimmy Lee, of the Minneapolis Spokesman, writing about the Colored Giants on July 30, 1937, said, "The team has the distinction of having a girl pitcher on its roster. No other team in the Northwest can boast the same. Miss Marcenia Lyle Stone, 16-year-old girl athlete, has been doing much to amuse the fans with her great catcher [sic] and wonder hitting power."

While beginning to get noticed in St. Paul, Stone set her sights on Gabby Street, the manager of the St. Paul Spirits, a team in the American Association. Street, who was running a baseball school in St. Paul was once a catcher in the big leagues, and even managed the St. Louis Cardinals in the early 1930s. After refusing to take no for an answer, Street agreed to let her work out at his school. Later in life, Stone would quote Street as saying, "I haven't had anything to do with the color line that keeps your people out of baseball. And I haven't got anything with that other unwritten law that keeps women out of the game."

Stone's life also gets fuzzy from 1937 to 1946, but we know she found herself in San Francisco looking for an American Legion team to play for, but instead, she joined the San Francisco Sea Lions, another semi-pro team. That's where she'd meet Captain Aurelious Pescia Alberga, a native of Oakland and a WWI veteran, who would become her husband in 1950. From there she'd join the New Orleans Creoles, one of the best semi-pro teams in the country. And three years after joining the Creoles, Stone would sign a deal with the Indianapolis Clowns in 1953, making baseball history.

Toni Stone was officially the first woman to play organized professional baseball. And she'd be taking over the roster spot left by Atlanta Braves legend and MLB Home Run King Hank Aaron, who left the Clowns for the then-Milwaukee Braves. 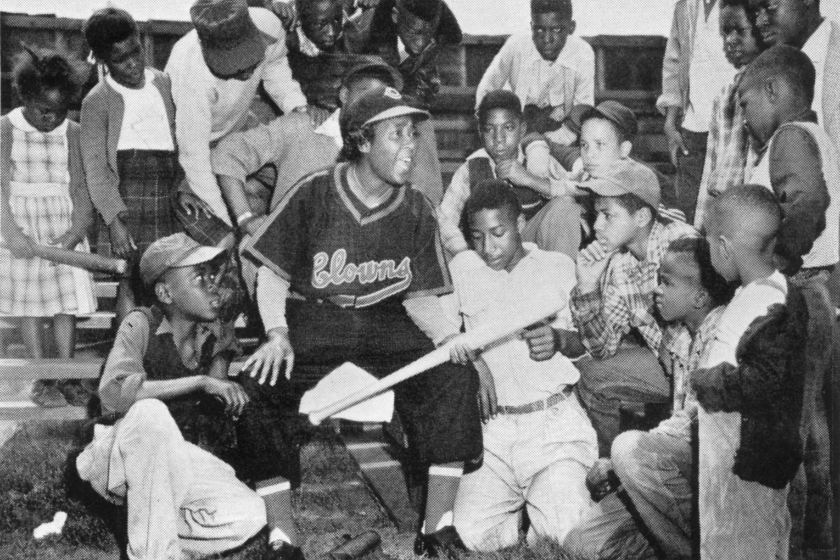 Originally viewed as a sideshow publicity stunt, the Clowns initially tried to ramp up Stone's gender. They asked her to play in a skirt, which Stone refused. They took pictures of her in a dress getting off the Clowns team bus and printed them beside Toni going full out, getting dirt on her uniform.

In a 1953 feature, Ebony wrote of Toni's signing that "the second baseman of the triple-pennant winning Indianapolis Clowns of the Negro American League wears a size 16 dress. That is, when she is not playing baseball. On the playing field, she wears an oversize 42 shirt (to accommodate her 36 bust) and thinks, talks, and plays like a man."

The feature continues, "While most sports fans were sure that the Clowns signed Toni merely as an extra box-office attraction (the team features baseball comedy and 'Spike-Jones like' music on its barnstorming tours), the young lady has surprised everybody by turning in a businesslike job at both second base and at the plate. In her first game against a semipro team in Elizabeth, N.C., she walked and then drove in two runs with a sharp single."

Was Toni Stone comparable to Josh Gibson at the plate? No, but no one was expecting her to be, much like how no one expected Jackie Robinson to play like Rube Foster. Toni was there to draw crowds back to Clowns games after the Negro Leagues' drop in popularity following the emergence of Robinson. But, Toni wasn't a sideshow act. She could play with the boys and then some. In fact, one of Toni's claims to fame is that she was able to snag a hit off the legendary Satchel Paige of the Kansas City Monarchs.

The Indianapolis Clowns were a part of the Negro American League, which meant two things. The Clowns played Negro League Baseball against some of the best Black players that were being kept out of the majors. Those games meant something. They were hard-fought battles. They were the reason the Clowns players became ballplayers. But in order to pay the bills and keep the team alive, the Clowns also had to play white teams, which led to some racially tense climates. But it's worse than that.

In those games, the Clowns were expected to perform, not as baseball players, but as African American stereotypes. How can stripping away the joy from something that runs in your veins be easy to take? One night you're going wire-to-wire with some of the best to step in the box. The next, you're being embarrassed and humiliated. All the while being reminded of a system that is doing its damnedest to keep you down and out. That was the reality for the Indianapolis Clowns and Toni Stone.

Even today, very little is made of Stone or Mamie Johnson's contributions to the game at the Baseball Hall of Fame in Cooperstown, although they both have been inducted into the International Women's Sports Hall of Hame, and Toni had an Off-Broadway play written about her. The city of St. Paul also celebrates Toni Stone Day each March 6th, as a tribute to the legacy their hometown trailblazer left behind. Perhaps as more people become aware of their struggle, sacrifices and ability to compete at the professional level, future generations will see more women of color represented in Upstate New York's shrine to America's Pastime.

Imagine A League Of Their Own sequel that starts with the scene of the black woman throwing the ball back from the stands and you stay with her and it becomes a biopic on the 3 black women that played in the Negro Leagues (Toni Stone, Mami "Peanut" Johnson & Connie Morgan). pic.twitter.com/iFkKMo17en

So while the "A League of Their Own" feels like a women's empowerment movie, in reality, it missed the point. It's showing that even at its best and most nostalgic, Black ballplayers, no matter their sex, were kept out of the batter's box when it mattered. Even worse, they were constantly being told to wait their turn, without the promise of an at-bat.

The new Amazon series, spearheaded by Will Graham and Abbi Jacobson, will attempt to give voice to the stories the original film missed. "This series is going to tell the story of inclusion," Graham told The Hollywood Reporter. "But it's also going to tell the story of exclusion and what happens when that magic door doesn't open for you -- how do you have to find another way to do the thing that you love."

Abbi Jacobson came to the idea for the reboot after writing an episode of "Broad City" and someone mentioned adding Mamie Johnson into a montage of powerful, revolutionary women. "I didn't know who she was," added Jacobson. She was one of the first and only Black women to play in the male Negro leagues professionally. When Will and I started talking about the ways in which we wanted to do our version, that felt more real, nuanced and gritty and [a way to] incorporate more women's stories."

Graham then added, in regards to the scene mentioned above, that they wanted to open a door to stories that had been shut out before.

"You look at story of Mamie Johnson and Toni Stone or the other players who found their own paths to playing professionally when the door to the league didn't open for them, and they're incredible stories. It took so much will and determination. The chance to be able to tell this story, not just about the league but about this whole generation of women and their experience in the sport, we feel so lucky to be part of the team doing it," he said.

Jacobson acknowledges the connection the reboot has to the original movie, but also signaled change.

"The pilot, more than the rest of the series, nods to the film in a bunch of different ways. But we are really leaning into the fact that Black women weren't allowed to even try out. Our version is very much about the inclusion of women in professional baseball, but it's also about the inclusion of white women and white-passing women in professional baseball. There are really heavy scenes that we're also exploring in a major way."