Who is Kamaru Usman? If you aren't already aware of his UCF skills, you will be soon enough.

Kamaru Usman is known as "The Nigerian Nightmare" in the octagon. It's a fitting nickname for the Auchi, Nigeria, native who terrorizes his opponents.

While Usman's skills keep his opponents up at night, he's working. It's been the theme of his mixed martial arts career. He started off as a wrestler, starting as a sophomore at Bowie High School in Arlington, Texas, and later winning a Division II national championship at the University of Nebraska-Kearney. He turned his focus towards MMA after injuries plagued his chances to make the United States wrestling team for the 2012 Olympics in London.

By 2015, Usman won The Ultimate Fighter 21 and earned a six-figure contract with the UFC. He's been a powerhouse in the welterweight division ever since.

The Nigerian-American fighter won the UFC Welterweight Championship for the first time by unanimous decision over Tyron Woodley at UFC 235. Four fighters have challenged him for the belt since and each has failed. Colby Covington couldn't do it at UFC 245, Jorge Masvidal couldn't do it at UFC 251 or UFC 261 and Gilbert Burns couldn't do it at UFC 258. In the future, after dominating his current weight class, Usman is looking to move towards more light-heavyweight fights following UFC 278.

The Ultimate Fighter 21 tournament winner's incredible run has made him the best pound-for-pound fighter in the entire promotion ahead of Alexander Volkanovski, Israel Adesanya, Jon Jones and Francis Ngannou.

He attributes his success to his wife and young daughter.

RELATED: Dustin Poirier's Wife is a Mother & His Biggest Fan

Kamarudeen Usman and Eleslie Dietzsch have been together for a long time. Their daughter, Samirah Usman, was born in 2014. However, the couple likes to keep their personal life under wraps, and Usman didn't admit they were dating publicly until 2016.

Sometime between then and now, the two tied the knot. Not much is known about Dietzsch other than she's of Brazilian descent and her parents' names are Eunice and Jose, according to PlayersGF. The two like to keep the details of their relationship under wraps, but the Brazilian native can be found cheering on her significant other at his fights.

Samairah Usman is clearly the star of her parents' lives. She makes frequent appearances on their respective social media accounts and even has an Instagram account of her own. The mixed martial artist appears to love being a dad and bonds with his daughter by allowing her to workout with him. And with her half-Brazilian, half-Nigerian heritage, there's no limit to the amount of culture Samairah will have in her life. 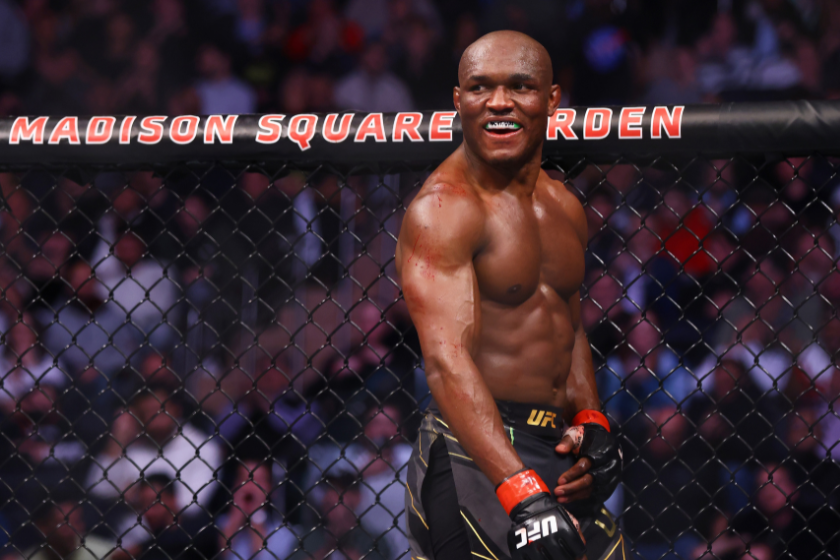 After defeating Leon Edwards in his UFC debut, Usman's net worth began to grow. According to Celebrity Net Worth, the UFC fighter has an estimated cash reserve of $3 million.

Usman has become a bankable star for Dana White and will look to defend his title again in a rematch against Leon Edwards at UFC 278 in Salt Lake City, Utah. The main event, which will air on ESPN, will surely have fans calling for the winner to face rising star Khamzat Chimaev.

UFC Welterweight champion, MMA fighter, multiple "Fight of the Night" award winner, the No. 1 fighter in the UFC's pound-for-pound rankings and NFL fan, Usman has many titles. His most important are husband and father.

This article was originally published on November 4, 2021, and has been updated since.

MORE: Conor McGregor's Net Worth: How Filthy Rich is "The Notorious" Today?