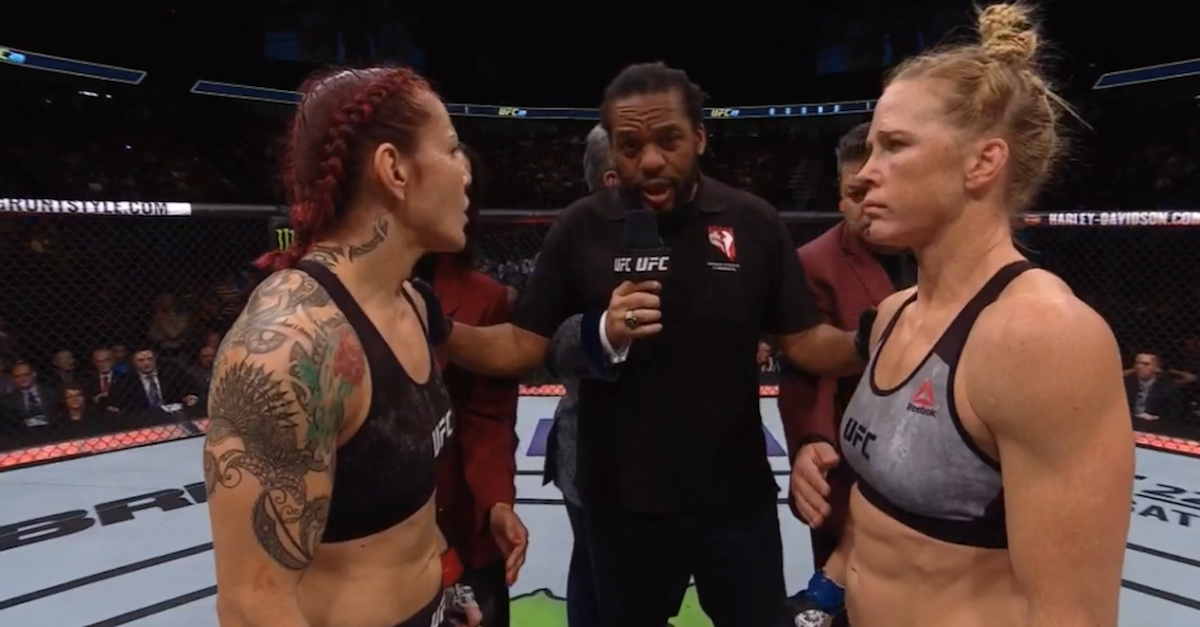 FanBuzz’s take: Holm 10-9 in the first round

Cyborg came out attacking in the second round, but Holm’s head movement remained consistent, moving away from the champ. Holm and Cyborg battled to a near draw in Round 2.

FanBuzz’s take: Cyborg 10-9 in the second round

It wasn’t pretty, but Cyborg continued attacking and Holm focused on counter strikes in much of the third. Cyborg finished the last part of the round with a brutal combo that appeared to have the challenger on the ropes.

FanBuzz’s take: Cyborg 10-9 in the third round

Cyborg picked apart Holm for much of the round, going after Holm’s midsection and face. She appeared to hurt Holm with about a minute left in the round, and the challenger simply survived.

Cyborg lands a flurry at the end of the round and catches Holm!!@CrisCyborg #UFC219 pic.twitter.com/AtWkW0tTWu

FanBuzz’s take: Cyborg 10-9 in the fourth round

Holm entered the fifth round with her left eye almost completely swollen shut. Holm threw head kick-punch combos, but couldn’t land anything substantial. Cyborg picked apart Holm, evading strikes and landing at will. Holm landed a nasty strike that seemed to have Cyborg hurt late, but couldn’t finish her.

Bloody and battered, but both show #Respect

What a fight! #UFC219 pic.twitter.com/dZBLRZBDg0

FanBuzz’s take: Cyborg 10-9 in the fifth round

Holm famously knocked out Ronda Rousey for the UFC Women’s Bantamweight Championship in November 2015. Her title reign lasted one bout, when she lost to Miesha Tate by way of submission by being choked unconcious.

She proceeded to lose back-to-back bouts to Valentina Shevchenko and Germaine de Randamie before knocking out Bethe Correia in June 2017.

Cyborg hasn’t lost since her debut in 2005, which she lost by submission in the first round.

Only two fights for Cyborg have gone to decision over her tenure.