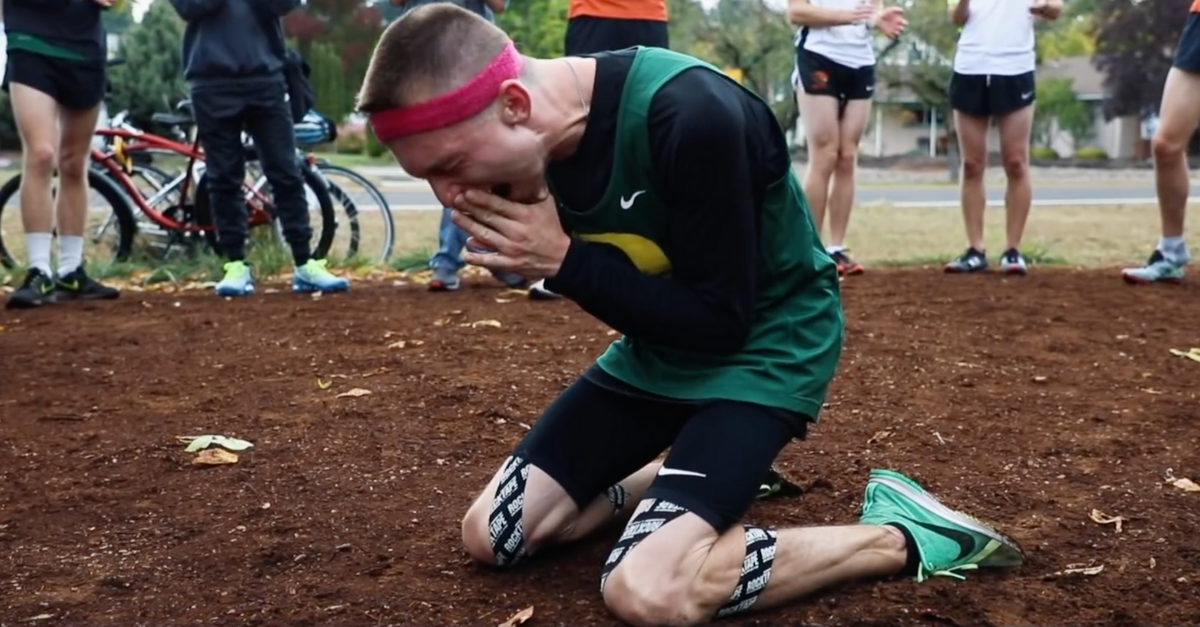 When Nike chose to sign former San Francisco 49ers quarterback Colin Kaepernick to become its biggest marketing face of 2018, the company was met with fierce backlash on one side and rising stock numbers and support on the other. The multinational sporting apparel giant is a whiz with signing the biggest names in sports, but they provide inspiration and support to the unknown athletes of the world, too.

For the first time, Nike signed an athlete with cerebral palsy when they surprised University of Oregon cross country runner Justin Gallegos with a professional athlete contract after his half marathon on Saturday October 6, which also happened to be World Cerebral Palsy Day.

Justin’s congenital disorder leaves him with limited control over his muscles and body coordination, but that hasn’t stopped him from competing as a member of the Oregon Ducks‘ track club. The 20-year-old has an Instagram following of around 8,000 people following his daily grind, and he’s even promoted companies like Rock Tape and Xendurance on his page.

“Therefore, since we are surrounded by so great a cloud of witnesses, let us also lay aside every weight and sin which clings so closely, and let us run with endurance the race that is set before us.”

The kid known as “Magic” has ran with an endurance few others can imagine, and it paid off when John Douglass, the insights director for Nike, showed up with the ground-breaking contract in hand.

You’re going to need a few tissues close by after you get done watching this moment captured by Elevation 0m.

In an Instagram post featuring the video, “Magic” thanked Nike and continued to show that perseverance, strength and determination trump any obstacle in life.

“Today on world Cerebral Palsy Awareness Day, I reached a milestone in my running journey! Today I made Nike history and became the very first athlete with Cerebral Palsy to sign a contract with Nike! You don?t realize how realistic and emotional your dreams are until they play out before your very eyes! Signing this contract was a huge success for me and I would not have made it without my friends and family and teammates! This was perhaps the most emotional moment in my seven years of running! Growing up with a disability, the thought of becoming a professional athlete is as I have said before like the thought of climbing Mt. Everest! It is definitely possible, but the odds are most definitely not in your favor! Hard work pays off! Hundreds of miles, blood, sweat, and tears has lead me here along with a few permanent scars! But the journey is damn sure not over!!! Looking back, I would guess there is only a few select people who would see me were I am today! I have gone through just about everything in the book to be where I am today! I was once a kid in leg braces who could barely put on foot in front of the other! Now I have signed a three year contract with Nike Running! Trust the process! And most of all trust in God! God is good! Thank you to all my friends, family, and teammates on running club, and now a brand new atmosphere on teammates with Nike! This moment will live forever! Thank you everyone for helping show the world that there is No Such Thing As A Disability!” — Justin “Magic” Gallegos, via Instagram

It’s an incredible thing to give help where it’s needed, but it really means something to give hope to those who don’t expect it.

Nike and Justin Gallegos are going to do great things together, and the running world found its newest superstar in a kid whose done everything to deserve the spotlight.