A lot can happen in ten years. Just think about a high school reunion. Those that were once the kings and queens of a school may be well past their prime. Those who were quiet, shy and sat alone at the cafeteria table may now be insanely successful. The fads of the school may now be completely dead whereas things that didn't even exist may be all that anyone talks about.

The same can happen for the NBA. Well, at least it did for the Oklahoma City Thunder. It's crazy to think that 10 years ago they were making a Finals push. This year, they were second to last in the Western Conference standings, their second straight season with only 20 wins, far removed from 10 years ago when they were in the NBA Finals. But we aren't here to trounce on today's version of the Thunder. We're here to look at that stacked 2011-12 team, who should've won a championship if it weren't for a gentleman named LeBron James.

Building A Team Capable of Starting a Dynasty 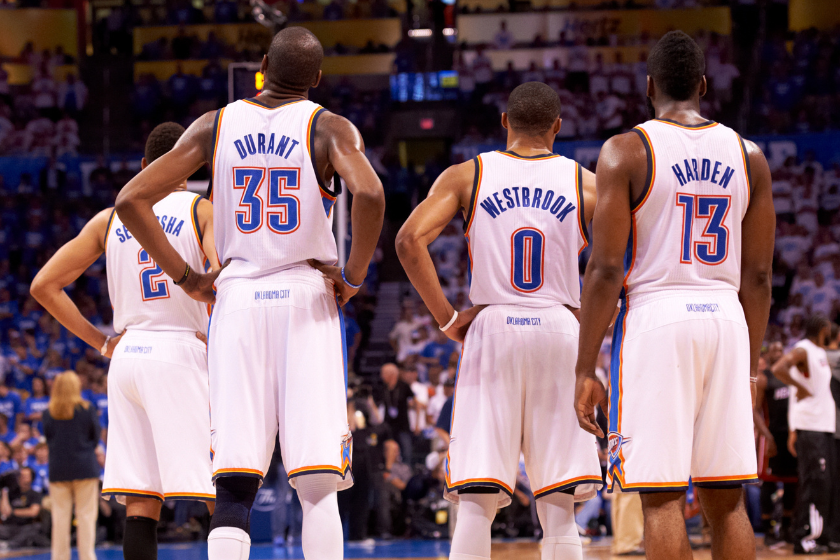 Now, before we jump right into that year, I think it's important to talk about the key points that led to that championship-seeking team. Of course, the biggest was the relocation of the Seattle SuperSonics. In 2006, Howard Schultz, who was the CEO of Starbucks at the time, announced he was selling the team to a group of Oklahoma City investors led by Clay Bennett. Bennett then announced in 2007 that the Supersonics were relocating to Oklahoma City. On September 3, 2008, the team name, logo, and color scheme were announced. The OKC Thunder was born.

Now, it's hard to do anything successfully in the NBA without great players and for the most part, you need multiple. The term "Big 3" gets thrown around a lot when discussing what it takes to win a championship in the NBA. The Bulls had a "Big 3" in the 90s with Jordan, Pippen, and Rodman, the Celtics did when they won in '08 with Garnett, Allen, Pierce, and obviously the Heat, who ultimately beat the Thunder in '12 and the Spurs in '13, with LeBron, Wade, and Bosh.

The Thunder are no exception. They acquired their "Big 3" over several years of fantastic draft picks. With the second pick in the 2007 NBA Draft, the then-Supersonics drafted a 6-foot-10 forward out of the University of Texas named Kevin Durant. The next year they used the fourth pick of the draft to select a 6-foot-3 guard out of UCLA named in Russell Westbrook. The very next year, the Thunder drafted James Harden, a 6-foot-5 shooting guard from Arizona State, as the third-overall pick. If it's not abundantly clear, that's an incredible run of draft picks. All three of these players have gone on to have MVP seasons. And, when they played together in Oklahoma City, they were borderline unstoppable.

The Thunder didn't just have these three studs on their team. They were stacked from top to bottom. Here's their starting lineup for the majority of the season and playoffs:

Coming off the bench as the sixth man, and who could've easily been a starter was James Harden. Other notable players on the roster included veteran Derek Fisher, Eric Maynor, Nick Collison, and Cole Aldrich. There really wasn't a weak spot on this team even when the bench was out on the floor.

The 2011-2012 Oklahoma City Thunder were in just their 4th season since the relocation. With Scott Brooks at the helm, the Thunder went 47-19 in the lockout shortened season. This was good enough to win the Northwest Division and finish second in the Western Conference. Both Russell Wilson and Kevin Durant were All-Stars that year, with the All-Star MVP award going to Durant. Durant was also the scoring champ, leading the entire league with 28 points per game.

The Thunder's Run to the 2012 NBA Finals 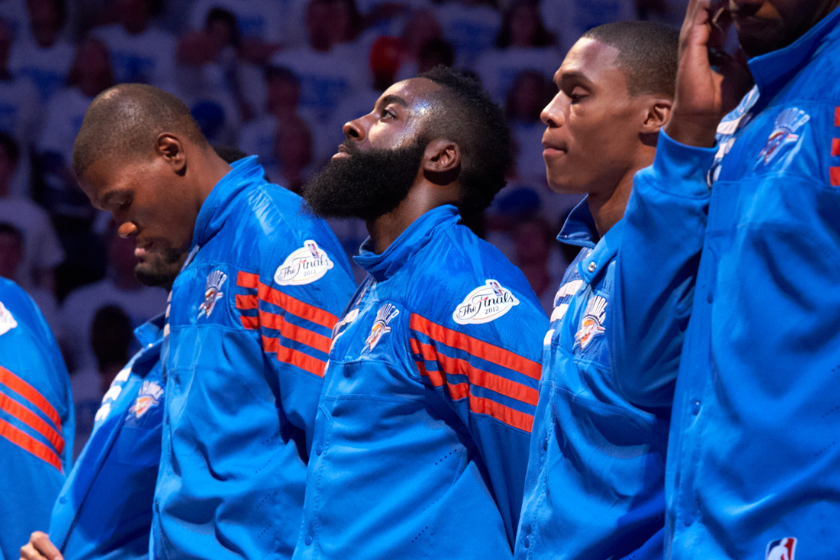 RELATED: The 17 Best NBA Teams That Didn't Win A Title

The Thunder didn't have an easy path to the NBA Finals, or they shouldn't have had an easy path given the historic relevance of the teams they played. In the first round, they faced the Dallas Mavericks, the defending NBA champs at the time. The Thunder easily swept them in four games. Next came the Kobe-led Los Angeles Lakers, which was another easy series for the Thunder, defeating them in a gentleman's sweep of five games.

Then came the Western Conference finals against the No. 1-seeded San Antonio Spurs. This was going to be the Thunder's toughest matchup to date -- and it was. The Thunder lost the first two games of the series in San Antonio and quickly fell down in the series 2-0. But despite the hole they dug themselves in, they were able to get out and win four straight to secure a trip to the NBA finals.

Now the only team I felt that could've beaten this Thunder's team was the Miami Heat, and that's who they played in the NBA Finals. The self-created "Big 3" in LeBron James, Chris Bosh, and Dwayne Wade was too much of a match for the lesser experienced Thunder. The Heat easily won the series 4-1. 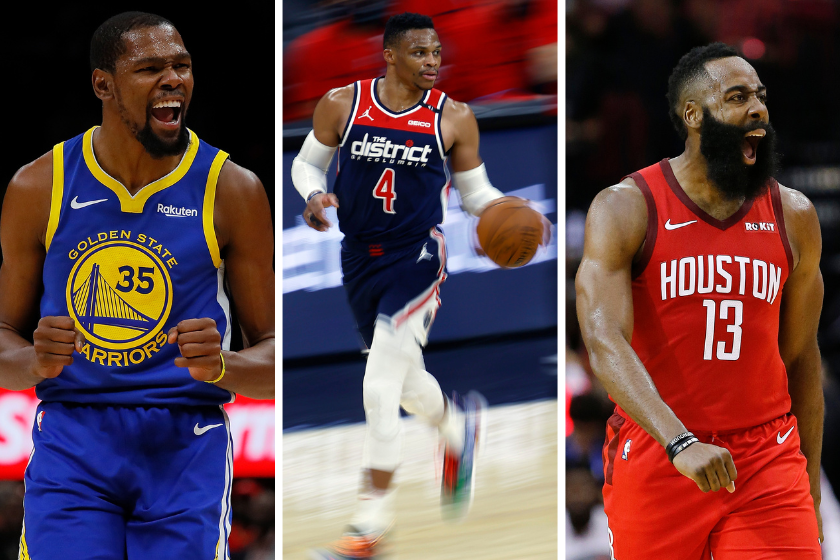 With a young core being as successful as they were, you would think the future of Oklahoma City Thunder at the time was extremely bright. Unfortunately, this was never the case. Egos became a problem for the Thunder. After the 2012 season, James Harden made it known he was not happy playing behind Durant and Westbrook and refused to sign a contract extension reportedly worth four years and $52 million. Knowing they couldn't get a deal done, the Thunder traded Harden to the Houston Rockets. Both Durant and Westbrook stuck around. But despite the two stars, the Thunder never made it back to the NBA Finals. They lost twice in the Western Conference Finals: once to the San Antonio Spurs in 2014 and once to the Golden State Warriors in 2016.

Speaking of the Warriors, at the end of the 2016 season, there was a lot of speculation about where Durant was going to go. Clearly, he wanted to win a championship and it was looking like the window for the Thunder to do so was closed, or very much about to be closed. In a "well if you can't beat them, join them" mentality, Durant chose to join the mega team that was the Golden State Warriors, signing a two-year, $54.3 million contract. Durant would go on to win two championships with the Warriors.

With two of his star teammates gone, Westbrook took over the team in a big way. He finished the 2016-2017 season averaging a triple-double and won the NBA MVP award. He would follow that up with two more triple-double seasons, marking three in as many years. But, despite his out-of-this-world numbers, Westbrook couldn't help the Thunder get out of the first round of the playoffs. In 2018, he was traded to the Houston Rockets. And like that, the core of the 2012 NBA Finals was gone.

It's interesting that the Thunder has never won a championship. You can make an argument that the 2011-2012 is the greatest team never to win a Finals ring. They were young and fun to watch. Maybe if it weren't for a date with LeBron James, this team would've figured out a way to make their core happy, and find immense success like the 90s Bulls or the 2000s Lakers. But hey, hindsight is 20/20. And as the viral sound has said, "I guess we'll never know."