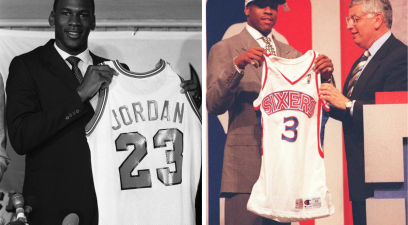 Where would sports be without nicknames? It’s not enough to just be a good player. You have to have a great moniker to truly be remembered. Just take a look at Shaquille O’Neal. He’s got an endless amount of nicknames, from The Big Aristotle to Shaq Diesel. And they’re all terrific.

This is especially true for basketball players, for whom branding can be singularly important. But which are the best nicknames in NBA history? Who had the most memorable monikers?

Many of these have a ton of thought put into them, like “The Microwave,” because a player could get hot within a minute’s notice. Some, however, are pretty simple yet perfect twists on their names.

Here are 10 of the best NBA nicknames in history, from “Big Shot Bob” to “The Round Mound of Rebound.” Who did we leave off?

Nobody would ever have described the Detroit Pistons’ Vinnie Johnson as a star. He never made an All-Star team, he never averaged over 16 points per game, and he certainly didn’t make the Hall of Fame. But that scoring is more impressive than it looks, because Johnson was never a starter in his entire career. His role was bench scoring on two championship teams, and that’s where his nickname comes in: they called him “The Microwave” because he could get hot at a moment’s notice.

Robert Horry never made an All-Star team, yet he has an outside chance at the Hall of Fame. How? Because for 16 years, he seemed to hit every crucial shot imaginable in arenas around the league. He won seven championships with three different teams (the Houston Rockets, Los Angeles Lakers and San Antonio Spurs), and seemed to contribute directly to every one of them with at least one timely score.

Darryl Dawkins played for the Philadelphia 76ers, New Jersey Nets, Utah Jazz and Detroit Pistons, and he deserves credit for being the only basketball player to not only have multiple nicknames (some of which he gave himself, although his most famous, Chocolate Thunder, was courtesy of Stevie Wonder) but to nickname all of his own dunks. He had a ton of these, but none were creative than the “The Chocolate-Thunder-Flying, Robinzine-Crying, Teeth-Shaking, Glass-Breaking, Rump-Roasting, Bun-Toasting, Wham-Bam, Glass-Breaker-I-Am-Jam.”

This has to be the cruelest nickname in sports history. Ervin Johnson shared his name (almost) with Earvin Johnson — better known as “Magic Johnson,” one of the best players in NBA history. Ervin, though…well, he wasn’t quite as magical, leading to this deeply insulting (and hilarious) moniker. Ouch, man.

Gervin didn’t get this nickname for a cold, robotic demeanor; he was known to be quite animated. Instead, he got it for the smooth, slick, utterly calm way in which he scored — and score he did, as he’s one of the greatest pure scorers in NBA history for teams like the San Antonio Spurs and Chicago Bulls. Everything about George Gervin was smooth as ice.

There have been a lot of good nicknames in league history, but maybe none are more accurate than point guard Gary Payton’s. Payton was known for stifling, incomprehensibly tight defense while playing for teams such as the Seattle SuperSonics, Milwaukee Bucks, Los Angeles Lakers, Boston Celtics and Miami Heat. By many reckonings, he’s the greatest perimeter defender of all time. It’s possible no nickname ever fit better than “The Glove.”

This isn’t quite your average rhyming nickname. That’s probably where it started, but Hakeem Olajuwon is probably the most unique player in NBA history: an impossibly agile, impossibly athletic 6-foot-10 string bean whose play — especially in the playoffs — felt like it was coming out of a dream. His nickname also informed his signature move: “The Dream Shake,” a low-post spin-pivot that had to be seen to be understood.

Tim Duncan was simultaneously the best power forward ever, and the least exciting basketball superstar ever. His nickname reflects that: Duncan’s game was based on an ironclad, peerless mastery of basketball fundamentals that led him to two MVP awards and five championships. Sometimes nicknames write themselves.

Nik Stauskas was not a great NBA player. He wasn’t even really a good one. But he did have the greatest accidental nickname ever. For some reason, during one game, closed captioning changed his name to “Sauce Castillo.” The internet lost its absolute mind, and the moniker stuck.

Charles Barkley might be better known for the nickname “Sir Charles,” but none can top “The Round Mound of Rebound” from his college days at Auburn. Barkley was a great rebounder at power forward despite standing at only 6-foot-6. He’s also notable for having more nicknames than probably any player in NBA history. We didn’t even have space to list all of them.