While Woj's tweet is getting a lot of attention, it's important to cut through the headline and look at what facts are being said. Woj only says the Celtics, who lost to the Golden State Warriors in the NBA Finals last season, have been in contact with the Brooklyn Nets and their ability to include All-Star forward Jaylen Brown would make for an attractive trade package. Brown is likely the most attractive piece that has been rumored to be offered so far.

The Plot Thickens in the Kevin Durant Sweepstakes

Around five hours later, we got a Shams Bomb from The Athletic's Shams Charania taking things a bit further.

Sources: The Boston Celtics have offered a Jaylen Brown package to the Nets for Kevin Durant, which Brooklyn turned down and countered.

Full details on a potential Celtics-Nets mega-deal to be had, latest on Donovan Mitchell and more at the Inside Pass: https://t.co/Gkyfkhg5A1

Shams stated the Celtics have been in trade talks with the Nets and have actually offered Brown, guard Derrick White (who the C's acquired from the Spurs last season) and a pick for Durant. Shams also said the Nets quickly rebuffed this offer and requested Marcus Smart be included over White and demanded additional draft picks and another rotational player.

From there the Twitter-sphere was off and running. The most popular narrative was how could the Celtics treat Brown this way after his role in bringing the team so close to a championship? This wasn't the same betrayal as the Isaiah Thomas trade, but the Celtics being the bad guys in this was a clear message.

Are we 100 percent sure that's what is happening here though? Are the Celtics really taking advantage of one of their star young players, or are things not exactly as Twitter would make you believe?

Let's take a look at three areas that might make fans view the Celtics' role here a bit differently:

1. Brown's Response Might Not Be What You All Think

Shortly after everything broke on Twitter Brown posted his own view of the situation.

Do we know what he meant by "SMH" here? No, but this is the Internet, and the worst-case, most dramatic reasoning HAS to be what's going on.

So that's what everyone assumed. Brown's pissed and is "shaking my head" at the audacity of the Celtics even taking a potential trade call about him.

But why does it have to be that? Isn't it just as likely that Brown and the Celtics know exactly where they stand with each other? Why can't it be that Brown knows the Celtics value him immensely and these trade rumors are clearly coming from somewhere else? After all, the Celtics trading within the Eastern Conference is not something to be taken lightly.

The Celtics do not gain anything with these rumors, but the Nets do. Brooklyn is likely unmotivated by the players they have been offered so far, so leaking a potential package including an All-Star wing in his mid-20s could change that. Remember, the Nets are working with a roster where their best players are Ben Simmons and Kyrie Irving, the latter of whom spoiled a Russell Westbrook swap to rejoin LeBron James on the Lakers. So, needless to say, the Nets need a lot from this Durant deal. Maybe Brown is simply "shaking my head" are how ridiculous the offseason bartering system has gotten in the NBA.

2. Being Traded for Durant is More Compliment Than Insult 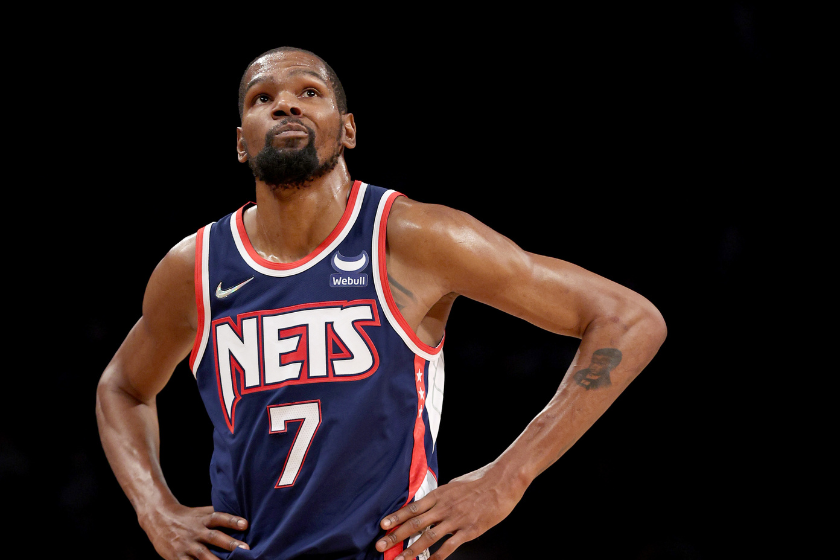 Related: The Only Person on the Brooklyn Nets With Something to Prove is Steve Nash

Ok, let's say the rumored deal from Shams is true. The Celtics offered Brown/White/probably a first-round pick for NBA Superstar Durant, which the Nets promptly declined. Doesn't that show how highly Boston views Brown? The Nets said they expected the highest return in NBA trade history and the Celtics felt Brown fit the criteria to win the Durant sweepstakes.

Now, obviously Brown alone isn't enough for a top 10-15 all-time player, even if Durant is eight years his senior. But Brown being the focal point of a deal for a Hall of Fame player at the end of his prime is still a massive achievement for his young career. In this rumored offer, the Celtics felt it was feasible to only add a role player in White and a single pick.

I'm someone well experienced in offering (fantasy) trades that start off too low and piss off the other team to the point a trade can't happen. Brad Stevens showed this past season he knows what he's doing, so while it's an initial offer it's also not an absurd one. This tells you how valuable Boston views Jaylen Brown.

No player wants his team to outwardly show they want someone else over them. But if you're going to get traded, don't you want to be traded for a two-time Finals MVP?

3. What If Brown Already Has an Exit Plan? 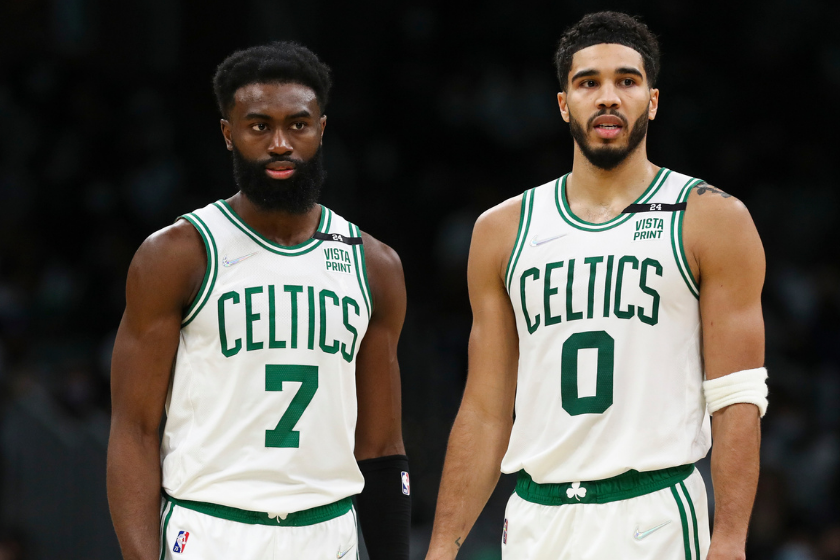 Brown has two years left on his current contract. The extension he signed in 2019 was for less than the max, which is the target every player strives for. Brown is going to want every last penny as he's now being underpaid. The Celtics will be able to offer him the most money, but Brown might also want a chance to be the sole star of his own team.

This is something many players want if the opportunity presents itself, and it'd be difficult for anyone to fault Brown for this desire. However, if this is what Brown ultimately wants and has at the very least not shown the Celtics, he will 100 percent resign, then it'd be irresponsible to not examine a swap for Durant (who has four seasons left on his deal).

Durant is older, and his contract is bloated ($53 million as a 37-year-old!), but losing Brown for nothing in the summer of 2024 to free agency is a doomsday scenario for Boston. A Brown free agent departure could EASILY be followed by a Jayson Tatum trade request, which the franchise would likely not recover from for many, many seasons.

This is the stuff of Stevens' nightmares, and he can't be seen as the architect of that haunted house. And just like how you can't blame Brown if he wants to be The Man (trademark Taylor Swift), you can't blame the Celtics for exploring ways to take a Brown/Tatum double departure off the table.

So What's Next for One-Half of the Celtics Dynamic Duo? 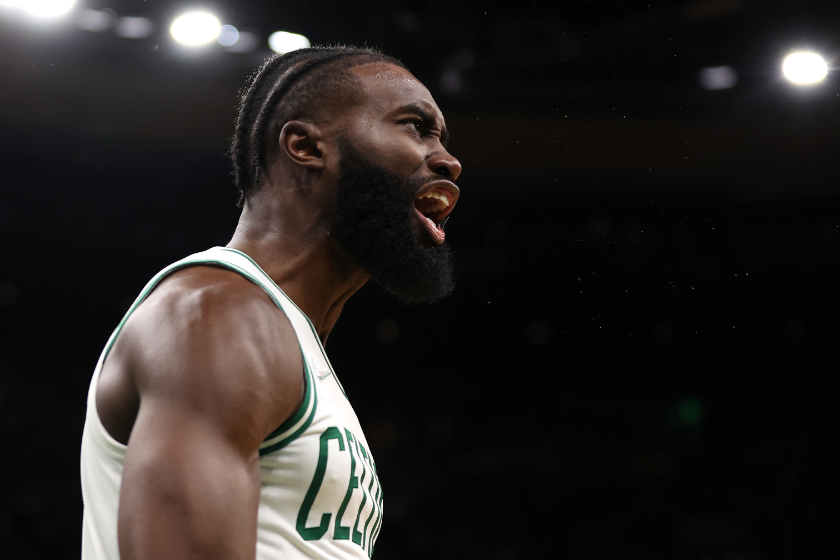 RELATED: How Ime Udoka Turned the Celtics Around Overnight

I love Jaylen Brown. I have never wanted the Celtics to break up the Brown/Tatum duo as having two All-Star wings in their mid-20s seems like the goal for every franchise. I can't understand the thinking that trading Brown away makes the future of this team an iota better.

Unfortunately, we don't live in that vacuum, and other factors must be considered. It's important to remember Brown being mentioned in trades for Durant takes nothing away from him as a player and does not mean the Celtics view Brown any less than what he is.

This whole situation stinks, and I do not envy Brad Stevens a bit. Kevin Durant trade rumors begin circling about him potentially joining your team is a difficult thing to be upset about, but that just speaks to how special Jaylen Brown is and how much Celtics fans love him.

For now, all we can do is appreciate what we have and hope Brown recognizes how important he is to the Boston Celtics: