I spit out my coffee when I heard the news -- the news that shook the sports world to its core. Yes, it's true. Kyrie Irving and the Brooklyn Nets are at an impasse.

It's hard to believe Irving and the Nets can't figure things out given the star point guard played a whole 29 games this year, bringing his total regular season appearances to 103 out of 216 contests since joining the franchise in 2019. Irving has a littered injury history, but his resistance to comply with New York City's COVID vaccination mandates was the reason he missed a majority of this last season.

Nonetheless, Irving's talent can't be denied. When he was on the court this year, he poured in 27.4 points and dished out 5.8 assists per game. He's one of the most dynamic players on the planet, yet he's soured his relationship with every team he's been a part of.

So, I'm sure Brooklyn fans were thrilled when Irving said he doesn't plan on going anywhere after the Nets were swept by the Boston Celtics in the first round of the NBA playoffs. Sound familiar, Boston fans?

But hey, at least Nets can take comfort in general manager Sean Mark's comments after the season ended.

"We're looking for guys that want to come in here, be part of something bigger than themselves, play selfless, play team basketball, and be available," Marks sad. "That goes not only for Kyrie but for everybody here."

Kyrie transparently responded in a tweet. I couldn't have said it better myself.

a picture worth a few words. pic.twitter.com/OhGjiolPfL

Anyway, The Athletic's Shams Charania was the first to report Kyrie and the Nets were at a standstill. Irving has until June 29 to determine whether he'll accept his $36.9 million player option for the 2022-23 season, however, talks have stalled because I assume Irving wants more money and Brooklyn isn't willing to give it to him -- thus, clearing the path for Irving to consider the open marketplace this offseason.

And who are the front-running suitors? The Los Angeles Lakers and New York Knicks. The basketball gods have given us an awesome gift. It would be entertaining to see Kyrie play in Manhattan because few players are as well equipped to play a million minutes per game under head coach Tom Thibodeau. But, it wouldn't be near as fun as reuniting with LeBron James. And guess what? There happens to be another disgruntled point guard in Los Angeles.

Kyrie Irving for Russell Westbrook: A Trade Made in Heaven 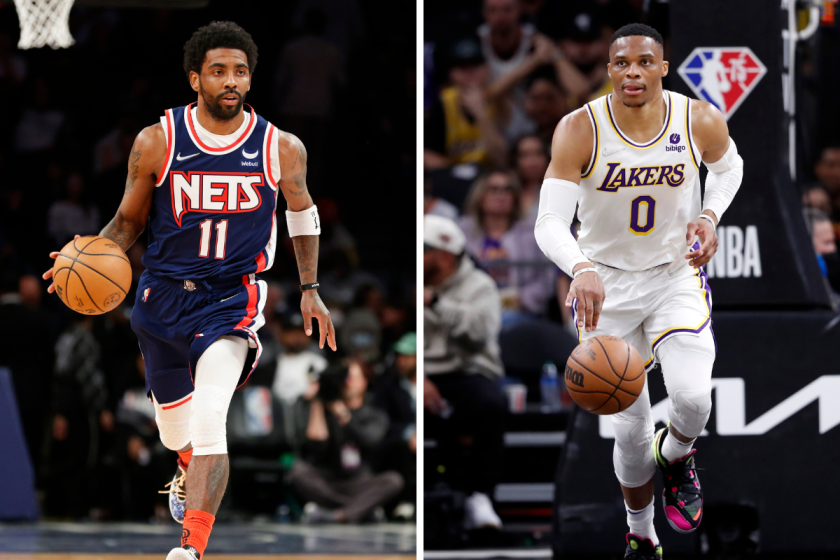 RELATED: The Los Angeles Lakers All-Time Starting 5 is a Who's Who of NBA Legends

According to Tony Soprano, "remember when" is the lowest form of conversation. I have to disagree when it comes to sports, though. For those of us who are fans of cursed franchises and live for the hypothetical, "remember when" is our first language.

So, remember when the LeBron James and Kyrie Irving were teammates on the Cleveland Cavaliers and Kevin Durant and Russell Westbrook were teammates on the Oklahoma City Thunder in 2016? James and Kyrie, of course, led the greatest comeback in NBA history by overcoming a 3-1 lead held by the Golden State Warriors in the Finals. Durant and Westbrook, of course, famously choked away a 3-1 lead to that same Warriors team in the Western Conference Finals.

Kyrie stuck around on the Cavs for another year before bizarrely demanding a trade, and Durant became everyone's favorite villain when he embodied the "if you can't beat em, join em" mentality and joined the Warriors in free agency -- both amicable breakups where they remained friends with their respective co-stars. Fast forward to now. You're telling me we have the opportunity to reunite these two duos? Sign me up.

Durant and Westbrook is the less exciting of the two. Durant only cares about hooping but his time in Brooklyn has fallen well short of expectations. Say what you want about Westbrook, the dude at least cares despite yeeting the ball in whatever direction the hoop is in. We can't forget about the Ben Simmons variable, either. Ok, maybe this scenario is more exciting than I initially thought. I want it purely for Durant's subtweets.

But, LeBron and Kyrie getting back together would be absolute gold. Kyrie was upset about living in LeBron's shadow in Cleveland? I only dream of the Kyrie now -- the version who's a square peg to every circle locker room  -- teaming up with LeBron again. In LA of all places, too. Seeing how the Westbrook experiment went this past season, imagine Kyrie in that same situation. Would LeBron take what he learned when reading "The Godfather" and apply it to real life? Anthony Davis also in the mix? C'mon. And look, I'm a LeBron fan, but I can't deny how funny this timeline would be.

As for how a Kyrie and Russ trade would logistically work, I can see every team in the league clamoring to take on Russ' $47 million contract this year, so the Nets will have some competition. However, the Nets would need to add another player or some picks to Kyrie's $36 million salary to match the salaries. Heads up: the extent of my salary cap knowledge stems from my experience playing MyGM on NBA 2k11 over Christmas break my junior year of high school. No need to check for accuracy.

I implore Pelinka and Marks to make it happen.