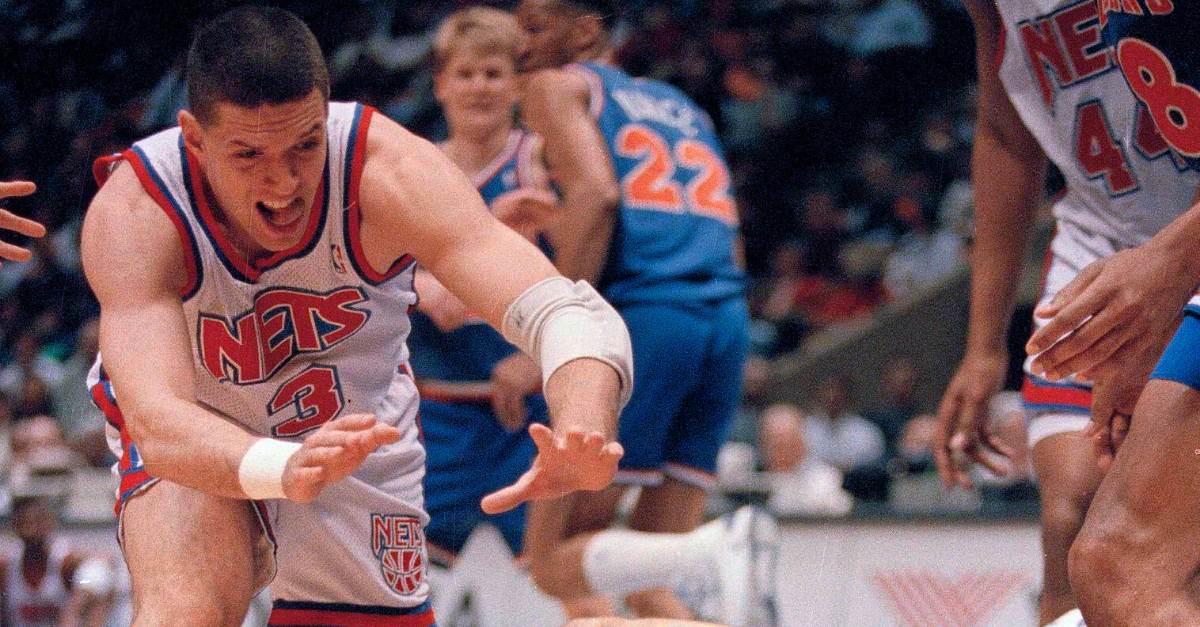 The Croatian basketball player steadies off one leg with the balance of a ballerina. He deftly leans backward to avoid his defender and rises for the shot, the one coaches never teach you and comes with hours upon hours in the gym. Swish.

Drazen Petrovic made it look easy, much like everything he did on the basketball court. He lived and breathed the game with tenacity illustrated through fist pumps and trash talk in four different languages. It was all he knew.

Nearly 27 years after his death in a 1993 car accident, the shooting guard‘s impact changed the NBA landscape forever.

The Sibenik, Croatia native started playing professional basketball at 13 and rose quickly through the European ranks. He played six years for Croatian club Sibenka before serving his mandatory year in the Yugoslavian military. Once he returned, the shooting guard joined the Zagreb-based team Cibona.

He averaged 35.8 points in four seasons with Cibona, capped off by a 112-point performance in the Yugoslavian league and multiple European championships. However, Petrovic craved new challenges.

He was drafted by the Portland Trail Blazers in the third round of the 1986 NBA Draft but delayed his United States debut in favor of joining Spanish club Real Madrid. He played one season in Spain, continuing his dominance, and joined the Blazers for the 1989-90 season.

Adjusting to the NBA was a struggle. There was a stigma around the league concerning European players lacking physicality and defensive prowess. The Blazers valued Petrovic as a scorer but feared the rest of his game wasn’t up to NBA standards. He played minimal minutes amongst a crowded backcourt that included Clyde Drexler and Terry Porter.

Brewing with frustration, Petrovic demanded a trade and was dealt to the New Jersey Nets just 38 games into the 1990-91 season.

Petrovic flourished with the Nets. His playing time increased to 20.5 minutes per game along with a 12.6 scoring average. The next season, he assumed a starting role and formed a strong backcourt with rookie point guard Kenny Anderson. His scoring averaged increased to 20.6 points and the Nets reached the playoffs for the first time since 1986. They lost to the Cleveland Cavaliers in the first round.

That summer, Petrovich led the Croatian national team to a silver medal in the 1992 Barcelona Olympics, falling only to the Dream Team. It was his only appearance for the freshly independent Croatian squad after previously competing with Yugoslavia.

The 1992-93 season was Petrovich’s best. He played 32 minutes per game, averaged 22.3 points per game, and notched a 52 percent field goal percentage.

Despite the success, he wasn’t invited to the 1993 All-Star game. The team reached the playoffs and fell to the Cavaliers once again. Petrovich earned Third-Team All-NBA honors.

Following the playoff elimination, Drazen joined the Croatian team in Berlin for a 1993 FIBA EuroBasket qualification tournament. At the conclusion of the tournament, he decided to skip the team flight to Zagreb and instead drove back with girlfriend Klara Szalantzy. Inclement weather affected driving conditions on Autobahn 9 southbound towards Munich.

Petrovic died in a car crash with a semi-truck near Ingolstadt, Germany on June 7, 1993. He was asleep in the passenger seat at the time of the accident and died on impact. Szalantzy and fellow passenger Hilal Edebal suffered grave injuries.

“Dra?en Petrovi? was an extraordinary young man, and a true pioneer in the global sports of basketball. I know that a lasting part of his athletic legacy will be that he paved the way for other international players to compete successfully in the NBA. His contributions to the sport of basketball were enormous. We are all proud of the fact we knew him.”

The NBA star’s journey was halted too early, but his game and heart influenced a generation of international players in the NBA. His 3-point shooting and playmaking ability previewed the current NBA iteration two decades before it took shape. The path for Luka Doncic, Giannis Antetokounmpo, Kristaps Porzingas, Nikola Jokic, Rudy Gobert, and Goran Dragic was cleared by Petro.

‘The Mozart of Basketball’ — as he was called in Europe — wrote symphonies when he took the court. He went toe-to-toe with Michael Jordan. He cemented himself as one of the great players of his time. His No. 3 is retired by the Brooklyn Nets and his memory is enshrined in the Basketball Hall of Fame.

His greatest work was still ahead of him, but his legacy built today’s NBA.

MORE: Luka Doncic’s Mom is The Real MVP of His Basketball Journey