Sameness is a word of emphasis when talking about officiating in the NBA. It is imperative refs put biases aside and treat every player and coach the same. The same goes for how coaches and players treat refs.

However, who is officiating is what the NBA truly means by the word. Last season, the NBA had 75 full-time officials, and of those 75, six were women. Those six were Lauren Holtkamp-Sterling, Natalie Sago, Ashley Moyer-Gleich, Simone Jelks, Jenna Schroeder and Danielle Scott.

The league has had at least one woman referee since 1997 -- the first two being Violet Palmer and Dee Kantner -- but recently, it's taken steps to grow that number not just for the sake of inclusion, but because they want to find the best people for the job.

"It's really satisfying to say, 'We don't have to go and search for women referees,'" said Monty McCutchen, the NBA's senior vice president, head of referee development and training. "All we have to do is find the best referees -- and open our eyes to half of the population."

So, the NBA has tripled the number of female refs on their roster over the past 25 years. But, what separated this group of six from other candidates?

Female NBA Referees Are Becoming a Normal Part of the Game 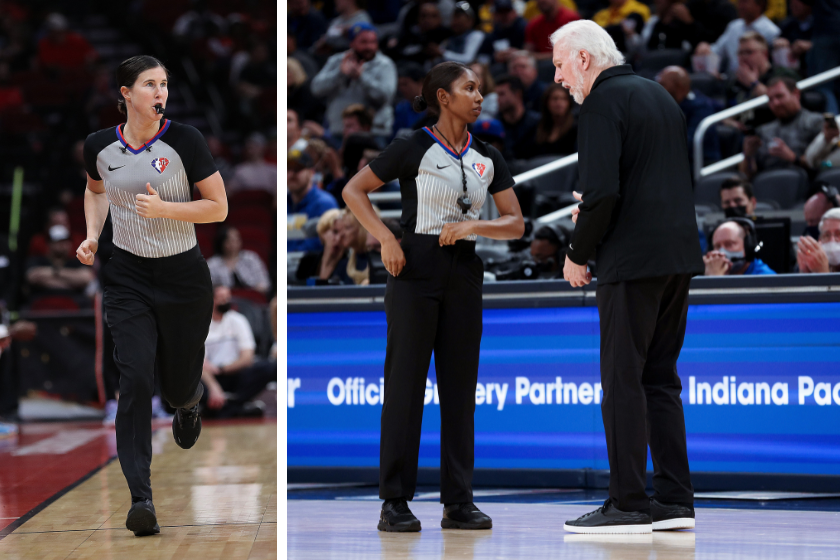 RELATED: How Much Do NBA Referees Make?

Lauren Holtkamp-Sterling is the longest-tenured ref of the group, having begun her NBA career in 2016. Before that, she reffed various high-level NCAA basketball games in the ACC, Big Ten, Big 12, Big East and Colonial Athletic Conference before moving to the NBA G-League. Her six years in the G-League propelled her to the big stage. Her husband Jonathan Sterling is also an NBA referee.

Natalie Sago has reffing in her blood. Her father was a high school basketball and college ref, and she spent a lot of her early days traveling with him. She got her professional start in the WNBA, which was a big deal for her because she grew up idolizing players such as Candace Parker and Diana Taurasi.

Ashley Moyer-Gleich has been a hooper her whole life. She played through college and worked her way up the high school, college, G-League and WNBA ranks before becoming a full-time NBA official in 2020. She spends most of her free time digesting film or talking with her coworkers about ways to improve her craft when she's not spending time with her family.

Simone Jelks quickly rose through the referee world after her playing days at USC. She officiated in the G-League and collegiately in the Mid-American and Horizon Leagues before becoming a full-time referee in the NBA last season.

Jenna Schroeder was casually reffing AAU games when she realized she could make a career as a zebra. She ground her way to the world's best basketball league by working and working and working -- putting in seven-day work weeks during a six-month span at one point. 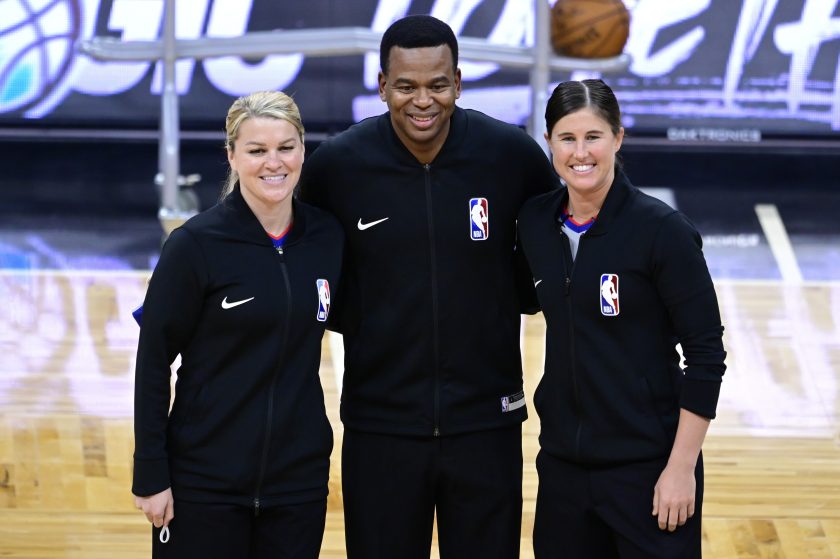 Natalie Sago and Jenna Schroeder pose with Sean Wright before officiating a game together on January 25, 2021. It marked the first time in NBA history two women were officiating in the same game. (Photo by Douglas P. DeFelice/Getty Images)

Danielle Scott, the newest ref of the bunch, worked her way up through the G-Leauge and WNBA much like her colleagues. At 31, Scott has loads of experience at all levels of basketball and looks to be a staple in the NBA for a long time.

As you can see, each woman's path to the NBA isn't abnormal to that of a male referee. However, women referees face different kinds of scrutiny than their male counterparts. For example, female officials are called "too sensitive" if they make a lot of calls, particularly when players show a lot of emotion that can be seen as "part of the game". Despite this, Jelks says that players and coaches must be held to the same standard across the board even if she as a ref may be criticized.

"And if it were male officials, you wouldn't call them sensitive," she said.

You would probably just call them bad at their job, which is the whole point. Women referees are more criticized for being a woman than their actual skills. But, this group of six is proof the tides are changing. Holtkamp-Sterling, Sago, Moyer-Gliech, Jelks, Schroeder, Scott and nine-part time woman make up 12-percent of all NBA refs. Don't be surprised when that number continues to increase. As of March 2022, 42 percent of NBA G-League refs are women. Seeing how all six of the full-time NBA female referees made a stop in the G-League before getting called up to the show, we're on the cusp of several more joining the party. 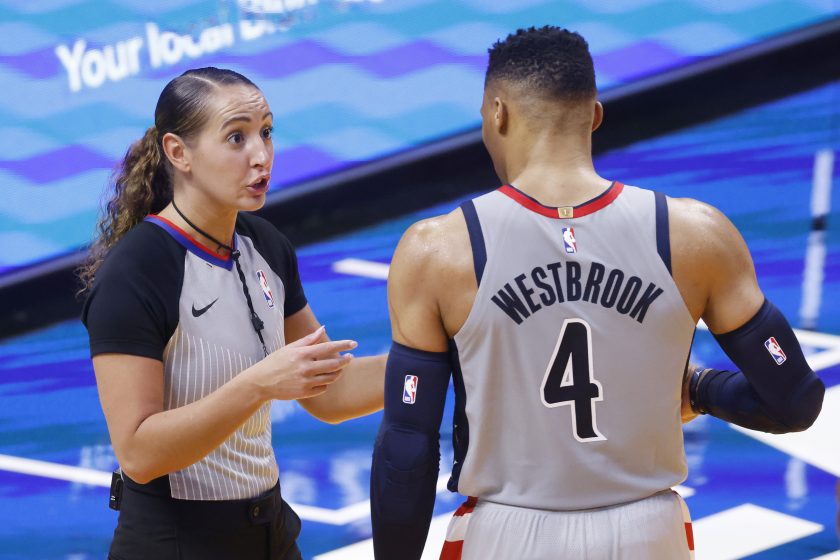 Ashley Moyer-Gleich talks with Russell Westbrook during a game on February 5, 2021. (Photo by Michael Reaves/Getty Images)

"I feel like women, especially women in male-dominated industries, always in the back of our heads, there's a little space, no matter how well we are doing, like 'Am I good enough?' and the answer will always be yes," said Jelks.