What Happened to the Fan Who Started “Malice at the Palace”? 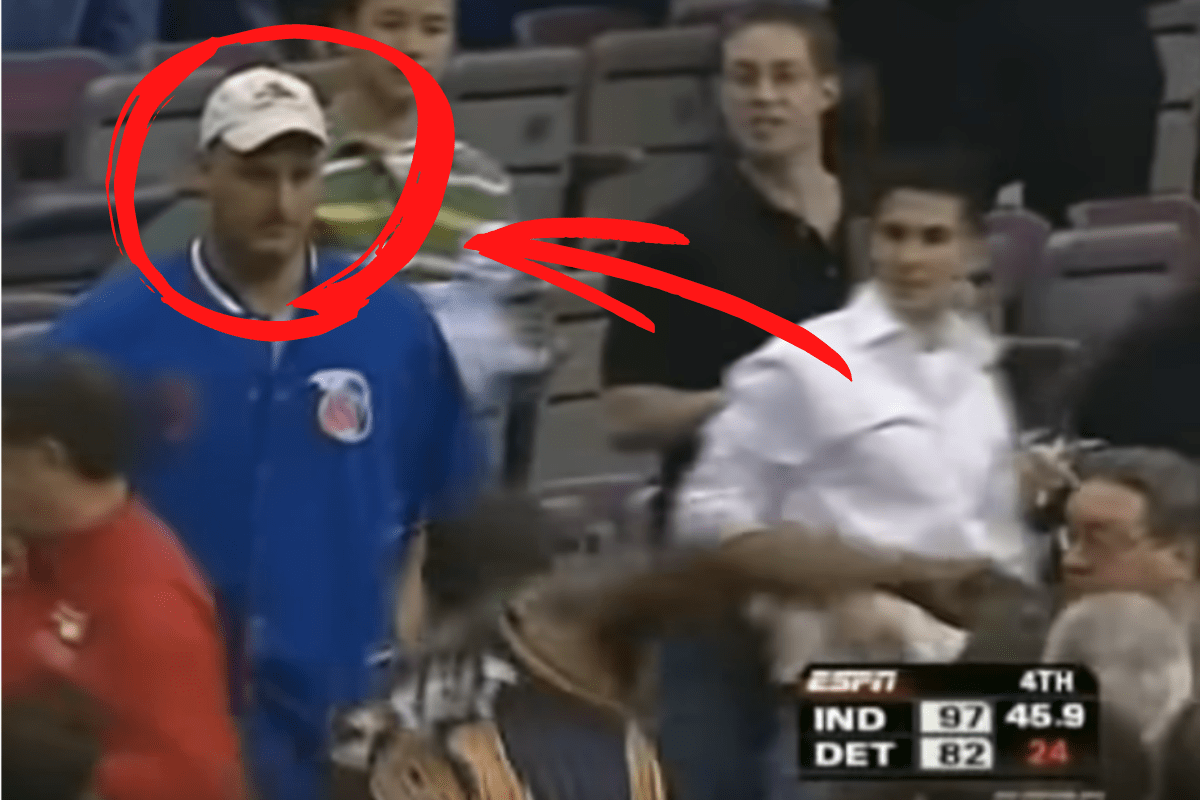 The “Malice at the Palace” is a “where were you when?” sports moment.

I was 10, watching “SportsCenter” cover it every morning before school. I had never seen anything like it.

A lot of people remember a beer hitting Indiana Pacers forward Ron Artest (now Metta Sandiford-Artest) on the scorer’s table and him beelining into the stands to find the thrower.

Then, all hell broke loose.

Artest received a lot of the blame for starting the NBA’s most infamous brawl, but how about the guy who threw the drink?

That guy is John Green, and shockingly, he and Artest have formed an unlikely friendship.

The “Malice at the Palace”

15 years ago today all hell broke loose when someone threw a cup at Ron Artest. The Malice at the Palace lives on in infamy pic.twitter.com/JAuaaejupV

RELATED: ?Malice at the Palace? Lives On as Basketball?s Ugliest Brawl

There was a lot of tension going into the Detroit Pistons and Indiana Pacers game on November 19, 2004, at the Palace of Auburn Hills in Auburn Hills, Michigan. The two teams were already rivals, and a Detroit win in the Eastern Conference Finals the previous year only increased animosity.

Fast-forward to the last minute of the fourth quarter and Artest fouled the Pistons’ Ben Wallace as Indiana held a 97-82 lead. Wallace aggressively shoved Artest after the call.

Artest then went to lay down on the scorer’s table. In the stands, a fan named John Green hurled his drink and the cup hit the NBA player squarely in the chin.

Artest leaped in the stands and started wailing on some poor Pistons fan who wasn’t Green. Multiple fans tried to restrain him. Stephen Jackson followed Artest to back him up.

The rest of the altercation was ugly. The ESPN announcers were in disbelief. The whole arena was in a frenzy. The fight eventually wound down and the game was called.

Artest was suspended for the rest of the season and Jackson for 30 games. Other Pacers players such as Jermaine O’Neal, Anthony Johnson, Reggie Miller were also suspended. For Detroit, Ben Wallace, Chauncey Billups, Derrick Coleman and Elden Campbell received punishment.

The Pacers were in prime position to make a deep run in the NBA playoffs, but the avalanche of suspensions ruined their chances.

Who is John Green?

Green was later discovered to be the fan who threw the cup at Artest. He was recognized by former Oakland County prosecutor David Gorcyca, whose neighbor used to date Green.

Green was banned from Pistons home games as well as dealt a 30-day jail sentence and two years probation after being found guilty for assault and battery. He said he merely lobbed the cup in the air without intent to hit anyone.

It’s been more than 15 years since the melee, but the event was brought back into the public light with the release of the Netflix docuseries “Untold: Malice At The Palace.”

All the parties involved spoke on camera to discuss the brawl at length, including Green. The guy doesn’t seem to have much remorse and had a criminal record before the incident.

Green said him and Artest developed a friendship after the NBA star reached out to him on Twitter. According to the IndyStar, Green and Sandiford-Artest (who went by Metta World Peace at the time) did a radio interview together in 2009.

They did another interview together in 2012.

“Ron’s a good guy,” Green later said of Sandiford-Artest in a radio interview on ESPN Los Angeles in 2012, according to IndyStar. “And you wanna know what? I like to think the same thing about myself. Yes, I?ve made bad choices and maybe Ron has, too, but I think he and I are very similar. We’re very passionate people, but we admit when we’re wrong, too…We just started talking and we hit it off. He apologized and I did…It came from him and it takes a lot to do something like that.”

Shockingly, the guy who started the whole thing received the least amount of physical damage. Artest attacked the wrong person and fan Charlie Haddad was clocked multiple times by the players.

We saw the New York Knicks and Miami Heat brawl back in 1998. We’ve seen pretty much every team from the Los Angeles Lakers, LA Clippers and Boston Celtics involved in some type of altercation.

Those all pale in comparison to the the”Malice at the Palace”, which remains one of the ugliest moments in NBA history.