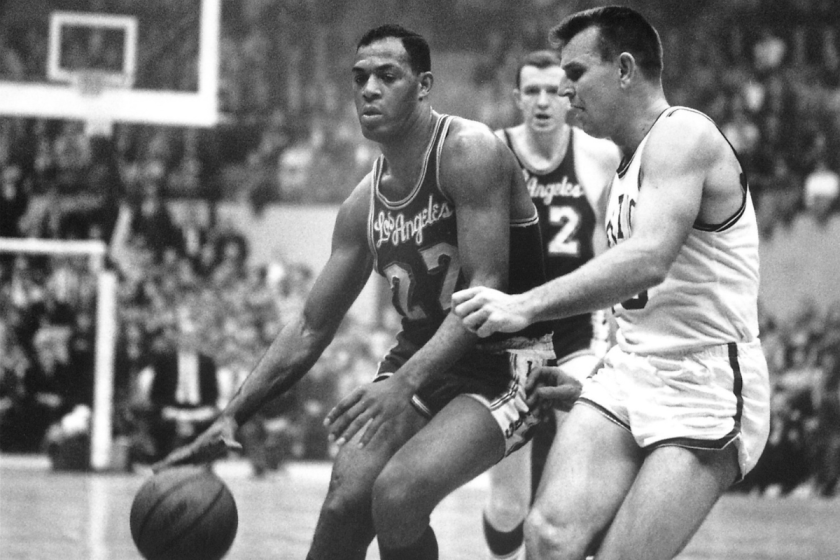 The NBA Finals are a gladiator match. Your championship hopes are on the line, and the only way to survive is to fight with everything you have. (Yes, I watched “Gladiator” recently and yes, I was entertained). So, with the stakes at their highest, what are you going to do? Shrink or rise to the occasion?

It was Game 5, a crucial game that often determines the outcome of the series, and Baylor’s Los Angeles Lakers were tied at two games apiece with the Boston Celtics. His team needed him. He answered the call by dropping 61 points without leaving the floor. Most importantly, the Lakers won the game in the hostile Boston Garden.

Baylor’s historic performance not only helped the Lakers win the game, but he also set the precedent for scoring frenzies in championship environments — a precedent that still stands today. Yes, Baylor’s 61-point outing is the most ever in a single game in NBA Finals history. More than Michael Jordan, more than Magic Johnson, more than Wilt Chamberlain, more than Kareem Abdul-Jabbar, more than Shaquille O?Neal, more than Kobe Bryant, more than LeBron James, more than Kevin Durant.

We have to take a moment to appreciate Elgin Baylor before diving into this specific performance. Baylor was basketball’s first acrobat. He was able to soar through the air in a time when most players played like they had lead in their shoes. His style of play was crucial to the evolution of the game.

Naturally, it helped him score a lot, too, because few defenders were capable of handling him. He averaged a ridiculous 27.4 points per game during his 14-year career, finishing with 23,149 total. Keep in mind, he played without a three-point line.

Anyway, when the Lakers and Celtics met in 1962 it was their second straight Finals meeting in what would be a total of six for the decade. Unfortunately for him, his Lakers were on the losing end of every single one of those matchups.

But, Baylor’s 61-point game is one of the greatest individual performances of the rivalry. He poured in 61 points on 22 of 46 shooting, including going 17 for 19 from the free-throw line, and snagged 22 rebounds while playing the entire game. He did it all while being defended by Tom “Satch” Sanders, a Celtics guard who’s regarded as one of the best defenders of the era, and Bill Russell in the paint, who’s one of the most dominant defensive players ever.

Watching the footage, It’s clear the Celtics had no idea what to do with Baylor even though they had played countless times. He could get to the rim at will and had a mid-range game that would make funny guy Kawhi Leonard crack a smile. It’s also evident Baylor’s style of play laid the foundation for Michael Jordan’s scoring game that would dominate the league 30 years in the future.

LA won the game 126-121, giving themselves a huge opportunity to close out the series at home. The basketball gods had a grudge against the Lakers that decade because Boston ended up winning Games 6 and 7 to capture their fourth-straight NBA championship. And not only did they lose the whole thing, but Baylor’s iconic Game 5 wasn’t even the best individual performance in the series. Bill Russell scored 30 points and grabbed 40 rebounds in Game 7 to help the Celtics win the title.

It’s still a mystery to this day what the Lakers did back then to piss off the basketball gods, but I would say things have worked out for them.

All that being said, the 11-time All-Star’s 61-point game is still the most points scored in an NBA Finals game 60 years later. As the only player to ever surpass the 60-point mark, It looks like it’ll keep its place in the record books for a long, long time.

The Top-10 Scoring Performances in an NBA Finals Game

1. Elgin Baylor, Los Angeles Lakers, 61 points against the Boston Celtics in Game 5 of the 1962 NBA Finals

T-2. Michael Jordan, Chicago Bulls, 55 points against the Phoenix Suns in Game 4 of the 1993 NBA Finals

4. Jerry West, Los Angeles Lakers, 53 points against the Boston Celtics in Game 1 of the 1969 NBA Finals

5. LeBron James, Cleveland Cavaliers, 51 points against the Golden State Warriors in Game 1 of the 2018 NBA Finals

T-6. Giannis Antetokounmpo, Milwaukee Bucks, 50 points against the Phoenix Suns in Game 6 of the 2021 NBA Finals

8. Allen Iverson, Philadelphia 76ers, 48 points against the Los Angeles Lakers in Game 1 of the 2001 NBA Finals

9. Stephen Curry, Golden State Warriors, 47 points against the Toronto Raptors in Game 3 of the 2019 NBA Finals

10. Michael Jordan, Chicago Bulls, 46 points against the Portland Trail Blazers in Game 5 of the 1992 NBA Finals