When Michael Jordan and the 1990s Chicago Bulls graced our television screens with "The Last Dance" on ESPN, we got an inside look at the hyper-competitive nature of Michael Jordan. The dude did whatever it took to win.

Russell wasn't traditionally the best scorer or most dynamic player, although he produced his fair share of buckets. He was the leader who steered his team to titles by protecting the rim and snatching rebounds.

And as the news of his passing sends shockwaves through the NBA and basketball communities, we wanted to return to one of Russell's all-time greatest performances. In Game 7 of the 1962 NBA Finals against the Los Angeles Lakers, Russell carried the Celtics to their fourth-straight championship and fifth in six years, behind 30 points and 40 rebounds. 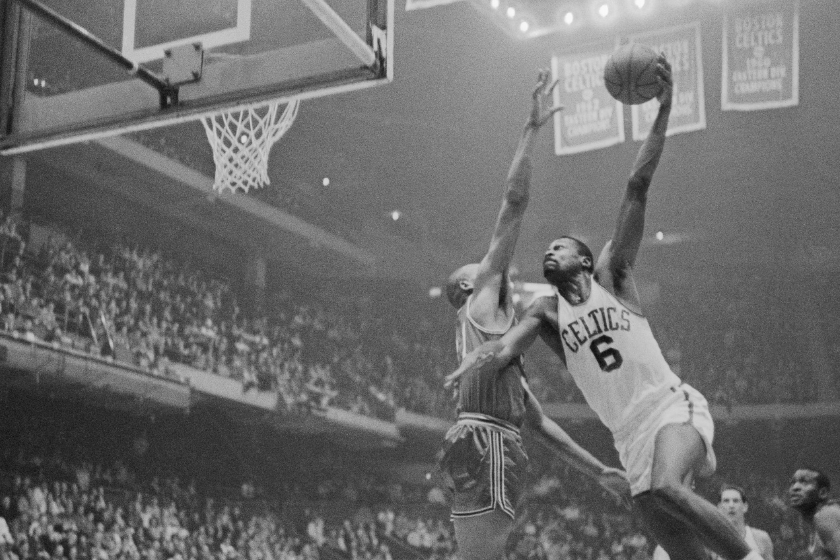 Photo by the Bettmann Collection via Getty Images

Any basketball fan will tell you that the road to the NBA championship is no cakewalk. During the time that Russell played, only six teams made the NBA playoffs and the one-seed earned a bye. The Red Auerbach-led Celtics -- the top seed in the East and fresh off a victory over the St. Louis Hawks for the 1961 title -- faced Wilt Chamberlain and the Philadelphia Warriors in the Eastern Conference Finals. The Warriors won their best-of-five, first-round series 3-2 over the Syracuse Nationals, who became the Philadelphia 76ers in 1963 after the Warriors moved to San Fransisco.

Rivals Russell and Chamberlain battled down low through a grueling seven-game series, but the Celtics narrowly escaped with a 109-107 victory in Game 7 to advance to their fifth NBA Finals in as many years. On the other side of the bracket, the top-seeded Lakers defeated the Detroit Pistons -- who took care of the Cincinnati Royals the previous round -- in six games to claim the West title. The storied franchises faced off for the first time since 1959 when the Lakers resided in Minneapolis.

Just a quick break in the action for a second. If you read those last two paragraphs and asked yourself if any of those team names were typos, we'd like to state that they are not. That's how much the league has changed its 75+ years of existence, but it also serves to highlight something else: how insane Bill Russell was on the basketball court.

Russell, Bob Cousy, Sam Jones, Tom Heinsohn, Frank Ramsey, Tom Sanders, and the Celtics versus Jerry West, Elgin Baylor, Frank Selvy, and the Lakers. NBA historians are geeking out just thinking about all these Hall of Famers. Imagine sitting in the stands and thinking you were just watching another NBA Finals, and not the foundation of an American sport.

Los Angeles and Boston alternated wins, except for a two-game streak by the Lakers in Games 2 and 3. The Celtics evened the series in game 6 and traveled back to the Boston Garden for the decisive Game 7.

This is where Russell shined.

The two teams traded punches while Russell grabbed every rebound in sight. Playing the entire game, including the five-minute overtime period, he hauled in 40 (!) boards, nearly half of the team's 82 total. For context on both of those numbers, the 2021-22 Boston Celtics average 43 total rebounds a game in their Playoff-run, meanwhile, Russell is out there tying his 1960 NBA Finals record for most rebounds in a single game. Offensively, he poured in 30 points, going 8-of-18 from the field and 14-of-17 from the free-throw line. The performance pushed the Celtics to a 110-107 victory and fourth consecutive NBA title.

Forget the spotlight and stats; Russell didn't need them. All he needed was the win. Whether that's scoring 5 points or 30, the five-time regular-season MVP and 12-time All-Star embraced the role best suited for his team's success. It's the reason the Finals MVP trophy is named after him. It's the reason he has 11 championships and is the greatest winner in NBA history.

Bill Russell's Legacy with the Celtics 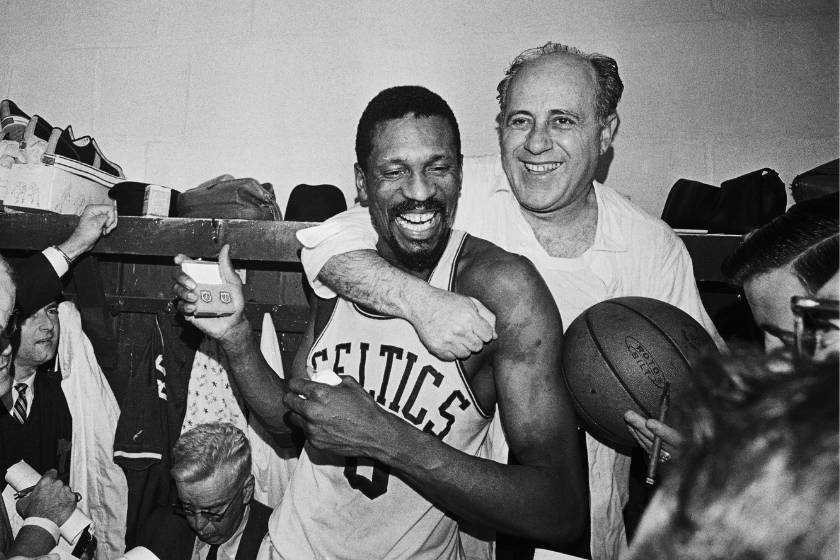 Photo from the Bettmann Collection via Getty Images.

And it's because of his ability to step up and battle for the city of Boston, that Bill Russell, who passed away on July 31, 2022, at the age of 88, has cemented himself as the greatest Celtic basketball play of all time. When you look back at all of the big moments this franchise has had during its long run, Bill Russell is always there, celebrating and driving this team forward. Even when he retired from the game, Russell was moving the game forward becoming the first black coach to sit on an NBA sideline when Red Auerbach brought him onto his team as an assistant.

"When I was appointed coach of the Boston Celtics, the players accepted me with no antagonism at all," Russell said years later. "They respected me as a player and my knowledge of the game and they played as hard for me as they used to play for Red Auerbach."

How could they not accept Bill with anything but respect? After all, their new coach left a lasting impact on the game that can be felt decades after he stepped off the hardwood and for many more as we all reflect on his legacy in the wake of his passing.