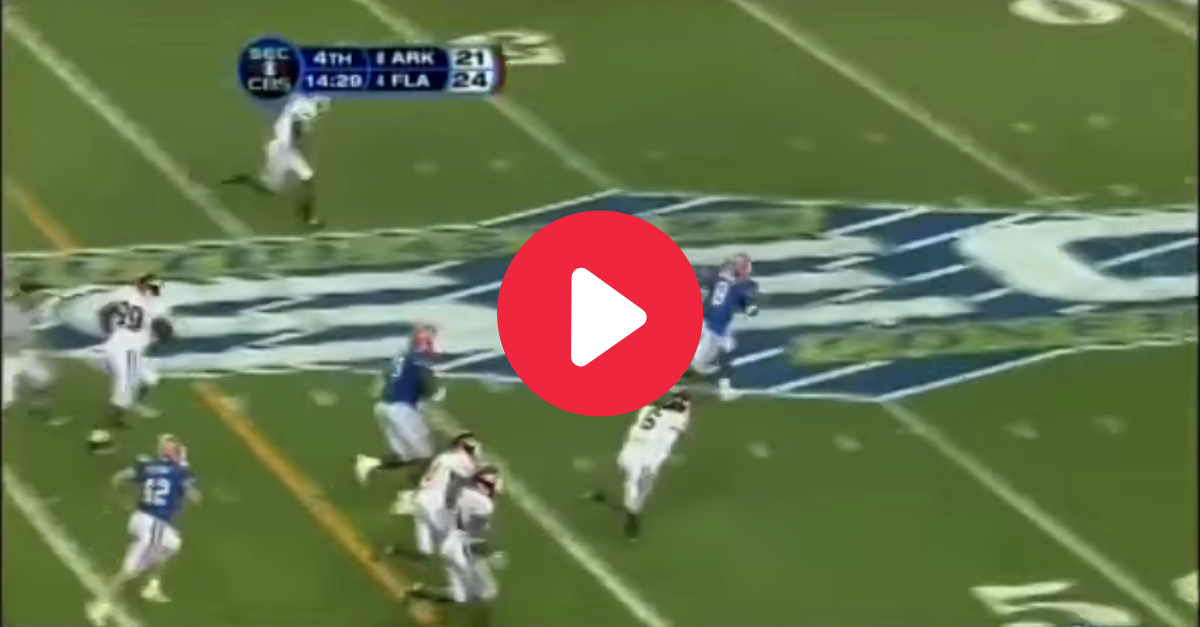 College football coaches only go as far as their recruiting abilities will take them. Nick Saban can be an expert in X’s and O’s all he wants but Alabama is nothing without his endless bag of five-star prospects to grab from. Sometimes, that means sending 105 letters to a recruit in a single day.

There may be no greater recruiter than THE Urban Meyer. Responsible for winning three of the last 14 NCAA football national championships — second only to Saban’s five –, Meyer made a name for himself in Gainesville at the University of Florida and Ohio State behind some of the most impressive recruiting classes this side of 2000 has ever seen.

In 2008 alone, Meyer’s arsenal consisted of the greatest college quarterback of all time, an NFL MVP quarterback, a deeply troubled NFL-caliber tight end with athletic gifts second to none, a defense littered with future NFL starters and a wide receiving corps led by the most dynamic receiver/running back hybrid in the Southeastern Conference.

Yet, without Percy Harvin, there’s no way Meyer wins the BCS Championship Game in 2006 or 2008.

There may be no better play that exemplifies Harvin’s explosive abilities in college than when he took a hand-off from Chris Leak in the fourth quarter of Florida’s bout with Arkansas in the 2006 SEC Championship game.

Florida led the game, 24-21, but the Razorbacks had all the momentum after a sloppy third quarter on UF’s side. The Gators needed a spark. Something to get the offense going and put the game away.

Meyer called a counter play, and it worked beautifully. Harvin took the hand-off from Leak and cut back to the side he came from. After making one Arkansas defender miss, he was gone. Nobody could catch prime Percy.

Florida went on to win the game, 38-28. They then dismantled Ohio State in the BCS Championship game. Harvin was only just getting started at Florida, though.

Lifelong Gator fans already know Harvin is one of the most underrated college players they’ve ever witnessed. If anything, he was one of the most exciting and exhilarating football players to ever don the orange and blue.

How else do you think ?Oh, Mercy, Percy!? first came about?

Here are some statistics to show just what I mean:

Harvin was a Swiss Army knife and Meyer broke out his weapon as often as possible.

That’s why he was the No. 2 overall recruit in the 2006 class coming out of Landstown High School in Virginia Beach, Virginia. It’s also why he shined in the 2006 Army Bowl alongside his future quarterback and another top recruit in UF’s second-ranked class. Harvin chose Florida over Florida State, Miami, Michigan and USC and joined Tim Tebow in what would become a magical three years.

And it was No. 1?s versatility (Harvin wore No. 8 as a freshman) that made him so dangerous.

Single coverage? Burned for a touchdown. Rush around the edge or counter? First down, maybe more. Kick return with good blocking? Forget about tripping him up.

Paired with Tebow, Harvin was basically a cheat code. The Gators often ran plays in which either Harvin took the carry or Tebow ? arguably the greatest running college quarterback of all time. Defenders were forced into choosing to attack a player they couldn?t tackle or one they couldn?t catch.

Harvin also ran some Wildcat packages featuring a bevy of blockers. As long as no one missed an assignment, he was off for the races.

Of course, Harvin had a pretty good supporting cast that helped him excel. The receiving corps in 2006 alone featured more than a handful of NFL players ? Andre Caldwell, Dallas Baker, Riley Cooper, David Nelson, Louis Murphy and Harvin. That meant quarterback Chris Leak had an endless amount of options to throw to.

It also helped that Meyer, along with a coaching staff that included current Gators coach Dan Mullen, were creative as hell with all those weapons. Mullen, by the way, told Sports Illustrated he still considers Harvin “the greatest college player I’ve ever seen.”

Harvin was almost immediately the focal point of the offense as a true freshman. In his second game against the UCF Knights, he scored his first ever collegiate touchdown — a 58-yard touchdown reception. He scored in each of the team’s final three games, including in the BCS National Championship game against Ohio State. By season’s end, his 855 yards from scrimmage — 427 receiving, 428 rushing — were second to only Dallas Baker’s 920 yards.

By his junior season, he was a First Team All-American. The speedster scored 17 touchdowns. He found the end zone in every single game. In fact, he scored in 15 straight games dating back to the 2007 season.

That’s how dynamic he was. Even if he only touched the ball a few times a game, he was a threat to take it to the house. In 2008, against Kentucky, he touched it just three times. He scored twice and put up 55 yards.

Following his legendary career with the Florida Gators, Harvin was selected in the first round (22nd overall) of the 2009 NFL Draft by the Minnesota Vikings. Sporting News named him the 2009 NFL Rookie of the Year and he became known as a prominent receiver and special teams threat. He posted his best season in 2011, when he was active for all 16 games for the first time and tallied 967 receiving yards, 325 rushing yards and nine total touchdowns.

In 2013, the Vikings traded Harvin to the Seattle Seahawks for three draft picks. The team immediately signed him to a massive six-year, $67 million contract. Injuries and concussions derailed the rest of his NFL career — including with the New York Jets and Buffalo Bills — but he did return a kickoff for a Seahawks touchdown to begin the second half of Super Bowl XLVIII against the Denver Broncos.

Controversy followed him during his college and pro career. He was accused of choking UF wide receivers coach Billy Gonzales once, though both have said the incident was overblown. He got into spats with coaches on the sidelines as a member of the Vikings. He reportedly got into altercations with Seahawks receivers Golden Tate and Doug Baldwin.

Percy Harvin was one of the most electric players on two Florida national championship teams.

Now, he's back in Gainesville and working with the Gators as a mentor: https://t.co/DC6RZOfXEf pic.twitter.com/ZCstzuU8xk

Just 31 years old, Harvin now lives in the same Gainesville subdivision as Mullen. He moved from Orlando to be closer to his son, Jaden, who he has shared custody over. He drops by UF practices infuse some wisdom from time to time. A return to the NFL is the last thing on his mind.

Florida Gators wide receiver Percy Harvin’s legacy will always be one that begins in The Swamp. Without the lightning fast superstar, Urban Meyer maybe never cements himself as one of the NCAA’s elite coaches. Even he probably knows that.

“I think Percy Harvin is as good an athlete that?s played football. Ever,” Meyer told The Fighter and The Kid podcast.

“You?re saying ?well coach that?s a long time? and I know it is and I?m not being disrespectful to some of these phenomenal players that have ever played, but I?ve seen what he does in the Southeastern Conference and I don?t want to say ?toyed? with people but he was that electric.”