Whoever built the foundation for the Christmas tree on the "Inside the NBA" set should be in charge of this country's infrastructure.

Sorry, Pete Buttigieg, but until you grow a Christmas tree that can withstand a 7-foot-1, 350-pound man stumbling into it on his way to break down pick-and-rolls, we're going to have to revisit your qualifications.

Tuesday night, Shaquille O'Neal and Kenny Smith were racing to the big board when "The Jet" pushed Shaq off balance. O'Neal proceeded to fall like a ton of bricks into the gigantic tree, but -- by some divine intervention -- it stood its ground despite one of the largest humans on Earth hurtling into it.

Kenny Pushes Shaq Into Christmas Tree on "Inside the NBA"

RELATED: The 10 Best "Inside the NBA" Moments From This Season, Ranked By Hilarity

The sequence starts off with Kenny doing his best "Last one to the car is a rotten egg" bit. He's the kid who proclaims there's a race while already in motion of said race.

Anyway, Kenny takes off with Shaq a few steps behind him. Shaq, with a stride length that I'm sure doubles Kenny's, catches up quickly. Kenny, however, uses the set decorations to his advantage. He sees Shaq could use his huge frame to rumble by and beat him to the board. So Kenny beats Shaq to the spot as if he's setting up to take a charge and bodies him into the Christmas tree. He scoots his way to the board. Victory is his.

Meanwhile, Shaq is lying on top of some presents at the base of the tree as if he was just murdered. 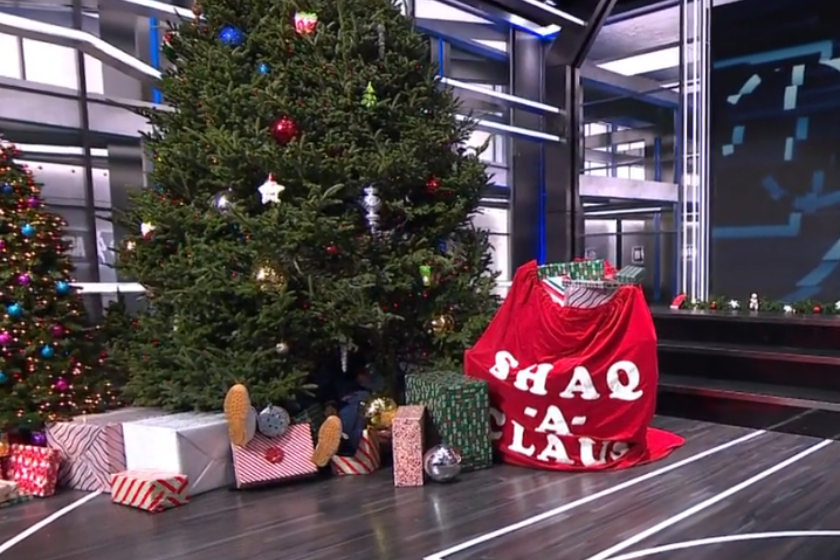 Kenny basks in the moment at the big board while Shaq remains motionless. In what can only be described as a Christmas miracle, Ernie Johnson and Charles Barkley go over and bring Shaq back to life.

The crew returns to the desk with Shaq covered in bristles and pieces of ornaments.

If this sequence was familiar, it's because the two did the exact same thing in 2014. That tree wasn't so lucky.

Shenanigans like this are what make "Inside the NBA" the best sports show on TV. I implore all Christmas trees on set to proceed with caution.