Steve Nash is going to sleep like a baby tonight.

ESPN's Adrian Wojnarowski reported the Nets fired Nash earlier Tuesday afternoon, though the decision was a mutual parting of ways. The writing was on the wall when Kevin Durant urged team governor Joe Tsai to fire Nash and general manager Sean Marks in the midst of a trade request this summer -- a hilarious ending considering Nash was Durant and Kyrie Irving's hand-picked choice.

Like most cases with a disgruntled team, though, the head coach is the scapegoat and, naturally, the first to go. But this decision won't change a thing.

Brooklyn's Problems Are Rooted Much Deeper Than Nash 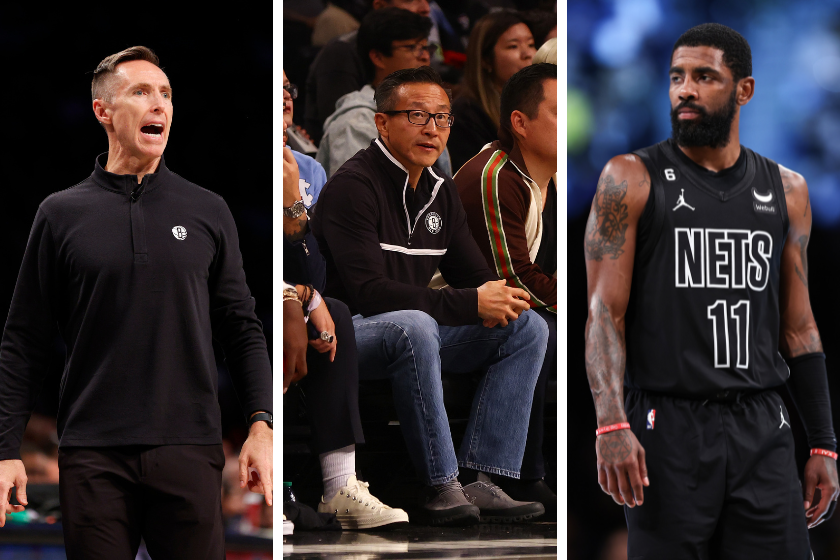 Let's start with the actual basketball. The Nets are abysmal on defense, posting the second-worst defensive rating in the NBA ahead of only the Memphis Grizzlies. There's no one to protect the rim, and the guy who would be perfect holding down the paint (Jarrett Allen) was dealt as part of the package to acquire James Harden. Their offense, which should be juggernaut-like in theory, ranks in the middle of the pack. Durant is balling, but behind the core of him, Irving, Ben Simmons, Joe Harris and Seth Curry, they're paper thin. Speaking of Simmons, the former No. 1 overall draft pick is terrified of shooting and is still finding the form of the lockdown defensive player he once was.

Off the court, the problems begin and end with Irving. The point guard has refused vaccines, subscribed to every theory he comes across from the depths of the internet and despicably spread antisemitism. Irving saying the Earth is flat was a cute side story in retrospect, but he's progressed into the pseudo-intellectual kid in your college philosophy class who refuses to have a dialogue about an opinion other than his and plays the victim. Some have called for him to be suspended, some for him to be waived, but the Nets have yet to take action other than Tsai sending out a few tweets and internal conversations. Well-run franchises take swift action.

Meanwhile, Nash -- a first-time head coach -- was supposed to coach basketball in the midst of all this.

If I were the Nets, I would blow it up immediately. Trade Durant for draft picks, get rid of Irving yesterday and salvage the season for what you can. Forget title contention; it ain't happening. Nash should only be the first step.

But what is Brooklyn going to do? Reports indicate former Boston Celtics head coach Ime Udoka, who was suspended indefinitely for his romantic involvement with a Celtics female staff member before the season started, is likely to be named head coach. Upstanding stuff.

Tony Soprano said that "remember when" is the lowest form of conversation -- but I'm sorry, T, I'm gonna have to stoop low. Remember when the Nets were the darlings of the league and had a frisky team make the playoffs in 2019? Remember when the Nets traded for Harden and appeared to be unbeatable? (By the way, Harden looks like a genius now for forcing his way out.)

There's an alternate timeline where Harden didn't hurt his hamstring and Durant didn't toe the 3-point line in Game 7 of the 2021 Eastern Conference Semifinals against the Milwaukee Bucks, and Brooklyn lived happily ever after. Alas, the Nets have become the armpit of the NBA.

MORE: Russell Westbrook Trades That Could Benefit Both Teams in the Deal