The Brooklyn Nets have stayed under the radar over the past season. They traded for and traded away James Harden in a span of 13 months. Their biggest star, Kevin Durant, asked for a trade, only to reconcile with the front office. Kyrie Irving ... did Kyrie Irving things. Ben Simmons allegedly left the team group chat after being begged to suit up for a do-or-die playoff game and most recently missed a shot so bad it ended up in Hoboken.

Yup, it's smooth sailing in Brooklyn, and the man steering the ship is head coach Steve Nash.

In NBA terms, "smooth sailing" is interchangeable with "ticking time bomb." With tension at the Barclays Center nearly at a boiling point, Nash has no margin for error entering his third season.

Steve Nash is a Lame Duck 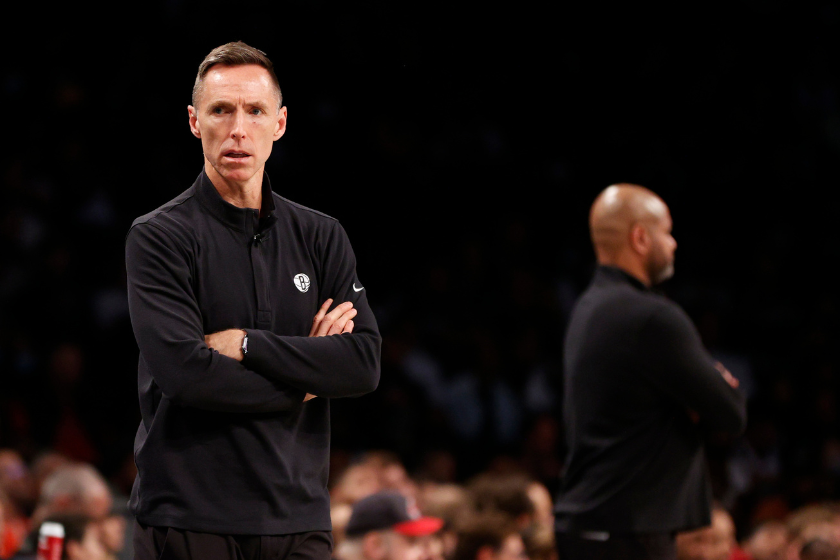 RELATED: The Only Person on the Brooklyn Nets With Something to Prove is Steve Nash

The Nets looked to be the NBA's next juggernaut when Nash was hired in September 2020. KD was returning from a yearlong absence, and we would finally see him take the court with Irving. We expected pure, high-flying basketball from those two under Nash -- a two-time MVP, eight-time All-Star, seven-time All-NBA selection and Hall of Fame point guard -- whom the duo chose after ousting Kenny Atkinson.

But barely a month after Nash landed the job, Kyrie undermined his authority on Durant's podcast "The ETCs."

So, in an attempt to that signal the Nets were operating as a collaborative effort, he did the opposite by speaking Nash's figurehead role into existence.

Looking back now, Nash was destined to fail from the start. He had no coaching experience and was tasked with handling two of the most emotional guys in the NBA. That's just the tip of the iceberg, too. Add in the Harden saga, Kyrie's vaccination stance, another off-court anomaly in Simmons, sophomore guard Cam Thomas dismissing Nash's advice at the NBA Summer League and KD urging Nets governor Joe Tsai to fire Nash and general manager Sean Marks this past offseason. Are we surprised the Nets have only won one playoff series during Nash's tenure?

Reporter: "I was talking to your coach Steve Nash & he's encouraging you to look for your shot & your teammates"

Cam Thomas rolls eyes "It is what it is"

Nash's predicament reminds me of Frank Vogel's situation with the Los Angeles Lakers last year. Vogel's reinvigorated defense helped the Lakers capture the 2020 NBA title. Then, two seasons later, he had to handle Russell Westbrook and a wildly dysfunctional locker room and got fired. Was it entirely his fault? No, but head coaches are more expendable than stars. The same result is inevitable for Nash.

Like Vogel, Nash isn't entirely responsible either. The fault falls on Tsai. He bent to the wills of Durant and Irving when they arrived in 2019 by parting ways with Atkinson, who consistently showed improvement and had just led a frisky team to the postseason. The irony on top is that Durant and Irving hand-picked Nash.

When a player's frustrations about a head coach become public, such as Durant's and Thomas', it's never a good sign. Sure, on paper, Nash has as talented a team as anyone, but he was thrown into the lion's den. A seasoned NBA coach would've had a tough time in Brooklyn, let alone a first-timer. Are we really surprised with how things turned out in hindsight?

Brooklyn will look to get rid of Nash the first opportunity it can -- it's only a matter of when. I don't believe it will make much of a difference in a loaded Eastern Conference headlined by the Boston Celtics, Milwaukee Bucks and Philadelphia 76ers.