In early March of 2022, news of WNBA superstar Brittney Griner being detained in Russia surfaced. The reason for her arrest was that Russian Federal Customs Service officials discovered vape cartridges containing oil derived from cannabis. In Russia, this offense is punishable by up to 10 years in prison. At the time of the writing of this article, Griner is still being detained in Russia. Griner was in Russia to play for UMMC, a Russian women's basketball team, during the WNBA off-season.

Brittney Griner's career in the WNBA is not something to scoff at. She was drafted by the Phoenix Mercury in 2013 as the No. 1 overall pick. At 6-foot-9, she's one of the tallest women to ever play the sport and proved herself to be a dominant powerhouse from the start of her career. In 2014, just her second season in the league, Griner set the WNBA record for most blocks in a regular-season game (11). This was the same year the Phoenix Mercury won the franchise's third championship. She is also a two-time gold medalist, representing the U.S. women's basketball team in the 2016 and 2021 Olympics. She has made seven All-Star appearances and is regarded as one of the great talents of the WNBA.

My point? Griner isn't some player coming off the bench and playing limited minutes at the end of a blowout game. She's an absolute superstar. When we see NBA players playing overseas in Europe, it's usually because they were unable to get signed with the league in the states; or, of course, during the Olympics.

We don't see LeBron James spending his off-season brushing up his game in China. We see soccer stars like Christian Pulisic head to England's Premier League instead of the MLS, but that's due to better pay and a larger spotlight. So, the question is, why is Brittney Griner playing in Russia or during the offseason? Why isn't she enjoying her time off on some warm, sandy beach somewhere? Why isn't she relaxing with loved ones? Why does she need to play overseas?

The answer is simple: money.

Why Do So Many WNBA Players Play in Europe? 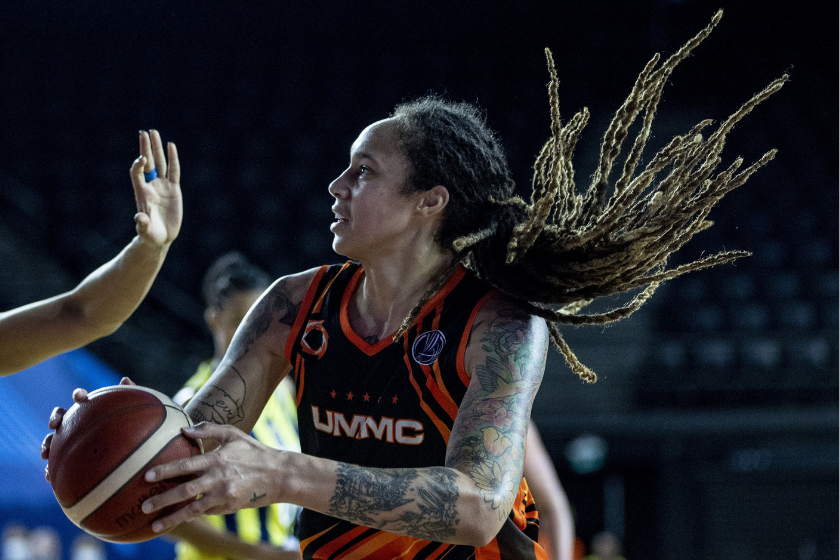 Griner's base salary this past season was just over $220,000. This is, of course, more than a decent salary for the general public. But for a world-class athlete, who is one of the best in the league? It's nothing. The pay discrepancy between the NBA and the WNBA is honestly shocking.

To put things into perspective, let's look at Rudy Gobert of the Utah Jazz. He and Griner have been in their respective leagues for about the same length of time, they're both dominant centers, they both have multiple all-star appearances (Gobert has three while Griner has seven) and they're both stars in their own right. According to Spotrac, Gobert's base salary for the 2021-22 NBA season is $35,344,828. That's $431,034 per regular-season game. Griner's salary for the 2021-22 season was $221,450 as one of the WNBA's highest-paid players. Rudy Gobert makes more money in a single game than Brittney Griner makes in an entire year as a WNBA superstar, who makes over $1 million playing in Russia.

Think of it this way: Griner's $1 million is four times the WNBA salary of the three highest-paid players. Women's basketball is just much more lucrative overseas than it is in the United States.

The sad reality is that nearly half of WNBA players spend their offseasons playing overseas to supplement their WNBA salaries. One of these players is WNBA star Diana Taurasi, Griner's teammate. In fact, Taurasi actually chose to sit out the 2015 WNBA season because UMMC Ekaterinburg reportedly offered her $1.5 million to rest.

Taurasi began playing internationally in 2005, early in her professional career and began playing for UMMC in 2012 (where Candace Parker and Sue Bird were also playing at the time). Like Taurasi, Griner began playing internationally early in her professional career, starting in China in the 2013-14 off-season where she played for the Zhejiang Golden Bulls. That contract came after her rookie year in the WNBA and earned her $600,000 in just four months. Her salary for her rookie year in the WNBA was $49,440. That's about how much I made in a year working as an assistant manager at a bar/restaurant. I worked hard, but in no world should I have been making more money than a world-class professional athlete, rookie or not.

Some players like WNBA legend Becky Hammon actually attained dual citizenship to make her time playing in Russia easier and to allow her to play on the Russian National Team, and make more money.

The WNBA Needs to Be More Vocal in Supporting Players 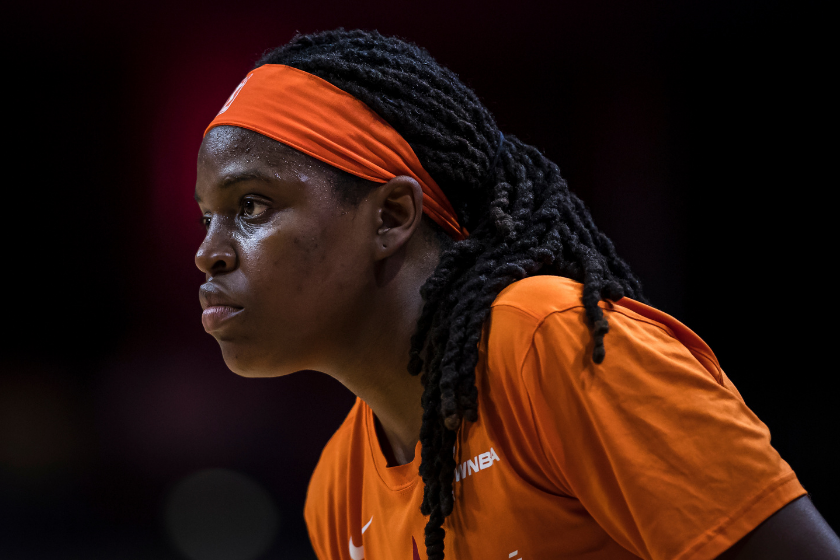 Related: Sue Bird's Net Worth: How The WNBA & Olympic Icon Made Millions

The wrongful detention of Griner in Russia is shining a light on just how undervalued women are in professional sports. The WNBA's statement regarding the event was simply: "Brittney Griner has the WNBA's full support and our main priority is her swift and safe return to the United States."

The WNBA is a wonderful league in many ways -- especially the way in which players use their platforms to speak out about social injustice. That being said, it seems like the league is keeping rather quiet about this entire situation because, perhaps, they realize that they are largely to blame. The fact that even the biggest stars in the WNBA like Seattle's Breanna Stewart, Dallas Wings star Arike Ogunbowale and Chicago Sky's on-court leader Courtney Vandersloot and Allie Quigley are so underpaid that they choose to play in countries like Russia and Turkey to supplement their salaries is appalling.

In February of 2022, Jonquel Jones of the Connecticut Sun, tweeted: "It's all a popularity contest and politics in wbb. In mbb you just gottah be the best. In wbb you gottah be the best player, best looking, most marketable, most IG followers, just to sit at the endorsement table. Thank God for overseas because my bag would've been fumbled." That tweet was followed by, "I'm glad they pay me what I'm worth and see the value in me simply being one of the best at my craft."

Jones, Taurasi, Griner and so many other powerhouse talents in the WNBA make the majority of their money playing basketball overseas. If I had to guess, I would say that the players would much rather stay in the United States and be paid fairly than spend their summers playing overseas in the Euroleagues.

Consider this: Washington Mystics player Elizabeth Williams has played professional basketball since 2015, when she was drafted out of Duke. Over her career, Williams has played for seven teams in four leagues. That's a lot of maneuvering just to make ends meet.

What Would It Take For a WNBA Player to be Paid What They Are Worth? 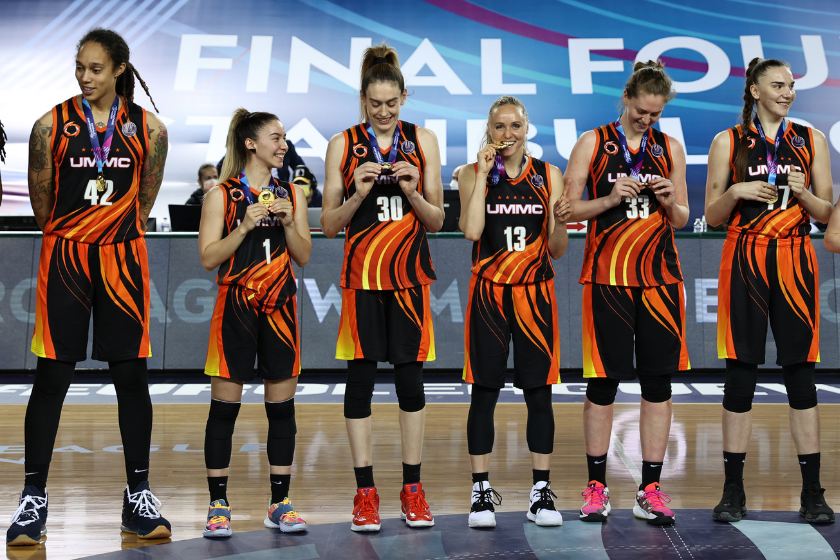 Related: How Much Do WNBA Players Really Make?

The money has to come from somewhere. As most people know, the NBA far outperforms the WNBA as far as revenue goes.

According to a 2019 WSN article, the NBA generates about $7.4 billion in revenue, while the WNBA generates just about $60 million. The average ticket price for an NBA game is $89 in comparison to the WNBA's $17.42.

In addition, the WNBA's viewership pales in comparison the that of the NBA. Not only does the WNBA generate a small fraction of the revenue the NBA generates, but the revenue share percentage in the WNBA has historically been much lower for the players than what the NBA's players receive. If the WNBA's ticket prices go up, essentially passing the financial burden of the players' salary increase onto the league's fans, attendance will drop. If the WNBA pushes for more marketing in order to increase attendance/ticket sales, well, that costs money too.

In my opinion, part of the solution lies with the franchise owners. According to a quick Google search, Robert Sarver (who retired amid an NBA investigation over his racist and misogynistic behavior), the owner of the Phoenix Mercury, has a net worth of about $800 million. He purchased the team along with the Phoenix Suns in 2004. Now, $800 million is a lot of money -- it's a lot of money even if that number is off by several hundred million dollars. The owners and the league should focus their efforts on better marketing to increase revenue. In addition to spending their money on better marketing, franchise owners could spend some of their own money to increase the salaries of their players. Although the WNBA doesn't generate nearly the amount of money that the NBA does, their players deserve financial security and they deserve to be safe. And while it is a good sign that players like New York Liberty's Sabrina Ionescu and the Las Vegas Aces star and 2020 league MVP A'ja Wilson have yet to head overseas, there's more that needs to be done.

I hope that Brittney Griner's arrest in Moscow and detainment by the Russian government brings attention to the major pay inequity in the WNBA. There is absolutely no reason that one of the United States' best and brightest athletes should be used as leverage in a Russian prison during the country's invasion of Ukraine, simply because the league cannot find a way to pay her what she's worth. Something has got to change.

MORE: Reggie Miller's Sister Was Better Than He Ever Was