NFL quarterbacks are used to someone of New Orleans Pelicans superstar Zion Williamson's stature gunning for their heads. On the basketball court, the first overall pick in the 2019 NBA Draft is more of an anomaly.

In addition to being one the burliest players, Williamson is the most athletic.

What Is Zion Williamson's Weight? 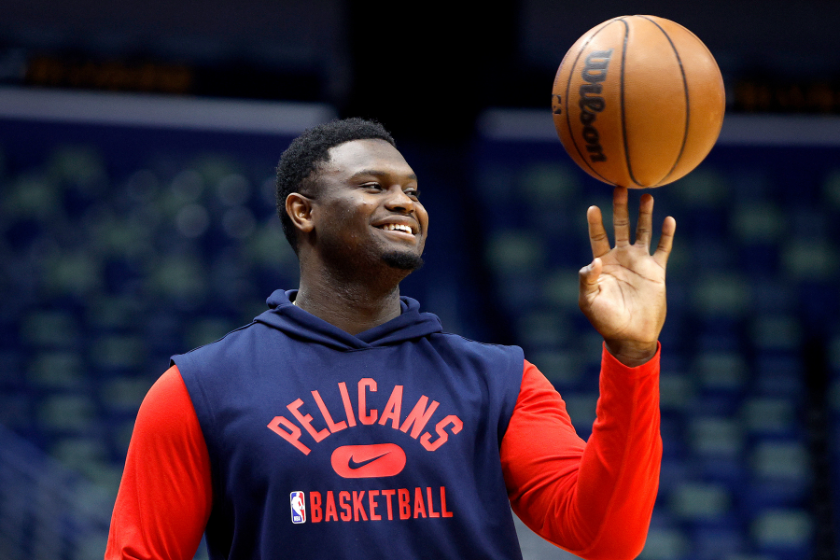 RELATED: How Does Zion Williamson's Vertical Compare to Past NBA Stars?

Zion's officially listed at 6-foot-6 and 284 pounds. That makes him the fourth heaviest player in the league behind 7-foot-5, 311-pound free agent Tacko Fall, 7-foot-4, 290-pound Boban Marjanovic of the Houston Rockets and 6-foot-11, 290-pound Jusuf Nurkic of the Portland Trail Blazers. The only people in the league heavier than Zion have at least 5 inches on him!

The weight issue is a double-edged sword. On one end, it's a huge part of his game. He can move essentially anyone and bully them on his way to the hoop. On the other, it has affected his stamina and made him more prone to injuries. He missed the final six regular-season games in his one year at Duke due to a knee sprain and tore his meniscus in the 2019-20 NBA preseason, causing a 44-game absence. He missed all of the 2021-22 season due to a right foot injury, too. Entering his fourth season, Williamson has only played 85 games.

Still, Zion has proven he's one of the most unstoppable players in the league when healthy. The Pelicans showed their commitment to their star by awarding him a five-year, $193 million max contract extension this offseason. The deal could net him as much as $231 million if he meets certain escalators. However, there's a catch. Christian Clark of Nola.com reported Williamson will have periodic weigh ins throughout the entirety of the deal. If his weight and body fat percentage aren't below a combined 295, the amount of guaranteed money will be reduced.

Zion is all about securing that $200 million, though, because he showed up to NBA Media Days looking fitter than ever. The Internet was quick to take notice.

Zion is in the building and he looks...? I won't say it @PelicanScoop pic.twitter.com/IRxyBDwXgK

This is bad news for everyone else in the NBA. Williamson has dominated in the games he's played by averaging 25.7 points on 60.4% shooting, 7 rebounds and 3.2 assists, and he's already dominating in team scrimmages according to Pelicans head coach Willie Green.

New Orleans showed promise in last year's NBA Playoffs. Now that Zion's healthy, prepare for the Pelicans to make some noise in the West.

MORE: The 12 Tallest NBA Players in History Don't Just Block Shots, They Block Out the Sun