It Started at QB, Now a 49ers Cheerleader Kneeled During the National Anthem 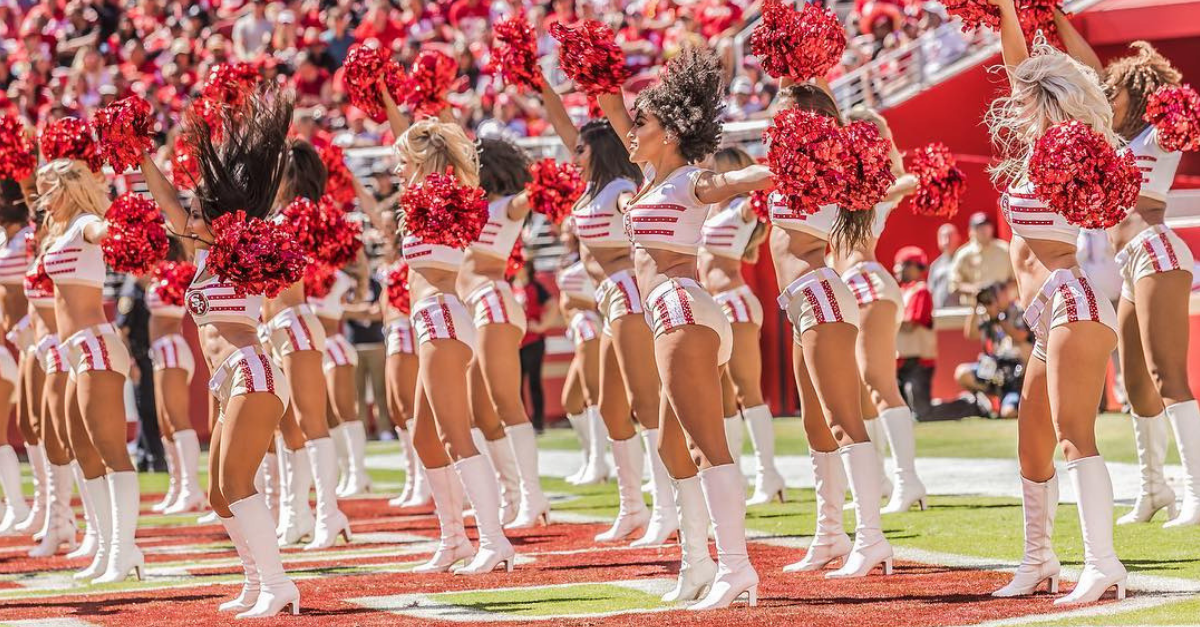 The epicenter of the now widespread national anthem protests is San Francisco, California. Back in 2016, San Francisco 49ers quarterback Colin Kaepernick started sitting on the bench during the anthem, then former Green Beret Nate Boyer advised Kaepernick that it would be more appropriate to kneel instead. You know the story from there, as national backlash, advertising campaigns and punishment suggestions from President Donald Trump followed.

On Thursday Night Football, the mostly uninspiring game between the 49ers and Oakland Raiders had one more storyline tacked onto it. Prior to the game, a currently unidentified 49ers cheerleader knelt in the endzone, pom-poms at her waist, while the rest of the Gold Rush cheerleaders stood during the playing of the Star Spangled Banner.

The NFL cheerleader, whose identity has yet to circulate, was the only member of the cheerleader squad who knelt prior to the game at Levi’s Stadium.

As you can imagine, a mixed bag of reactions poured into social media following her stunt.

@49ers why do you employ a cheerleader that disrespects the flag. She should be fired immediately @nflcommish @realDonaldTrump #NFL #49ersvRaiders pic.twitter.com/MtNb32z3rt

@NFL @49ers Now cheerleaders are kneeling. Was at the point I was gonna start watching after the last three years. This just sealed it. Will NEVER again watch a league that disrespects our flag, country, and the men and women that serve us all. #nfl #done

The 49ers cheerleader that kneeled during the anthem… that takes courage, good on her.

She’s likely lost her job over it but what an incredible statement to make. If they fire her, it becomes an even bigger statement.

The league pulled back on punishing NFL players for protesting earlier this season, after originally offering the ultimatum that players must stay in the locker room and avoid protesting on the field. That hasn’t stopped two Miami Dolphins wide receivers, or Carolina Panthers safety Eric Reid, who was the first 49ers player to protest racial inequality and police brutality alongside Kaepernick, to continue their demonstrations in 2018.

While this is the first NFL cheerleader to get noticed for her protest, cheerleaders for professional football teams typically have not been involved in the past. In a 2017 report by ELLE, many cheerleaders contacted for a story about why they don’t protest simply refused to respond. It’s a culture that, according to San Francisco-based lawyer Drexel Bradshaw, it’s simply dangerous for a cheerleader to be more than just that.

“There is a huge intimidation factor that these women experience. These are women who have trained for more than a decade, sometimes longer. They get this role and they won’t even call them women, they call them girls. And they constantly tell them how replaceable they are and a million people want their job. They denigrate them and make them feel worthless, and then they tell them to tell everyone that it’s great.” — Drexel Bradshaw, via ELLE

The NFL game itself left a lot to be desired pitting two one-win teams against each other, but the 49ers embarrassed Jon Gruden’s Raiders, winning the game 34-3 on the arm of third-string quarterback Nick Mullens, who put up 262 passing yards and three TDs in his NFL debut.

Mullens, an undrafted free agent from 2017, played college football for Southern Mississippi Golden Eagles. That’s the same school as NFL Hall of Famer Brett Favre. I’ll let you speculate if that means Mullens is the future of the NFL or not.

Results aside, this won’t be the last time we hear about the fate of this unidentified cheerleader in Santa Clara. To be sure, national anthem protests are alive and well no matter where you look.