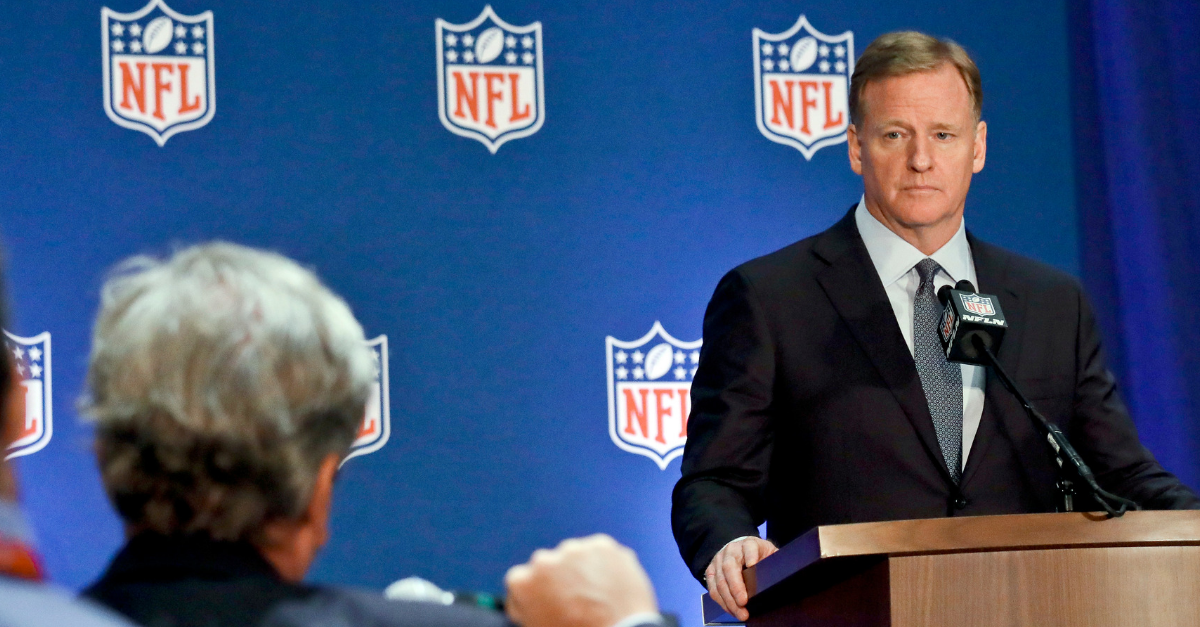 When San Francisco 49ers quarterback Colin Kaepernick first sat on the bench during the national anthem during the 2016 preseason, which later developed into the iconic kneeling protest, negative media surrounding the league crescendoed into a full-blown anti-NFL movement. With fans and support turning away from the league, the NFL decided to enact an anthem policy forcing players wishing to demonstrate to stay in their locker rooms during pregame ceremonies, or teams could punish players who protested anyway.

For as much drama as the NFL’s policy stirred up during the offseason, it appears that after everything, the league is kneeling down themselves and letting the clock expire on this topic. After the owner’s fall meetings concluded, they have decided there will not be any further policy put into effect to punish protesting players.

At the end of the NFL Owners’ Meetings in New York on Wednesday, ownership from all 32 teams left their round of fall meetings without a resolution that fell in line with their previous decision. Owners revisited the policy that was originally tabled back in July, but decided to double down on the upward, positive trend in TV ratings and popularity that the NFL is seeing through the first few weeks of the season.

“I think right now we are going forward just as we entered the season,” Dallas Cowboys owner Jerry Jones said after the meetings concluded.  “One of the owners stood up and said, ‘We have really gotten in a place that?s positive and ? not that we weren?t [in a positive place before] ? but we benefited from this.’ And I agree in relationships and sorting through where we want to go, and I?m so impressed with the social programs that the clubs and the players have engaged in.”

Jones’ “Stand During the Anthem, Toe the Line” statement is nothing more than an opinion now, albeit something that the longtime owner and general manager of the Cowboys surely still believes his team should abide by.

While no topic drew as much attention as the NFL’s anthem policy, other topics discussed were the potential sale of the Seattle Seahawks, a realignment in the NFL’s compensation committee, and serious concerns about the long-term plan for the Chargers remaining in Los Angeles.

The league’s often criticized NFL commissioner Roger Goodell spoke about where the league is heading, highlighting the social work that players are engaging in.

“I have been on ‘Listen and Learn’ tours with players, owners have been on Listen and Learns. The players are out there as well, and we can see the tremendous work that they are doing. We have reported over the last two days on the tremendous work that is being done in that area. Most importantly, we talked about the impact that our clubs and players are having working to address these issues. That is where our focus is right now, as it should be.” — Roger Goodell, via Yahoo! Sports

Goodell added, “I will leave you with something that I have said to the owners many times. I don?t think there has been a better time to be an NFL fan.”

The path is now clear for social justice warriors like Carolina Panthers safety Eric Reid and Miami Dolphins wide receivers Albert Wilson and Kenny Stills to continue their protests on Sundays without repercussions from the league.

Now that NFL owners have lifted their veil and shown that they’re going to work alongside players to combat the social issues of police brutality, systemic inequality and racial injustices against minorities, only time will tell if more NFL players now resume demonstrations on Sundays during the playing of our national anthem.