Every NFL Season there are major offseason shake-ups. Either during the NFL Draft or during free agency, some star players are going to be on the move. In some cases, like when Tom Brady left the New England Patriots for the warmer climate of Tampa Bay, the Buccaneers' future seemed clear: Super Bowl win.

Other moves, like Le'Veon Bell joining the New York Jets after a long drawn-out free agency, crashed and burned.

So what should we expect from this year's stars who were on the move this offseason? Good question. Let's dive in. 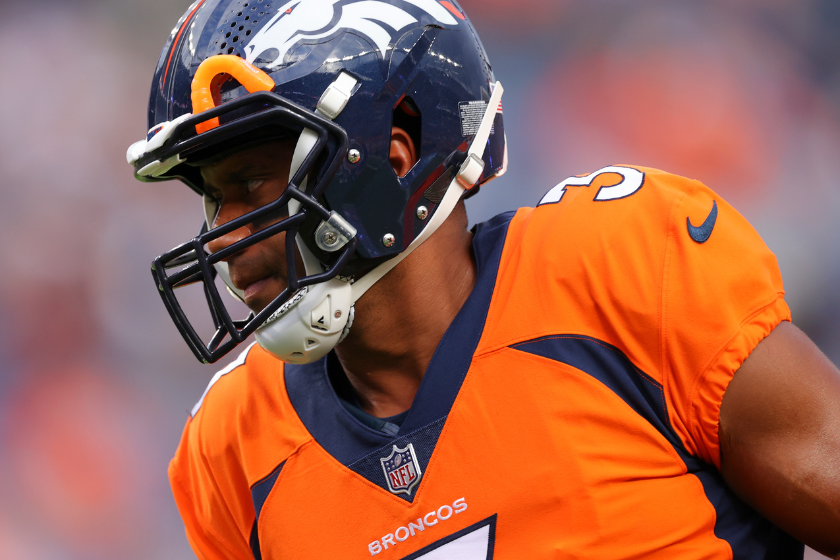 While Russell Wilson is arguably one of the corniest players in the NFL, his skill can't be undermined. Wilson is a true gunslinger, and the memories he made for Seahawks fans will be there for a lifetime.

Now, is he still the same quarterback he was? As long as he returns from his most recent injury, yes. However, with a new environment and a coach that will allow Russ to cook more, Wilson in Denver could bring back the Russ many came to know and love in the Pacific Northwest. Last season was the first season in Wilson's career that netted a non-winning record, so the change of scenery might've been what Russ needed to return to Mr. Unlimited. The only other time he didn't hit double-digit wins was in 2017, and even then Seattle was still a respectable 9-7.

Another wild Russell Wilson stat is the fact that last season was the first time Wilson missed a start since being drafted in 2012. Last year, Russ suffered a tendon rupture to a finger in his throwing hand. So, there's reason to understand why Wilson and the Seahawks didn't find much success last season. Between the injury and Russ potentially coming back too soon, it made for some lack-luster results from Mr. Unlimited.

Now, with a seemingly better offensive line, a similar/slightly worse receiving core, and a much better defense, Russell Wilson and the Denver Broncos could make a major splash in the AFC West. That said, the AFC West is the clear leader in terms of which division is going to be the toughest, so this will be a true test for Russ and the Broncos. 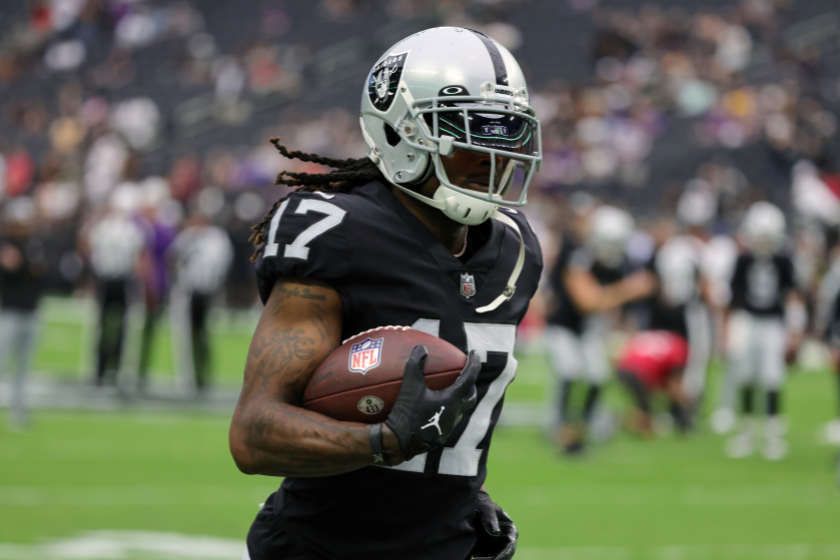 While Davante Adams is moving on from one of the most talented quarterbacks in the NFL in Aaron Rodgers, his situation isn't that much different than it was. Sure, anytime a player goes from a sure-fire Hall of Fame quarterback, their next quarterback likely won't be an upgrade; and that can be said about Derek Carr. However, with Adams and Carr having chemistry from their college days together at Fresno State, there won't be as much time needed for getting to know one another.

Davante Adams is oftentimes in the conversation for best receiver in the NFL, and while some of that relies on the quarterback throwing to you, Adams is a magician of a route-runner. Being a proficient route-runner makes the quarterback's job much easier, so Carr and Adams should have no issues recreating the magic Adams and Rodgers created in Green Bay. And with the Raiders as one of my dark horse contenders, there's a true possibility that the Raiders are one of the best offenses in the AFC.

Between Derek Carr, Josh Jacobs, Davante Adams, Hunter Renfrow, and Darren Waller, there are plenty of players who draw attention from the defense. In Adams' time in Green Bay, he was also surrounded by playmakers, and defenses saw how well they were able to stop him.

Now, the biggest detriment to this team could be their new head coach, Josh McDaniels, but if he even does an okay job, the Raiders should be just fine. This roster is littered with All-Pro talent at many important positions, so there's not much reason to think Davante Adams is going to slow down anytime soon. 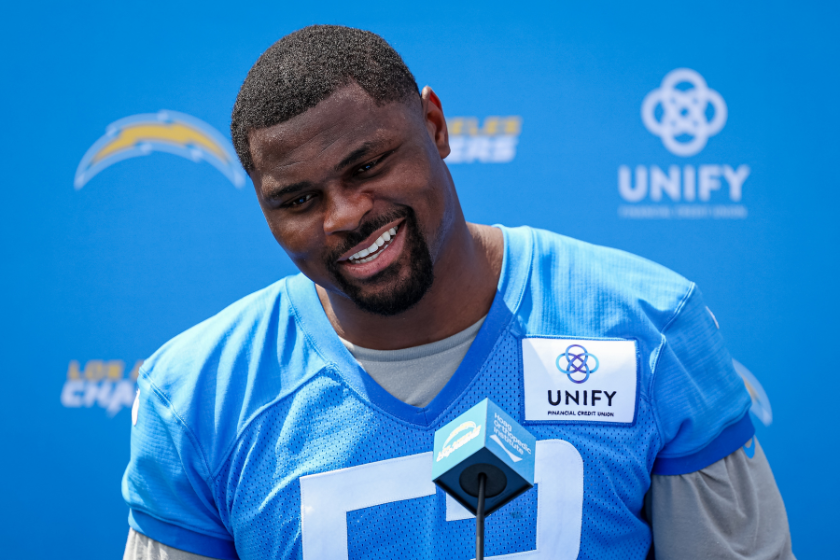 Khalil Mack is an absolute game-wrecker... when he's healthy. With age, Mack's ability to play a season from start to finish has become harder and harder to do. That said, prior to last season, Mack has only missed three starts in his career. However, last year, Mack only suited up for seven out of 17 games.

For Mack, last year was cut short due to season-ending surgery, and there wasn't really an urge to bring him back soon since the Bears weren't too relevant towards the latter half of the season. The Bears were -- and arguably still are -- a bad team, so keeping Mack out on the field to deteriorate his body even more would've been an ignorant thing to do, even if that was on-brand for the Bears under Matt Nagy.

Now, after an off-season trade, Khalil Mack finds himself lining up opposite of Joey Bosa on one of the most talent-filled rosters in the NFL. The Chargers are the team with a lot of buzz around them, both due to their weapons and the division they're in. That, and the Chargers have a heck of a coach in Brandon Staley. Putting all of those pieces together didn't happen overnight, however, now that they're in place, the Chargers are a team to look out for. And if Khalil Mack can continue the dominance he's put opposing offenses through, the Chargers are going to be a genuine Super Bowl threat. 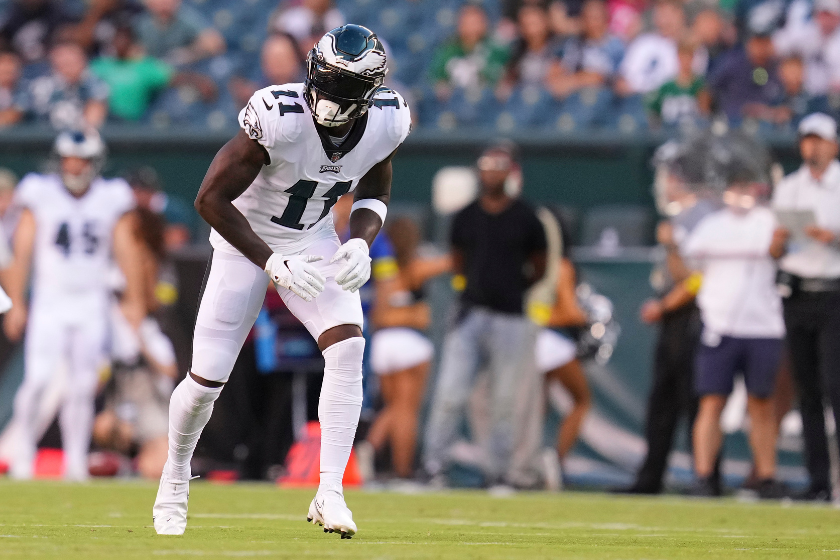 This name might not be seen as star-worthy, but A.J. Brown is absolutely a star within the NFL. In just three seasons, Brown's accumulated 185 receptions, 2,995 yards, and 25 total TDs. Not too bad for the No. 51 pick in the 2019 NFL Draft. Now, he becomes the true focal point of an offense that needs an identity, especially when airing the ball out.

Before heading to Philly, Brown shared an offense with Derrick Henry. For a receiver, that can't be too helpful, even if it helps win games. After being traded to the Eagles, he has a chance to be the one carrying an offense. Not to say that the weapons in Philly are bad, but A.J. Brown is the clear No. 1 target for the third-year quarterback out of Alabama and Oklahoma, Jalen Hurts.

With question marks surrounding Hurts and his ability to lead the Eagles offense with his arm, the acquisition of Brown should be seen only as a positive. DeVonta Smith was a rather lonely target, alongside Dallas Goedert, so Hurts' question marks were valid.  Now, with A.J. Brown, there are fewer excuses for the Eagles' QB. If he doesn't show improvement, it could be time for Philly to start looking for their next quarterback.

A.J. Brown, however, should be fine regardless of the quarterback. He's a dynamic playmaker, and he's an instant impact to any offense he goes into. That should be the case this year with the Eagles. 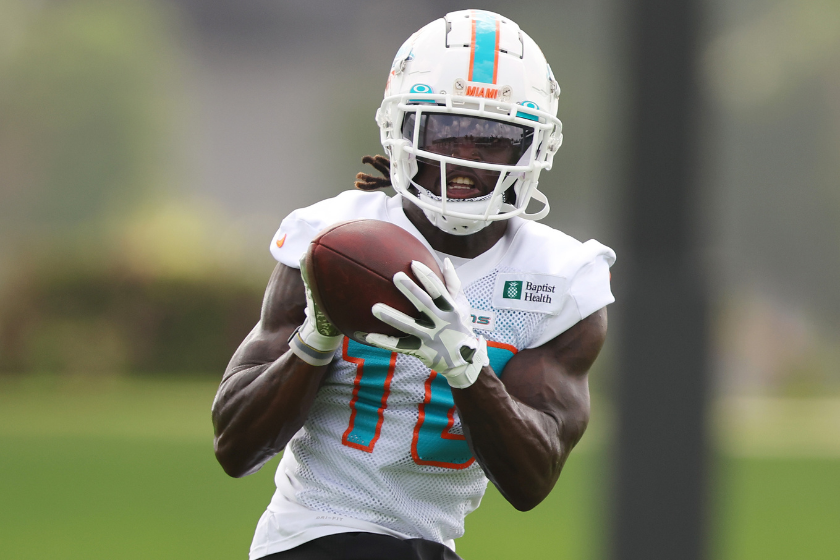 This one will be rather brief, as Tyreek Hill is one of the most electric playmakers in recent NFL history. In six seasons, Hill has accumulated 479 receptions, 6,630 yards, and 62 total TDs. In 2020 alone, Cheetah had 15 TDs. That's an unreal stat, and he's shown no signs of slowing down.

Now, the alleged transition from Patrick Mahomes to Tua Tagovailoa is at the very minimum a slight downgrade. Personally, I think the downgrade is significant, however, Tyreek Hill can produce regardless of who throws him the ball.

Considering the new head coach in Miami was the offensive coordinator for Deebo Samuel, it's likely that Tyreek can be used in that wide receiver/running back role. The characteristics Hill has complement that type of game, so it won't be detrimental to Tyreek if Tagovailoa is subpar. That said, many things coming out of Dolphins camp gives reason to believe that Tua Tagovailoa is going to prove a lot of people wrong this season. And with Tyreek being as supportive as he has about his new quarterback, that has to feel good for Tua.

Now, Tagovailoa likely can't make the long, downfield passes that Patrick Mahomes can play in and play out, but that's not super important for a player like Tyreek Hill. Once he gets the ball in his hands, regardless of where he is on the field, he has the potential to outrun any defender.

There's been a lot of negativity around Tua and the Dolphins within the last couple of years, so for him to get the perceived approval of Tyreek Hill, it's likely the bond between the two is strong. It's also likely Tyreek is a menace in Miami, so for those that enjoy explosive run-after-the-catch plays, pay close attention to the Miami Dolphins this season. 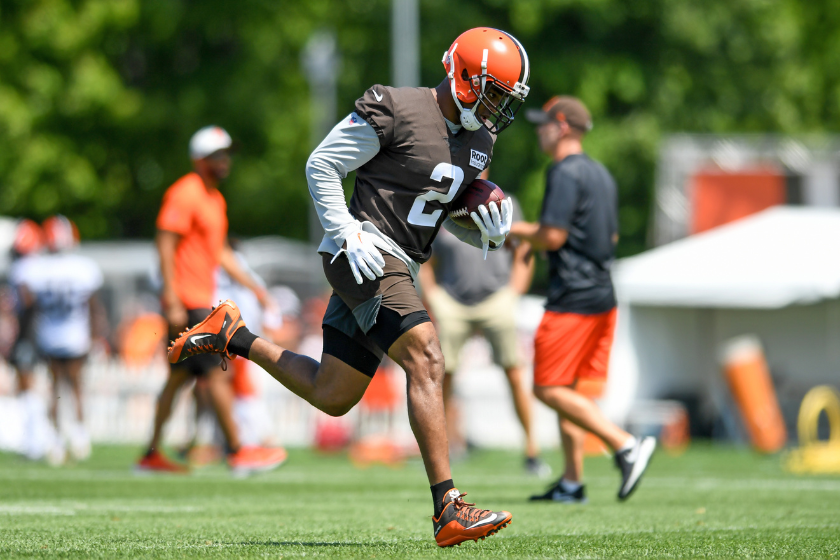 This one is interesting. Amari Cooper has been a household name for many, however, he's not a receiver ranked super high by NFL analysts.

At the time of his trade from the Dallas Cowboys, people were ready to crown the Browns as Super Bowl champs, however, with the uncertainty around controversial quarterback Deshaun Watson, Amari Cooper's production value goes down. It will especially be dragged down for 11 games this season, the length of Watson's suspension.

Cooper is a receiver who's eclipsed 1,000 yards five times in his eight-year career, so he's clearly a talented receiver. That said, the Browns haven't necessarily been an "air it out" offense the past few seasons with Baker Mayfield. Between the three-headed quarterback room in Cleveland last season (Mayfield, Case Keenum, and Nick Mullens), the Browns passed the ball a total of 520 times. That's as many as Joe Burrow had last season in total, and he ranked 15th among active quarterbacks. For comparison, the two quarterbacks Amari Cooper played with prior were ranked fifth (Derek Carr) and ninth (Dak Prescott) in pass attempts.

Now, when Deshaun Watson was active in the NFL, he was a gunslinger. So, once he serves his suspension, it's possible the two become an incredibly dynamic duo. That said, more arrows are pointing at the opposite side of that card, but it's all up in the air. 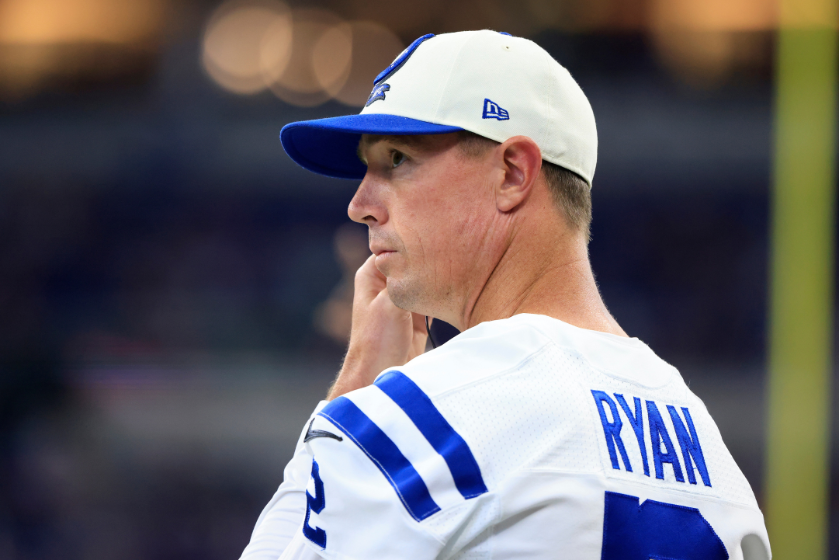 Last but not least, Matt "Matty Ice" Ryan. Matt Ryan is one of those quarterbacks who has the stats to show he's an incredible quarterback, yet, he's oftentimes left out of conversations surrounding top quarterbacks in the league. Part of that is due to his attachment to the Atlanta Falcons for 14 years. Of those 14 seasons, half yielded winning records. That said, Matt Ryan deserves to sit at the table of accomplished signal callers.

Now, in terms of what he could do in Indy, the sky is truly the limit. The Colts have an impressive offensive line, a strong running game, and a rising star in Michael Pittman. Add receiver Alec Pierce to the mix, and Ryan could truly do some damage in the league at the ripe age of 37.

Most of the limitations in Ryan's game come from his own body. He's getting older, and his body has taken a beating for a decade and a half. If he can stay healthy, the Colts could be a team to look out for, and he could see his name creep into the MVP conversation. 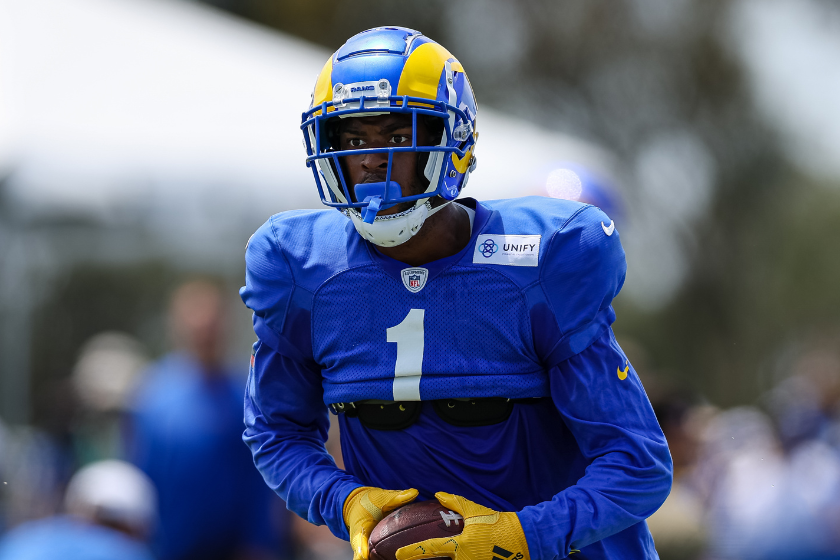 MORE: Overlooked Fantasy Football Options Who Will Make Any Team Owner Look like a Draft Genius