Few men throughout sporting history have fully earned the nickname "The Terminator."

Tough guy Arnold Schwarzenegger both coined the moniker while setting an impossibly high bar for future Terminators to reach.

To be called "The Terminator," you have to be as badass as Arnold. And unless you're the Italian Stallion, you probably aren't that badass. Most NFL football players aren't that badass, but there is one who is. Meet American Football defensive tackle Aaron Donald.

Donald has earned his "Terminator" nickname and set the bar for its use even higher. (He also goes by "Cheat Code.") He has been a gridiron wrecking ball in the National Football League since 2014. As the reigning NFL Defensive Player of the Year, he is terminating opposing offenses with extreme prejudice.

But there's a softer side to football's Terminator. Donald is a family man with two children and a wife. They run an organization in Pittsburgh, Pennsylvania, which reaches out to underprivileged youth through sports and community-based projects.

The Calabasas couple met in Los Angeles, where Donald has spent much of his NFL career. Now that he's a married family man, he's making moves to be a Los Angeles Ram for years to come.

Erica Donald is Aaron Donald's current wife. She formerly went by Erica Sherman, but she changed her name on Instagram, indicating the two tied the knot at some point. She also sports a massive ring on her ring finger at nearly all times.

They met while Erica worked in community marketing for the Los Angeles Rams. Erica is a Louisiana State University graduate and no longer works for the Rams.

She's currently the Vice President of Athlete Partnerships for game1, a sports-focused Hollywood production company, in addition to being Donald's personal marketing manager.

While helping the NFL star manage endorsements, she also serves on the board of AD99 Solutions, Aaron Donald's Pittsburgh-based outreach program. The foundation is Aaron Donald's way of giving back to the city that helped give him such an intimidating net worth.

Whether or not they secretly eloped (hey, maybe the star just didn't want all the publicity) doesn't really matter, but they live together with Aaron's children in Calabasas, California. They also welcomed their first child together in September 2021.

They chose the name Aaric Donald because it's a combination of both of their names.

Aaron Donald says he?s proud to welcome a third child to his family, Aaric Donald - a combo of his name and his wife, Erica?s. He now has two sons and a daughter and says they?re his motivation for everything.

Sherman makes frequent cameos on the footballer's YouTube channel and vlog series, which has more than 100,000 subscribers.

Aaron Donald is at the top of his game right now. With his wife and children behind him, Donald plans to Terminate NFC offenses for years to come.

Apologies to Jaelynn Blakey, who is not the woman depicted above. Erica Sherman is the woman above.

Blakey keeps a low profile and abstains from social media. She was raised in Pittsburgh and was Aaron's high school sweetheart.

It's unclear when Blakey and Donald broke up. Safe to assume, it was some time before Donald asked Erica Sherman to marry him. 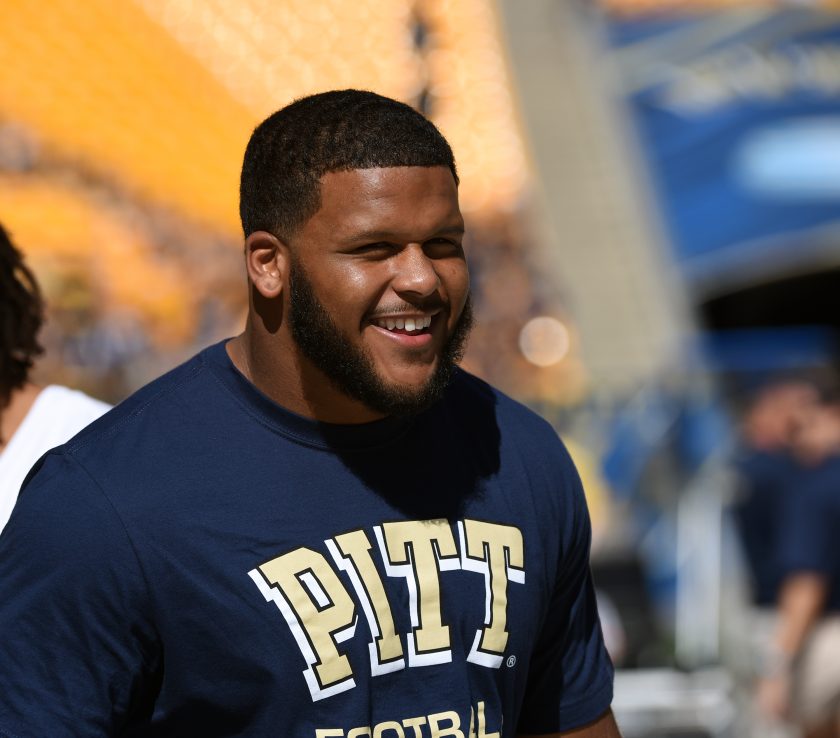 Aaron Charles Donald is more than a father of two and a defensive end for the LA Rams.

The football player starred as a defensive tackle at Penn Hills High School. Donald's father Archie would wake up Aaron and his older brother Archie Donald Jr. for early morning work-outs, even earlier than his mother Anita Goggins got up.

The early-morning family time spent in the gym paid off when Aaron received scholarship offers from Toledo and Pittsburgh. He chose to stay local and play his NCAA football career at Pitt.

Donald played four seasons as a University of Pittsburgh Panthers defensive linemen before declaring for the 2014 NFL Draft. He navigated Pitt through the transition from the Big East to the ACC, through three BBVA Compass Bowls and to one Little Ceasar's Bowl victory.

When Donald left Pittsburgh, he'd won ACC Defensive Player of the Year, the Bronko Nagurski Trophy, the Chuck Bednarik Award, the Lombardi Award, the Outland Trophy and earned Unanimous First-Team All-American honors. And that was just in 2013. 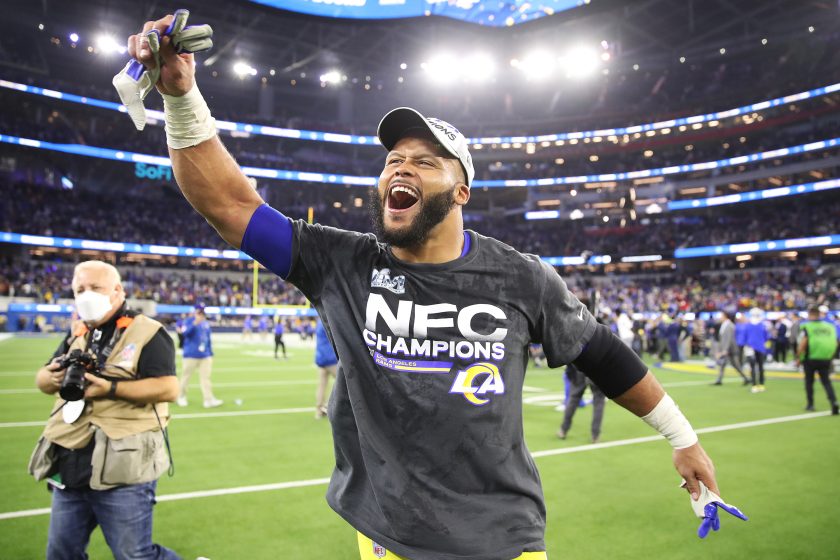 With the 13th-overall pick in the first round of the 2014 NFL Draft, the (then) St. Louis Rams selected Aaron Donald. Donald came off the board one pick after the New York Giants selected Odell Beckham Jr. Kahlil Mack went to the Oakland Raiders at No. 5 that year.

Since his All-Rookie Team season, Donald has been a Pro Bowl-level defensive tackle for the Rams organization. He won the NFL Defensive Rookie of the Year and was voted First-Team All-Pro team during his sophomore season. Donald has since made every Pro Bowl and All-Pro team since 2015 -- the last year the Rams were in St. Louis.

The franchise relocated and became the Los Angeles Rams (once again) in 2016. By 2018, Donald was up for a new contract. He became the highest-paid NFL player EVER on a six-year, $135 million deal ($87 million of which is guaranteed).

Donald's claim to highest-paid ever lasted less than a day, as Kahlil Mack signed an even bigger deal with the Bears soon after Donald made his announcement. Undeterred and angered, if anything, Donald proved he was worth every penny.

While Donald led the Rams defense, Jared Goff and Todd Gurley led the upstart offense to Super Bowl LIII, where they lost to (who else?) Tom Brady and the New England Patriots. The Rams defeated the Dallas Cowboys and the New Orleans Saints to get there.

Aaron Donald remains one of the NFL's most dominant forces in 2022. Teams must constantly double-team the consistent NFC Defensive Player of the Week, though he continues to put up huge sack numbers.

Behind Donald and the defense, as well as new quarterback Matthew Stafford, the Rams charged their way through the playoffs to play in Super Bowl LVI against the Cincinnati Bengals.

Donald, his loving partner Erica and his three children will assuredly be in Los Angeles cheering him on.