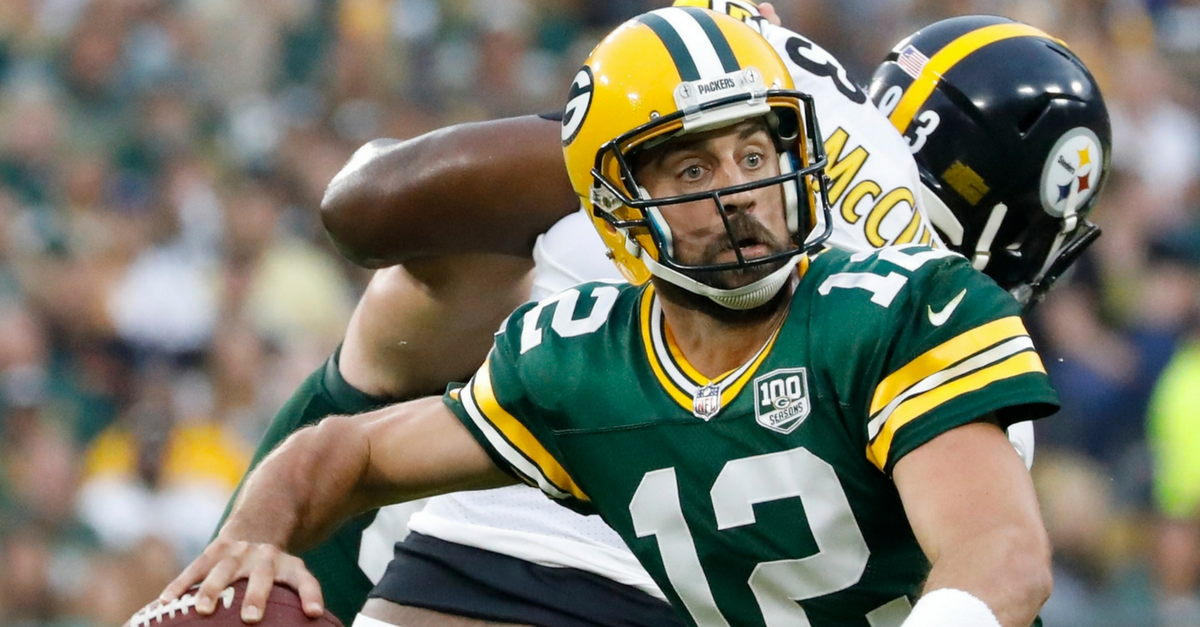 Aaron Rodgers is the heart and soul of the Green Bay Packers, one of the greatest quarterbacks to ever play, and a lock to be in the Pro Football Hall of Fame when he decides to retire. Anyone who debates any of that is flat-out wrong, but is he really worth the money he is about to get?

According to multiple reports, including from NFL Network Insider Ian Rapoport, NFL Network’s James Jones and ESPN’s Adam Schefter, the 34-year-old Rodgers has agreed to a record-breaking, four-year, $134 million extension that could ultimately be worth up to $180 million in total money to remain with the Packers through the 2023 season.

The kicker to it all? Rodgers’ new deal, which easily surpasses the one given to Atlanta Falcons quarterback Matt Ryan this offseason, includes nearly $103 million in guarantees and makes Odell Beckham’s Jr.’s recent mega deal look like chump change.

Aaron Rodgers’ new deal is expected to be the largest in NFL history and will tie him to Green Bay for well beyond the two years on his contract and quite likely for the remainder of his career.

It’s hard for anyone to wrap their minds around that kind of money, expect for Rodgers, the Chico, California native who is entering his 14th NFL season as the Green Bay Packers quarterback after being selected No. 24 overall in the 2005 NFL Draft from California.

Rodgers signed a five-year, $110-million contract extension in 2013, leaving him two years remaining on that contract before this new deal kicks in. He is now locked in to be the signal caller at Lameau Field in Green Bay, Wisconsin until he turns 40 as the highest-paid player in NFL history.

Perhaps most importantly about the superstar quarterback’s new extension is the record $57.5 million signing bonus, and the fact he will earn more than $80 million by St. Patrick’s Day in March.

The average value of his deal is $33.5 million annually. Not too shabby of a base salary.

Forget the six Pro Bowl selections, the two NFL Most Valuable Player awards in 2011 and 2014, and the Super Bowl XLV victory, where he also was named the game’s MVP. That kind of guaranteed money is absurd, and the most anyone has ever made in NFL history.

Not to mention, Rodgers is already 34 and is coming back from a shoulder injury suffered during Week 6 last season that limited him to only seven games.

Rodgers certainly has the credentials to be the highest-paid quarterback in league history, especially given the television contracts along with several other factors that make these kinds of deals happen.

As a starting quarterback, the two-time NFL MVP boasts an impressive 94-48 record. He has thrown for 38,502 passing yards with 313 touchdowns to just 78 interceptions, while also rushing for 2,670 yards and adding 25 more scores.

Rodgers holds NFL records for the highest career passer rating (103.8) and has the best career touchdown-to-interception ratio at 13:1. He is one of two active players to win multiple NFL MVP awards and one of two quarterbacks with multiple first-team All-Pro selections.

So is Rodgers worth that kind of new money? Given what he has done in the past, yes, but it’s almost like this new extension is a reward for what he’s done and not what he might do in the NFC North during the regular season and beyond down the road as his career slowly begins to wind down.