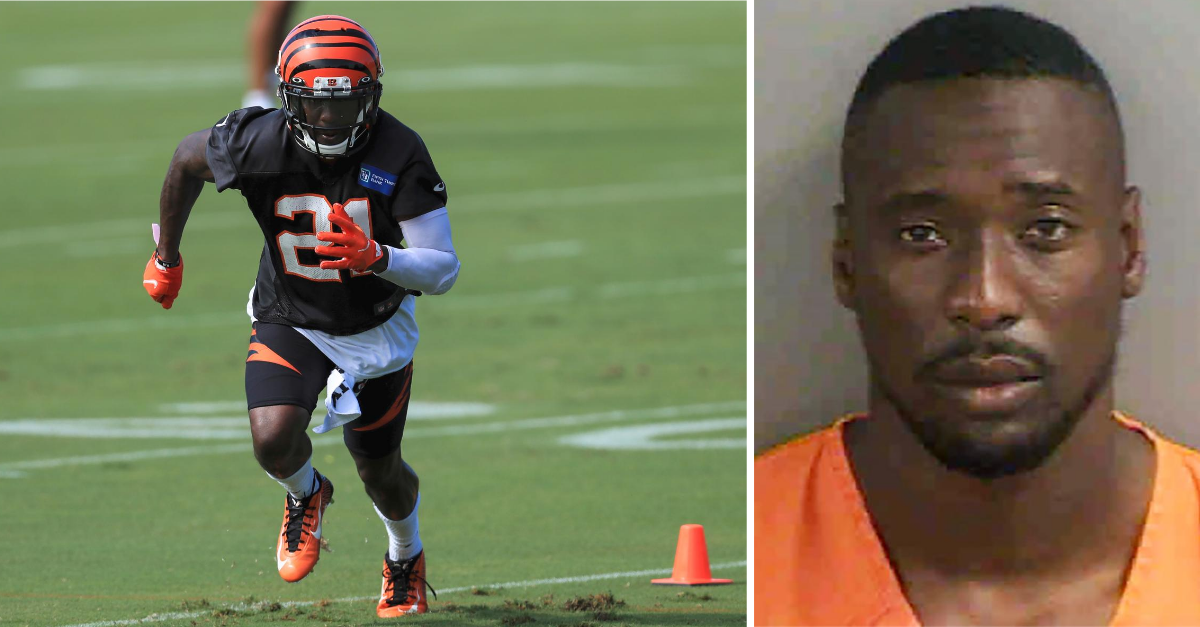 FORT LAUDERDALE, Fla. (AP) — Cincinnati Bengals cornerback Mackensie Alexander was jailed Wednesday on a charge of misdemeanor battery after deputies say he beat up a man shortly after returning to Florida to help search for his missing father.

Alexander, 26, and another man, 28-year-old Evins Clement, were arrested by Collier County sheriff’s deputies Tuesday night, not long after Alexander arrived back in southwest Florida where he grew up and his family still lives in the small farming community of Immokalee. Bail for the men was set at $2,000 each at a Wednesday afternoon court hearing and they are expected to be released soon.

“Mr. Alexander’s only concern is the well-being of his father,” the men’s attorney, Brian Pakett, said. “He wants to find him and find him well.”

The battery charge against #Bengals CB Mackensie Alexander is a misdemeanor. Another man is also in custody. Hearing at 2 p.m.

From attorneys Brian Pakett and Stacey Richman: “The only concern that Mackensie has right now is finding his father and the well-being of his father.” https://t.co/qBbKE5psWS

Alexander had left Bengals training camp earlier Tuesday to assist the search for his 65-year-old father, Jean Alexandre, a Haitian immigrant who uses a French spelling of the family’s surname. Investigators say Mauricet Etienne told them he, Alexandre and others drove about 80 miles (130 kilometers) to pick palmetto berries in Okeechobee County on Monday.

According to a missing person’s report released Wednesday, Etienne, 56, said that after several hours of picking, he could not find Alexandre and spent three hours searching for him before returning to Immokalee to pick up Alexandre’s wife, Marie. They returned to Okeechobee County, where they searched for another 45 minutes before heading back to Immokalee and calling deputies.

Etienne told deputies he had no ill will toward Alexandre. He agreed he should have called law enforcement when he first discovered Alexandre was missing, but he said he was afraid because he had been previously told by deputies that he did not have permission to pick berries in that area.

The Okeechobee County Sheriff’s Office said Wednesday that they are searching for Alexandre but referred all other questions to Collier County.

According to Alexander’s arrest report, he and Clement had gone to the home of the man he’s accused of assaulting “to discuss a previous incident.” Collier sheriff’s officials declined to say if the man is Etienne, citing a Florida law that shields the names of crime victims. But in a redacted recording of a call, the victim’s son made to deputies from his own home, he said his father’s attackers are angry because they think he is responsible for a man who had gone missing on Monday.

The report says Alexander tried to convince the man to go with them, but he refused, saying he was scared of retaliation. The man told deputies that Alexander then threatened to get a gun from his car. When he still refused to go with them, the victim said Clement grabbed him and Alexander began punching him in the face.

The two fled when they heard sirens approaching but were arrested a short time later.

Deputies said the victim suffered a cut lip and forehead.

“We recognize that this is an emotional and frightening time for the family and friends of Jean Odney Alexandre. However, everyone must act within the law,” sheriff’s spokeswoman Michelle Batten said in a statement.

In 2016, ESPN made a documentary about Alexander and his family, “ Gift from the Groves,” about his life growing up in Immokalee. His parents worked as pickers in the orange, squash and pepper fields for $300 a week combined. When Alexander and his twin bother, Mackenro, turned 10, they also began picking oranges on weekends.

Alexander starred at Immokalee High School, then headed to Clemson, where he starred for two seasons. Selected in the second round of the 2016 draft by the Vikings, Alexander had an up-and-down four seasons with Minnesota, primarily as the No. 3 cornerback, or the nickel position.

Vikings coach Mike Zimmer did not hold back criticism of Alexander in his early years, but during training camp last season, Zimmer said Alexander had “turned the corner as far as coaching and believing in the system” as well as anyone on the team. Alexander had two interceptions over 55 regular season games with the Vikings.

He signed with the Bengals as a free agent during this past offseason.

MORE: Earl Thomas’ Wife Caught Him (And His Brother) In Bed With Multiple Women