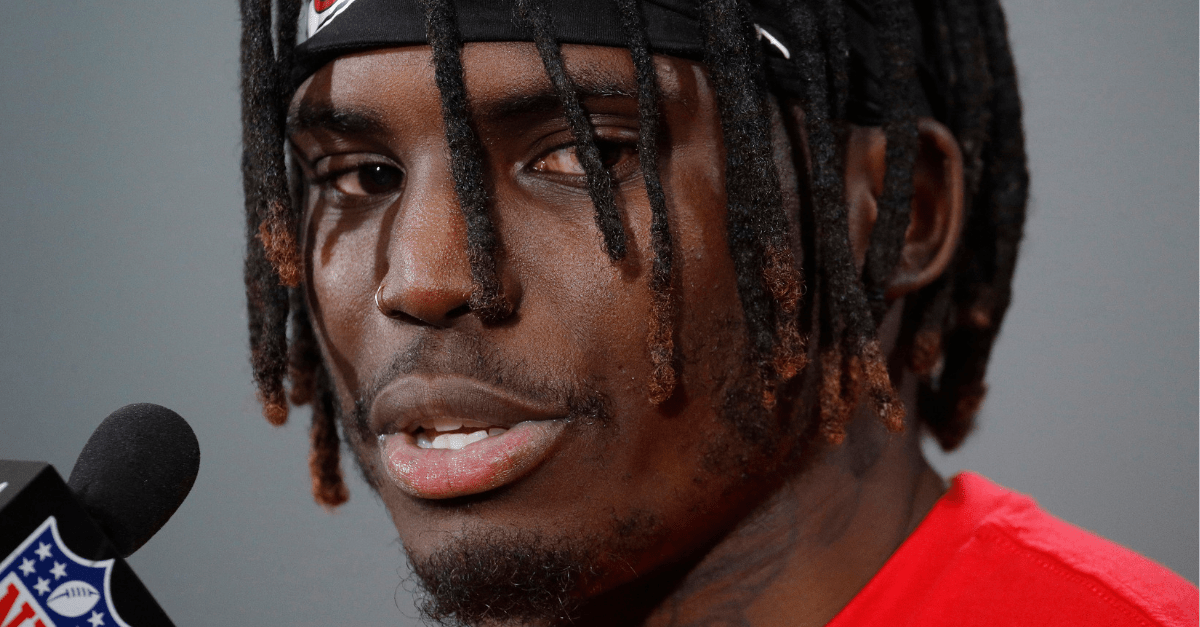 OLATHE, Kan. (AP) ? The Kansas City Chiefs effectively suspended Tyreek Hill from all team-related activities Thursday night while they investigate an audio recording that aired on a local TV station in which the star wide receiver’s fiancee accused him of abusing their 3-year-old son.

The recording surfaced one day after prosecutors said they believed abuse had occurred in Hill’s home last month but that they could not press charges because it was unclear who committed the crime.

Chiefs general manager Brett Veach read a statement after the conclusion of the first round of the NFL draft that said the team became aware of the recording between Hill and his fiancee, Crystal Espinal, in “real-time” ? just like the general public.

Afterward, Veach called Hill’s agent, Drew Rosenhaus, and informed him that Hill would no longer be allowed to work out with the team. The Chiefs are in the midst of voluntary offseason workouts.

“We were deeply disturbed by what we heard. We have deep concern for Crystal, and are concerned for Tyreek, but we have real concern for the child,” Veach said in his statement. “We are going to continue to gather information and we will make the right decision.”

Veach declined to take any questions. Chiefs coach Andy Reid and chairman Clark Hunt, who also were in the building for the start of the draft, were not made available.

Police were called to Hill’s home twice last month and investigators determined their child had been injured. On Wednesday, Johnson County District Attorney Steve Howe said charges would not be filed but that he was “deeply troubled” by the situation and said “we believe a crime has occurred.”

Howe also said the case could be reopened if new information surfaced.

Hill released a statement through his attorney earlier Thursday in which he said his “son’s health and happiness is my number one priority.” Hill said his focus is on “working hard to be the best person for my family and our community that I can be, and the best player to help our team win.”

Less than eight hours later, KCTV in Kansas City aired part of an 11-minute audio file in which Espinal tells Hill that when asked about an injury to the child’s arm, the boy replied:, “Daddy did it.”

Hill denied any role in what happened to the child, saying: “He says Daddy does a lot of things.”

Espinal also tells Hill their son is “terrified of you.”

Hill replies, “You need to be terrified of me, too, bitch.”

Later in the conversation, Espinal asks Hill, “What do you do when the child is bad? You make him open up his arms and you punch him in the chest.”

KCTV said the audio was sent to the station without disclosing from whom. The station said it had shared the audio with Howe’s office, which did not return a message late Thursday.

Hill is a two-time Pro Bowl wide receiver with a history of domestic issues, including a case in which he was accused of punching Espinal while she was pregnant and they were attending Oklahoma State.

Hill’s attorney, Trey Pettlon, has said that the wide receiver has cooperated with law enforcement throughout the investigation. Pettlon also said that Hill waived his Fifth Amendment rights, answered questions from law enforcement and the Department of Children and Families, and that he would continue to cooperate with authorities as they provide a safe environment for the child.

That statement was thrown into question by the audio, during which Espinal indicates she covered for Hill while answering questions from investigators: “Now I really want you to sit and think about it,” she tells Hill, “because I rode for you against that detective.”

Howe would not say who has custody of the child other than to say he is safe.

“We’re talking about a minor, a child, and the system and DCF and in child investigations, we have to be very cognizant about protecting the rights of the child,” Howe said Wednesday. “We have to respect the wishes of the individuals involved in the case.”

The Chiefs will probably release Tyreek Hill soon. If they don't, the next column will be much easier to write than this one about an American tragedy: https://t.co/ncoYTNU9zR

Hill is entering the final year of his rookie contract, and the Chiefs have little depth at wide receiver. That means it is possible the Chiefs could target a pass-catcher when they make one of their three picks Friday night ? they traded their first-round pick to Seattle earlier this week as part of a package to acquire pass rusher Frank Clark, who has his own history of domestic violence.

Last year, the Chiefs released star running back Kareem Hunt following a video that showed him pushing and kicking a woman in a hotel hallway.

Before the audio of Hill was broadcast, NFL Commissioner Roger Goodell warned about making any judgments before getting all the facts. But he did make it clear that Hill could be punished under the league’s personal conduct policy, regardless of the legal situation.

“You don’t make a decision without having those facts,” Goodell said.