Week 2 of the NFL season was like any other week of the NFL -- madness occurred early and often. With this madness came many bets you may have thought you had locked up, only to see them fade into oblivion within minutes.

These are bad beats -- you thought you had a bet you made wrapped up only to see it thwarted by the team you bet on, the other team, or hey, "the betting gods." Here, we have six bad beats from Week 2 to reflect on. 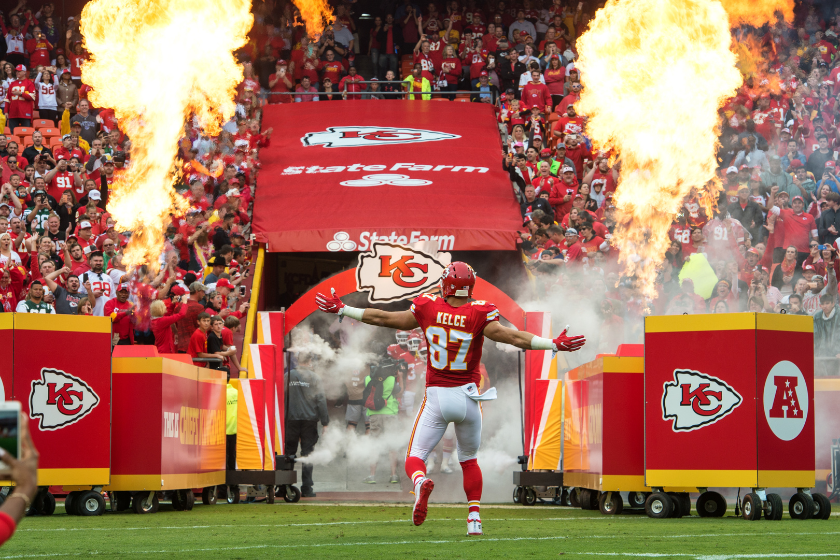 RELATED: As Arrowhead Stadium Turns 50 Years Old, the NFL Landmark is Louder Than Ever

Covering this spread for about nine minutes or so, Chiefs -4.5 bettors rejoiced as they took a seven-point lead with 10:29 to go in the game, followed by adding another three points with 3:20 to go. With so few minutes left to play, you thought you could finally breathe a sigh of relief.

In the context of this game, Chargers quarterback Justin Herbert got hurt pretty badly after taking several big hits. As it turns out, Herbert, according to Daniel Popper of The Athletic, has a rib cartilage injury. With this at play and the 10-point lead, surely the Chiefs would wrap this one up.

The Chargers final drive of the game would consist of nine plays across just over two minutes. With 2:05 to go in the game, the Chargers had a fourth-and-1 only to complete a pass to wide receiver DeAndre Carter for eight yards.After the two-minute warning, the Chargers got within seven yards of the end zone, but faced fourth-and-goal.

Did the Chiefs stop this rather improbably play? Nope. Herbert hit wide receiver Joshua Palmer in the end zone for a touchdown, followed by the extra point.

The Chargers lost 27-24, but the Chiefs -4.5 bettors saw their last-gasp-effort dissipate. 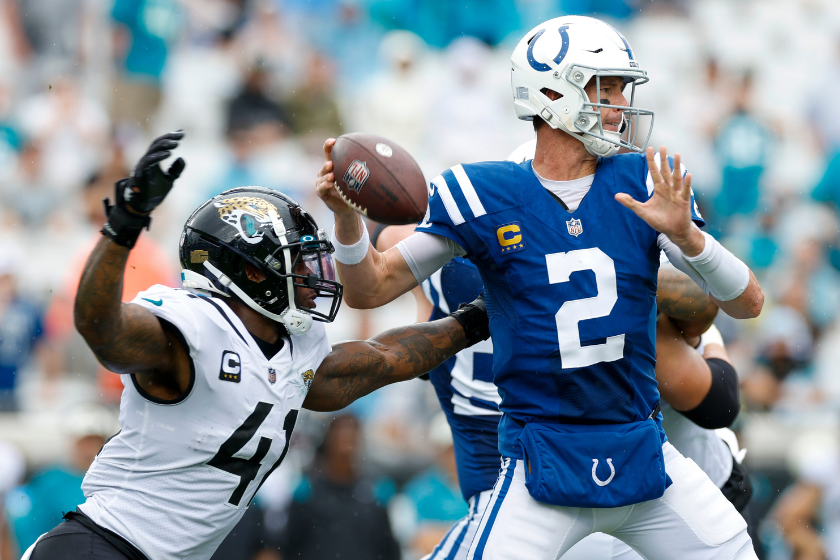 This bad beat is a bit of an exception. With these, we mainly look at winning bets turned sour, but this isn't the case. Instead, we're in the process of writing the Indianapolis Colts' obituary.

They're terrible. Simply terrible. Three-point favorites against the lowly Jacksonville Jaguars, the Colts put a goose egg, losing 24-0. Colts quarterback Matt Ryan was especially bad, completing 16 of 30 passes for 195 yards and three interceptions. The team was without wide receiver Michael Pittman and Alec Pierce, but still, to lose this badly? It's almost unfathomable.

Who wins the AFC South now? 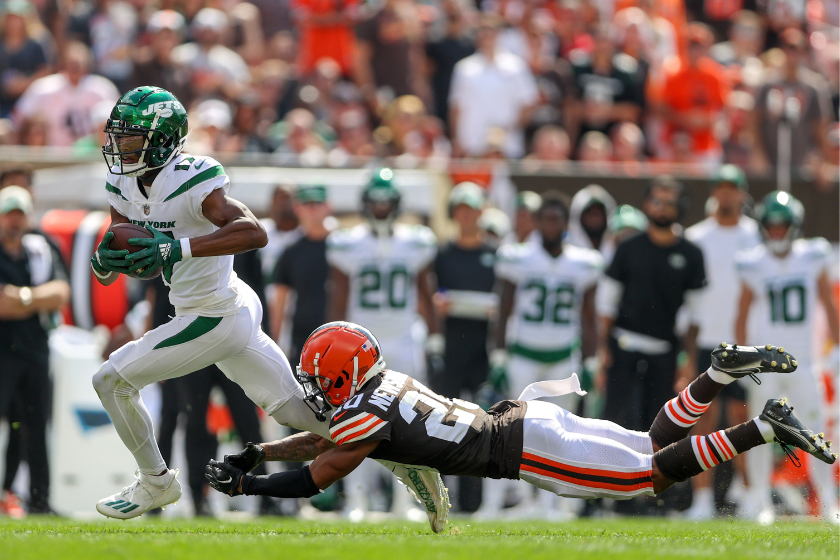 RELATED: Reintroducing "Brownie the Elf": The 76-Year Old Cleveland Browns Mascot Who Will be Their Midfield Logo

Heading into this as nearly a touchdown favorite with Jacoby Brissett at quarterback, perhaps, in hindsight, this -6.5 point spread was a bit too much. Though, to be fair, the Jets and quarterback Joe Flacco looked putrid in Week 1 against the Baltimore Ravens.

However, with 1:55 to go, the Browns were leading 30-17. Browns -6.5 bettors needed to fend off a Jets score with less than two minutes remaining. Come on, Flacco is the quarterback. This one is all but over, right? Well, the Browns not only didn't cover but lost outright.

With 1:22 left in the game, Flacco hit wide receiver Corey Davis for a 66-yard strike. The score was now 30-24. Browns -6.5 bettors already lost, as the Browns would have certainly just kneeled it out and won.

Instead, the Jets did an onside kick and recovered it. Then, over the course of exactly one minute, Flacco and the Jets marched down the field before he hit rookie wide receiver Garrett Wilson for a 15-yard touchdown. Browns -6.5 bettors were sad, but hey, there's still some time left in the game.

Well, that didn't matter. Brissett threw an interception, and the Browns completed the collapse in style. 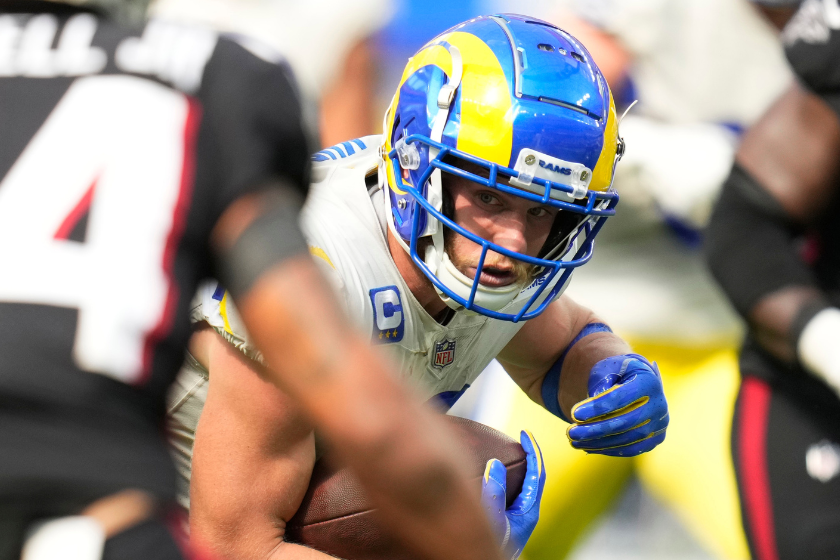 Leading 31-10 in the fourth quarter, the Rams were easily handling the Falcons. Ironically, this was the final score of the Rams loss in Week 1 to the Buffalo Bills. Then, Falcons quarterback Marcus Mariota hit wide receiver Olamide Zaccheaus for a touchdown. OK, OK, still up by 14. No problem. Everything's fine.

The Rams then had the ball and got ready to punt with 4:57 left to go in the game. This defense should be able to fend off the Falcons offense and let this clock run out. Easy win. Well, well, what do we have here -- a Falcons linebacker surges in and blocks the punt. To add insult to injury, the punt was returned for a touchdown.

The Rams were then up 31-23. They're no longer covering, but maybe they will get another touchdown at the end of the game on a big play.

The Falcons then got the two-point conversion and pulled within six points, trailing 31-25. To avoid another blocked punt, the Rams had Brandon Powell take the direct snap and run backward and out of bounds for a safety.

The Falcons then get a chance with six seconds left to hurl a Hail Mary but instead fumble, securing a victory for the Rams, but seeing the 10-point spread diminish in a hurry. 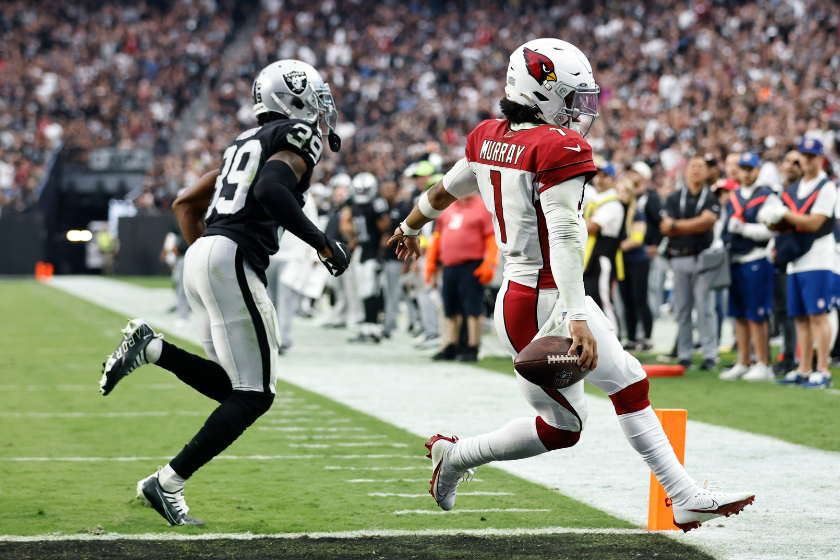 This game was wild.

The Cardinals looked like a fish out of water for pretty much the entire game, scoring just seven points through three quarters and an additional seven minutes or so in the fourth quarter. However, with 8:13 to go in the game, the Cardinals scored a touchdown via a Darrel Williams one-yard run.

The Cardinals faced a fourth-and-1 with about 2:20 to go in the game. Murray dashed to the right for a first down. Then, the Cardinals found themselves with yet another 4th down, but this time, with four yards to go.

The Cardinals were on about the six-yard line. Murray dropped back, and couldn't find anyone open, Raiders edge rusher Maxx Crosby was breathing down his neck, wrapped him up, then Murray got away. He threw a pass out of the endzone. The Raiders win.

Hold up. Before the pass, the Raiders had a holding call, and now the Cardinals face first-and-goal on the three-yard line. Out of the shotgun, Murray hit wide receiver A.J. Green for a pass, but he dropped it. Then, with eight seconds to go, Murray almost threw an interception to Raiders safety Jonathan Abram.

Now it's 4th & goal from the three-yard line. Five seconds remain in the game. Murray's in the shotgun. He takes a direct snap, steps up in the pocket, and runs immediately to the left side for the three-yard score.

At this point, the Cardinals are down 23-21. Ironically, if you bet the Raiders -5.5, you want them to convert this, go into overtime, and score a touchdown to win by six. Murray did convert it, hitting Green.

We indeed go into overtime. How does the game end, though?

And, what a disaster for Raiders -5.5 bettors. 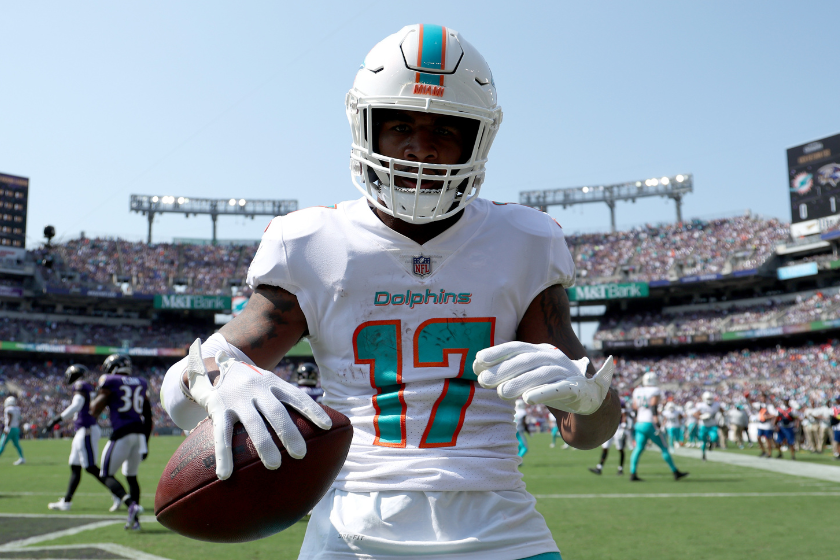 While the Cardinals and Raiders game was wild, we have another descriptor for this Ravens/Dolphins game: bonkers.

Entering the fourth quarter, the Ravens had a commanding 35-14 lead. However, the Ravens saw this lead go up in smoke over about seven minutes.

At this point, the Dolphins tie the game. Then, the Ravens and kicker Justin Tucker notch a 51-yard field goal to take the 38-35 lead with 2:18 to go.

OK, the Ravens -4.5 is set to lose, but if you took the moneyline, you feel better. Then, with 14 seconds left in the game, Tagovailoa finds wide receiver Jaylen Waddle for a seven-yard touchdown, completing a six-play, 68-yard, 2:04 drive.

The Ravens defense crumbled in the fourth quarter, and the team was outscored 21-3, taking a massive loss at home. Meanwhile, the Dolphins offense looks scary, and its only Week 2.