You know the football season is in crunch time because we have our first NFL Saturday of the season. The marquee Saturday showdown of Week 15 is the 10-3 Buffalo Bills hosting the 8-5 Miami Dolphins and major AFC playoff implications are on the line. The Bills need to keep winning if they hope to secure the top seed in the conference and a first round bye, while the Dolphins are looking to break a two game losing skid and keep their head above water in the AFC. Let's see if we can handicap this game adequately to give ourselves a real rooting interest for Saturday night's game, the Bills vs Dolphins.

Why is this Total So Low? 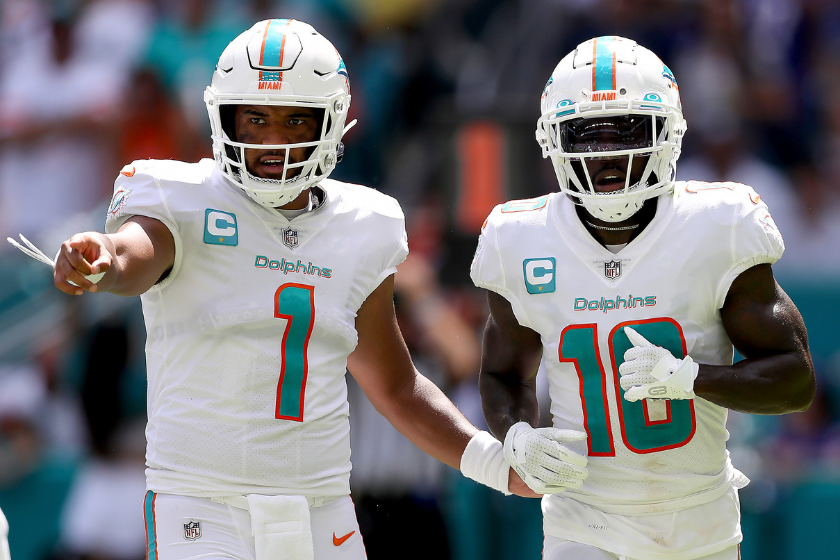 The first thing that stood out to me about this line is that the total feels remarkably low. Buffalo scores over 27 points per game and more than 30 at home, while the Dolphins average more than 24 points a contest. So what on earth makes the sportsbooks want to set this line around 42?

Whenever you see a total in an outdoor game that doesn't make sense, you need to immediately check two factors; the injury report and the weather. The most impactful player on the injury report in real danger of missing this game is Dolphins starting left tackle Terron Armstead. Missing him in the lineup would be a significant issue for a Miami offensive line that has to keep the Bills talented edge rushers out of the backfield if it has any hopes of winning, even with Von Miller out for the season. Still, this isn't a particularly daunting injury list, and not one that should have a total between these two teams so much lower than their normal scoring output. So we have to move on to the weather report in Buffalo for Saturday's game.

But the deeper issue with the forecast is that these are the MIAMI Dolphins we are talking about. Historically Miami is a franchise that has struggled coming to the cold northeast in the later parts of the year. It's much easier for a cold weather team to practice indoors and simulate warm weather conditions, than it is for sunny Miami to simulate a practice in the snow.

To me this winter storm impacts more significantly the point spread in this game than it does the total amount of points, as Buffalo is a team designed to perform its best in the most difficult winter conditions. While it's never particularly sexy to bet the over on points in a game that you expect to be played in the snow, the lack of extreme wind should allow both teams to adequately pass the ball despite the elements. While snow does alter some play-calling, this storm doesn't seem like enough to drop a total between two potent offenses to 42 points. The public and sharp bettors agree with me, as 77% of the bets and 84% of the early money are on the over.

Should Recent Performances by these Teams or their Last Meeting Play a Factor? 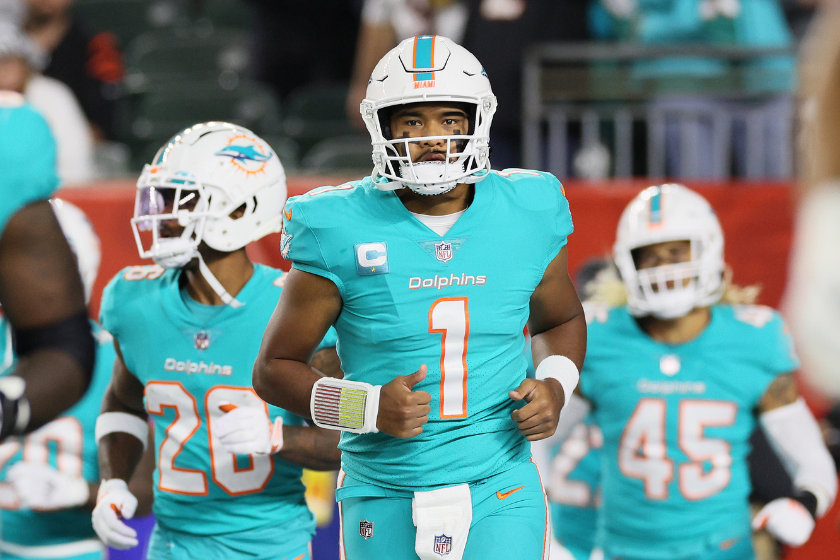 The Dolphins have had a few peaks and valleys this season. Miami has lost their last two games and scored only 17 points in each. In the four games before this skid the offense was on a tear, scoring 30 or more in each contest, all wins. One of the biggest changes of late is that Miami has struggled to run the ball the last two weeks, which has resulted in more pressure on Tua to make plays against competitive coverage in the secondary.

Miami also faced a daunting task of two road games in a row on the west coast against very competitive teams. After staying out west for two weeks, the Dolphins have flown back east and then will fly north to Buffalo. This is a ton of travel for a team now playing on a short week after taking on the Chargers on Sunday night.

The Bills on the other hand have won four in a row and haven't had to travel farther than New England since Thanksgiving. This gives Buffalo a significant advantage both with the lack of travel, the familiarity with the elements and their current string of positive performances.

These teams met in Week 3 and the Dolphins came away with a 21-19 win, but there are a few reasons we shouldn't put too much stock into this early Dolphins victory. The weather on September 25th in Miami was 89 degrees, about 65 degrees warmer than it is expected to be this weekend, and the on game temperatures were likely closer to triple digits.

Aside from the on-field climate, the game flow was not what you would expect in a 21-19 Dolphins win. Tyreek Hill was kept largely in check with only 2 catches for 33 yards and Tua Tagovailoa threw only 18 passes. Meanwhile Josh Allen threw a whopping 63 times for 400 yards, yet the Bills managed to get the ball into the end zone just twice. The Bills had more than twice as many yards but couldn't pull off a victory.

The second-half performance was the opposite of what we've grown to expect from Josh Allen and the Buffalo Bills, an inability to finish drives or take command of a game in the fourth quarter. Now two-and-a-half months later, the Bills seem to have found their rhythm. During their current four game winning streak, Josh Allen has accounted for 8 touchdowns to just one interception.

While Tua's season-long stats remain fantastic he has struggled the last two games, throwing two interceptions against the 49ers and completing just 35 percent of his passes last week against the Chargers. As he has cooled off, so has the potent Dolphins offense.

I think that the most recent games are much more valuable when handicapping this week's contest than their last meeting, which took place under such different conditions.

Key Matchups in this Game 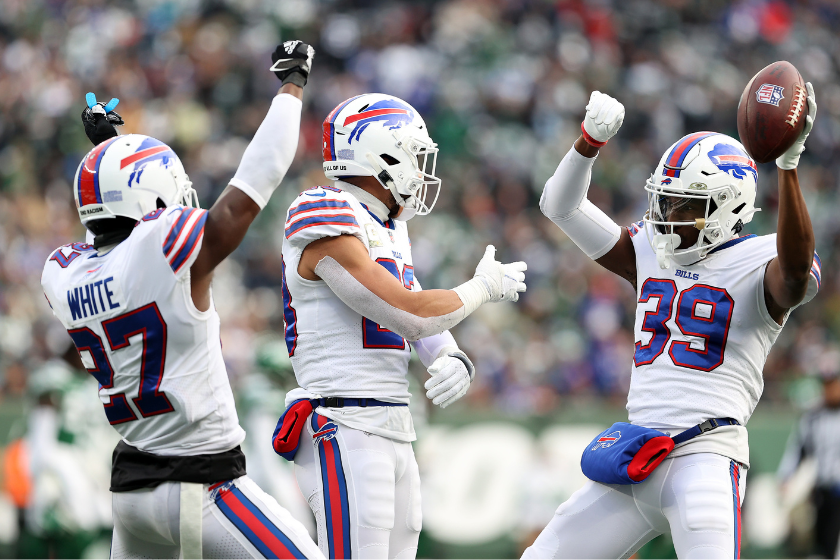 The Bills did a great job limiting Tyreek Hill earlier this year. The Buffalo secondary has been plagued by injuries but with Tre'Davious White now back at corner, the Bills should have an even better shot at containing a very potent Miami offense.

The biggest matchup to me is how the Bills rush defense fairs against an incredibly fast Dolphins team. The Bills have the fourth ranked rush defense and have contained some potent running offenses over the last few months, but now they have to do the same in snowy conditions, which could prove more difficult. Rush lane integrity is so critical in a bad weather game, because one missed tackle could mean a long touchdown run, as it is hard for members of the secondary to change direction and cover ground at the second level the way they would in better conditions.

The speed of Miami at every skill position means that the Bills will want to play with deep safeties and multiple defensive backs. This puts an even greater responsibility on the five men up front to stop the run and get pressure on Tua. If the Dolphins can force Buffalo to commit more players to the box, then their big play ability down the field or on bubble screens opens up even in the winter weather.

So After All This, Where Should We Place My Money? 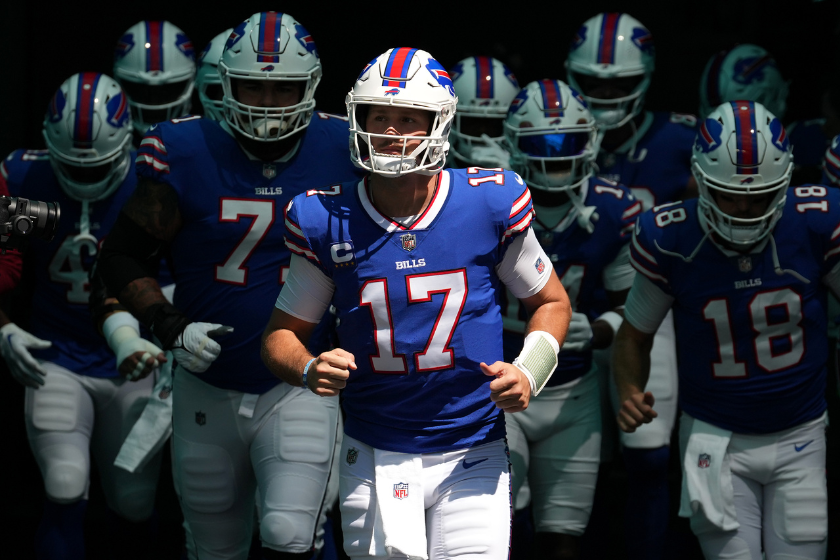 RELATED: Mike Leach's 5 Greatest Interview Moments, From Weddings to the Mythic Powers of a Sun Devil

It's always risky when you add a weather prediction into your assessment on a point total, but I think there is a good chance the total has been overcorrected for the expected conditions. As long as the wind remains under 10 miles per hour, then both offenses can pass the ball and that should enable their talented skill players to succeed. Plus, sometimes snowy conditions create easy opportunities for points off turnovers, and we want to capitalize on that as bettors.

I suggest betting the over at 43.5 points or 43 points. Place your trust in the talented offenses and the incredible coaching staffs behind them. Even if this total gets lower closer to game time, it is easy to up the bet amount if the line moves in your favor, and far worse if the total shoots up a few points if the storm weakens.

The largest bet I will be placing on this game is the Bills -3.5 in the first half. I very rarely place first-half bets, but I am 2-0 this season when I do and usually only do it when I think there is a distinct advantage early in a game. The advantage here is that the Miami Dolphins have had to travel cross country and then north on a short week. This likely means they will come out slower than a Buffalo team fired up in front of its home crowd on a Saturday night game. Secondly, it will take the Dolphins longer than the Bills to adapt to the snowy and cold weather conditions and that gives Buffalo a tremendous edge to start the game.

Finally, I will place my smallest bet on Buffalo -7.5. A lot of the sharp early money is on Miami, but I have been watching AFC East football tirelessly my entire life. The Dolphins don't win in the northeast in December, and there is a chance they will be thinking about warming up on the bus before this contest is over. I think we see a 35-20 Bills victory, with no field goals.

The narrative after the game will be 'What is wrong with Tua?', but really the Dolphins have just played three very good teams in a row all on the road. So don't overreact to that, but take the Bills and the over in Buffalo. After all, who doesn't want to cheer for 50-plus points on a Saturday night in the snow?