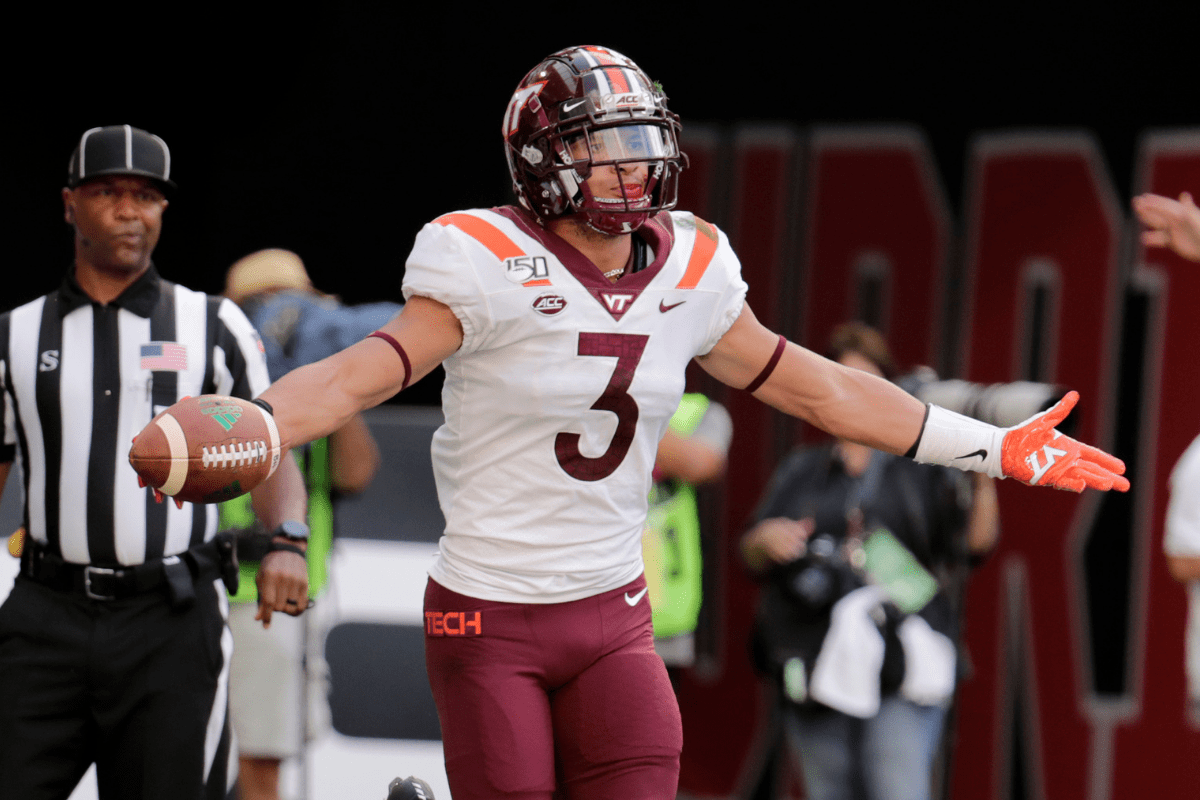 He was the first college football player to sit the season out due to the coronavirus pandemic. His decision to do so stemmed from the loss of a loved one.

He was raised in Tar Heel Country but chose to become a Hokie. The standout QB did what his team needed and switched to wide receiver and ultimately defensive back in college. When he lost his knee and his mother, Farley relied on faith to survive.

He came roaring back the following season and to a screeching halt when the pandemic hit. He knew he had to stand up for the safety of his father, his one remaining parent.

His decision may have scared him, but make no mistake: NFL scouts like what they see in Farley.

Caleb Farley was born on November 2, 1998, in Hickory, North Carolina. “One Week“, by the Barenaked Ladies, was No. 2 for the third week in a row.

Farley threw way more touchdowns than interceptions as the Maiden High School quarterback. Despite high school success, the athletic quarterback only scored offers for non-QB-related scholarships. With his size and speed, coaches saw him playing more as a wide receiver or DB. He turned out to be good at both.

Caleb Farley chose head coach Justin Fuente, the Virginia Tech Hokies, and the ACC over the South Carolina Gamecocks. Farley spread his wings at wideout but was quickly grounded. With a twist, snap, and pop – Farley suffered a season-ending ACL tear after a promising spring game at wide receiver.

Farley was devastated. His first college football season in Blacksburg was over.

Without the ability to test his mettle against ACC powerhouses like Clemson and Miami, Farley chose to spend less time at college and more at home. With his mother’s condition in decline, Farley’s knee injury proved to be a blessing in disguise.

Caleb Farley tore his ACL in Fall 2017 and lost his mother to breast cancer a few months later in January 2018.

North Carolina-native Robin Farley had defeated cancer once before when Farley was younger. The disease proved too much for her during the second bout, leaving Farley to wrestle with his faith. He’s determined to make his mother’s death a point of inspiration rather than one of desperation.

The football player is said to have inherited eternal optimism from his mom.

While papers reported her passing from Richmond to Roanoke, Farley needed space to heal. He turned to his family, faith, and football. All three remain strongholds today.

After his mother’s death, Farley returned to college football with a fury. After stellar freshman and rookie seasons (he was able to redshirt the year he was injured), Farley’s future looked limitless. Then, with his mother on his mind, Farley was tested again.

2020 came as a shock to everyone, not just you and me. We all had questions to answer concerning our own health and that of others. Virginia Tech CB Caleb Farley was no different. Where he was different was in what he chose to do about it.

With the country riding the second wave into summer, Farley became the first major FBS starter to opt-out of the season for coronavirus-related reasons. Given his family history, his concerns are founded. The young corner has already lost one parent. He couldn’t risk losing another.

His bold decision to forgo his last season won him praise, but he worried it would cost him the NFL Draft.

Up until early April, Farley’s fears proved unfounded. He is still predicted by many to be a first-round pick but recently uncovered back problems have hurt his field position considerably.

Farley may be First-Team All-ACC, but his resume noticeably lacks performances against powerhouses like LSU, Ohio State, Oklahoma, or Georgia. That, combined with a bad back, has caused Farley to slip in some polls.

ESPN still has him pretty high up there, though. Farley knows he couldn’t reach these heights without his mom. He’ll have to rely on memories of her for now. It’s too bad. The young cornerback certainly would have made her proud.

MORE: Mac Jones? Parents Were College Athletes Before He Was