Cameraman Levels NFL Cheerleader, And She Takes It Like a Champ 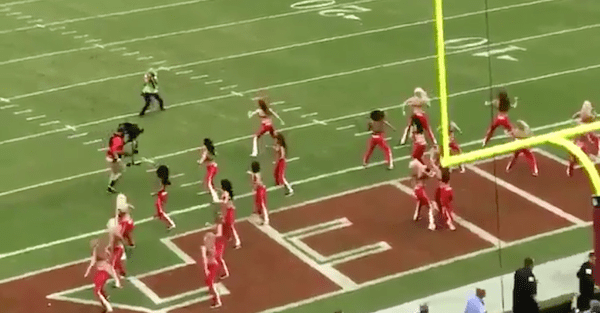 Sometimes people do things that make you wonder how so much stupidity could possibly exist.

Well, in 2017, we witnessed a moment that we couldn’t script if we tried. During the Kansas City Chiefs‘ 27-20 victory over the Philadelphia Eagles, the Kansas City cheerleaders were performing in the end zone when a cameraman came barreling across the field and knocked a cheerleader over with a pretty big hit.

Forget Patrick Mahomes. How about the Chiefs provide some protection for their cheerleaders? As a matter of fact, let’s just instruct the back-up offensive linemen to sit in front of them when they’re doing their routine — you know, just in case any overeager cameraman decides they want to wreak havoc that day.

Seriously, that was a pretty brutal blindside hit. It looked like she was okay and even continued to dance, but she’ll probably feel that one in the morning.

What was he trying to capture on camera anyway? The game was obviously stopped. Maybe he was trying to record their sweet moves and didn’t realize that objects may be closer than they appear through his lens.

This post was originally published on September 17, 2017, but was too funny not to bring back.

READ MORE: How Much Money Do NFL Cheerleaders Actually Make?