Patrick Mahomes is one of the NFL's brightest stars, and was born to be an athlete. The Kansas City Chiefs quarterback is the son of former Mets pitcher Pat Mahomes and has turned himself into a NFL MVP, Super Bowl MVP and the greatest quarterback in the league.

The bloodlines are undeniable. Pat and Randi Mahomes produced a 6-foot-3 cannon-armed son who, at 26 years old, is already looking like a Hall-of-Fame lock as the Chiefs made back-to-back Super Bowls, with the AFC star under center.

Patrick isn't their only son, though. Jackson Mahomes is Patrick's younger brother who towers over him at 6-foot-6 and is a social media star with hundreds of thousands of followers.

He also is the target of tons of online hate. 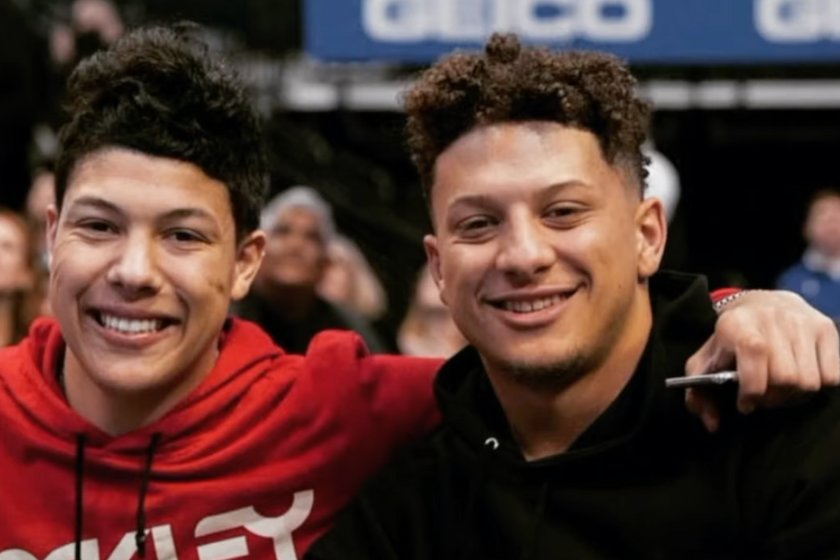 He's a marketing student at the University of Missouri-Kansas City, according to a YouTube video of his, but when he's not studying he can be found on the sidelines making TikTok videos. It doesn't matter if it's the preseason or midway through the NFL season, NFL fans can find Jackson grooving. Seriously, whether its against the Cincinnati Bengals, Tampa Bay Buccaneers, Arizona Cardinals and Los Angeles Rams or Chargers, Jackson Mahomes is looking to make NFL History as the first TikTok star to ever "Rudy" himself into an NFL game.

While his brother has carved out a career on the gridiron, the 6-foot-6 Jackson has garnered quite the following on social media himself.

Most notably, Jackson has nearly one million followers on TikTok, an app where he posts a whole lot of videos of him dancing. The younger Mahomes brother, influencer and Youtuber also has 254,000 followers on Instagram and another 33,000 on Twitter.

The TikTok star and college student recently released his own merchandise line and often sports his hoodies that have phrases like "Unathletic" and "Jackson From Tik Tok."

Jackson Defends Himself From Hateful Comments About Sexuality

I really ENCOURAGE my haters to talk, throwing that shade is only keeping me LITTT

Scroll through Jackson's videos on TikTok or pictures on Instagram and you'll find that he receives tons of hateful comments. After last season, Miami Dolphins wide receiver Tyreek Hill said that he wouldn't want to be handcuffed to Jackson for 24 hours, even if it meant a guaranteed Super Bowl ring. "That Super Bowl can... wait," the former Arrowhead speedster said.

But trolls have always been coming for Jackson.

People have flung anti-gay slurs at him such as calling him "Mahomo" or "Patrick's sister" despite zero evidence of him identifying as gay. In fact, he's posted videos of him saying he "needs a (girlfriend)" and a few of him that appear to be in a relationship with a girl. He also asked to take TikTok star Nessa Barrett on a date in a duet.

He even said in a YouTube video that he is "not gay" and is "attracted to girls," not that it's anyone's business except his.

Jackson has spoke about the hate he gets in one trending video of him in tears.

"All of the hate that I receive really affects me. I honestly really struggle with it and am trying to stay strong, but it's become too much," he wrote.

all of the hate that I receive really affects me. I honestly really struggle with it and am trying to stay strong, but it?s become too much.

While Jackson is more of a dancer than an athlete these days, that doesn't mean he never played sports. He played varsity basketball at Whitehouse High School, the same school Patrick became a star athlete at.

Fans at his games used to scream "you're not Patrick!" According to his coach, he was pretty darn good as a basketball player.

"He's had to work his tail off to get where he's at," coach Brent Kelley told East Texas Sports Network. "As an eighth grader when I first got here, he wasn't near the player he is today. He is a straight basketball kid. To see him go through that process and improve each year, being a full-time starter as a junior, it's been cool to watch him go through that, mature and live up to that last name."

Jackson graduated in 2018 but not before putting together some sick highlights of his playing days. Not bad for someone related to an MLB pitcher and NFL quarterback.

More recently, he's posted videos of him dunking and shooting basketballs. Judging from his height alone, he probably could've hooped at the next level (and, who knows, maybe the NBA) if he wanted to.

Jackson may be five years younger than his older brother, but the two are still very close.

They fought often -- and hard -- growing up. Their mom, Randi Martin, told East Texas Sports Network that she had to replace numerous items from their fights. They even once broke an oven.

"What kid breaks an oven?" she said. "I mean, shatters an oven. I never would buy new stuff before Patrick moved out because I was like, 'They're gonna break it.'"

As a 21-year-old, Jackson attends virtually all of his brother's football games. He's called Patrick's fiancée Brittany Matthews his "best friend" and has a blast with her whether it's in the offseason, regular season or playoffs.

Jackson and his NFL star quarterback brother have even starred in a commercial together for State Farm insurance.

Kansas City Chiefs quarterback Patrick Mahomes will be scoring touchdowns in the league for years to come. Jackson Mahomes will keep posting TikTok videos and growing his social media platform. Though they have different interests, their bond seems be strong as ever.

Jackson Mahomes Under Fire For Dancing on Sean Taylor's Number

Jackson Mahomes was seen here dancing on the Sean Taylor ?21? logo which was chained off to begin with.

This should infuriate everyone, this is disgraceful. pic.twitter.com/7puweqqOuM

As the Washington Football Team took on the Chiefs at FedEx Field in October 2021, the Internet went after the younger Mahomes.

The social media star posted a TikTok dance of him grooving on former Washington safety Sean Taylor's memorial No. 21 logo. It didn't help that Washington was having a jersey retirement ceremony for the late Sean Taylor, who tragically passed away from a gun shot wound in 2007.

For me to even acknowledge Jackson Mahomes he must've done something irredeemably stupid like dancing on the memorial of a beloved player who died prematurely while his family was in attendance on the day they retired his number. I need apologies stat & not just from him. pic.twitter.com/Hw8b2RBVWX

Jackson Mahomes thought a TikTok Dance was more important than this: pic.twitter.com/9JsvxjerJo

After dancing on Taylor's jersey number before Sunday's game, which was painted on the visitors' sideline and chained off, Internet users criticized Mahomes for being tone deaf and disrespectful towards Taylor's family. He later apologized.

I want to sincerely apologize for accidentally being on the Sean Taylor #21 at FedEx Field. We were directed to stand in that area and I meant absolutely no disrespect to him or his family.

In fairness, other fans were seen inside the ropes during the game, too. WFT seemed to designate it as an area for VIPs.

The road was re-dedicated in front of porta-potties.

The sideline number tribute was in the area where VIPs stand.

The half-time ceremony involved no speeches or recognition.

The owner wore a hoodie to the pre-game meeting with family. pic.twitter.com/HeroBghuK8

Nonetheless, this isn't the first time Mahomes has caught flak for his interactions with opposing fans at a Chiefs game. He came under scrutiny in Week 2 when he threw water on Baltimore Ravens fans following Kansas City's Sunday night loss. Even though Mahomes repented his actions, it's probably best he reads the room before he makes headlines at ESPN.

Jackson Mahomes tried to use his clout to cancel a bar here in KC. This was their response ? pic.twitter.com/vW4SATQLHk

He also made headlines in December 2021 after a local Kansas City bar called SoT ripped him apart online. After Jackson wrote that the service was "terrible" and the bartenders are "so rude," the bar's social media account blasted him for his ego and doing things for "TikTok clout."

Maybe Jackson Mahomes should just stay off social media for a while.

MORE: Patrick Mahomes' Net Worth Makes Him the King of Kansas City