What Happened to Titans QB Jake Locker and Where is He Now? 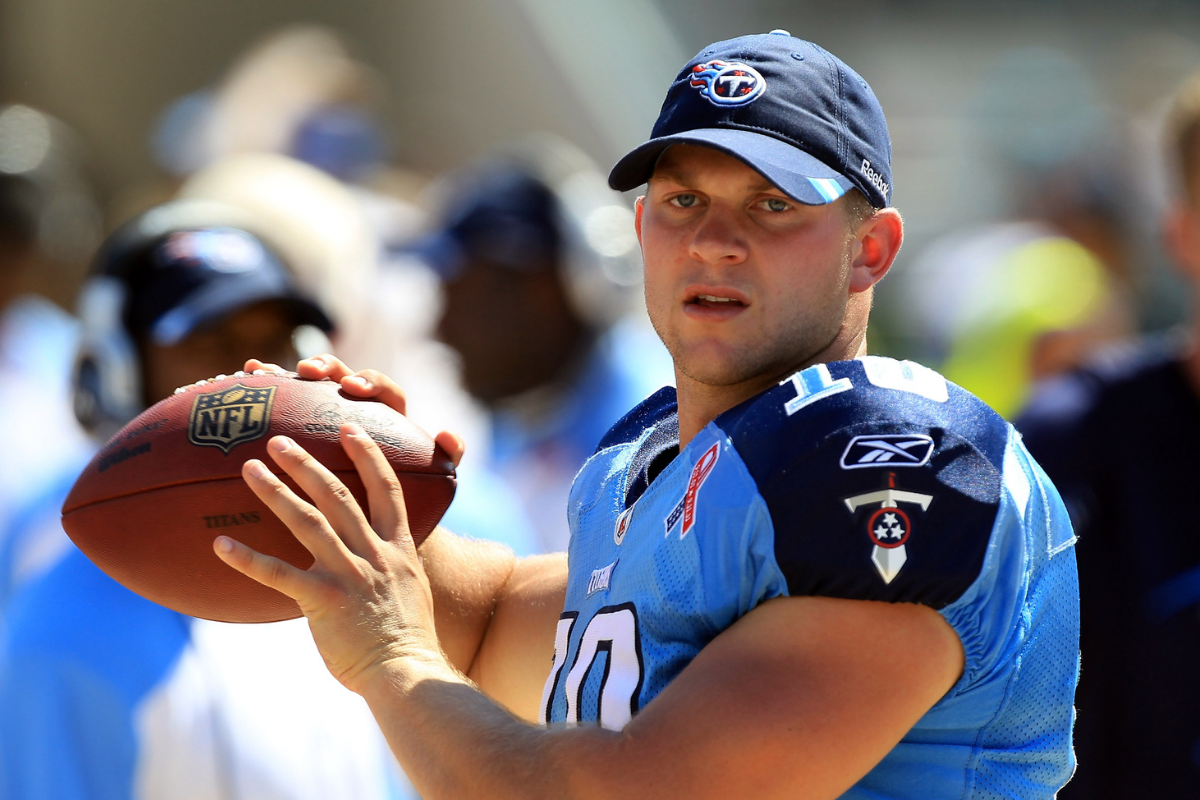 Former Tennessee Titans quarterback Jake Locker had some lofty expectations when he entered the NFL.

The Titans were hopeful their first-round draft pick could step in as the next franchise star and heir apparent to Matt Hasselbeck.

Well, Locker could never really find his footing and played just four seasons in the league before calling it quits.

So, what is Locker doing now?

RELATED: Zach Mettenberger Gave Up His Pro Dreams, But Where is He Now?

Jake Locker grew up in Ferndale, Washington, and attended Ferndale High School, where he helped lead the Golden Eagles to a state title. He stayed in-state for college and took his talents to the University of Washington.

With the Huskies, QB Jake Locker became a household name.

Locker threw 53 touchdowns and 35 interceptions throughout his college football career, and also recorded an additional 29 rushing touchdowns. The standout quarterback closed out his NCAA career with a Holiday Bowl victory over Nebraska.

He also played baseball during his time in college, both for the Huskies and the Bellingham Bells of the West Coast Collegiate Baseball League. The Los Angeles Angels even selected him in the 2006 MLB Draft and the 2009 MLB Draft, but Locker decided to stick with football.

Following his senior season in 2010, Locker left the program to pursue his dream of playing in the NFL. The Tennessee Titans selected Locker with the eighth-overall pick in the 2011 NFL Draft. Locker was the second quarterback off the board after Cam Newton.

Jake Locker had so much potential. Unfortunate that he couldn’t stay healthy. #TitanUp pic.twitter.com/3MRsRO1wHv

Locker’s rookie season as an NFL quarterback saw him serve as Matt Hasselbeck‘s backup. He threw a touchdown pass for the first time in a clash with the Atlanta Falcons, but saw limited opportunity throughout the season. Tennessee would finish second in the AFC South standings, just barely missing the playoffs.

However, Tennessee’s offense changed in 2012 when new head coach Ken Whisenhunt arrived. Shortly after the hire, Locker was named the starting quarterback for the 2012 season.

Locker started 11 games in 2012, throwing 10 touchdowns and 11 interceptions. He started seven games in 2013, but ended the season on injured reserve after sustaining a Lisfranc injury in a game against the Jacksonville Jaguars.

His 2014 season had a similarly disappointing ending. The quarterback separated his shoulder in a December matchup with the New York Jets and was forced to miss the remainder of the season. Pundits and fans began to wonder if this was the last year Locker would suit up in the NFL.

While Locker seemingly had the talent to continue playing in the league, the injuries had taken their toll. As a free agent in 2015, Locker was sought after by various NFL teams, including the Philadelphia Eagles and Indianapolis Colts. However, when Hasselbeck, then with the Colts, gave Locker a call to gauge his interest in making a comeback, Locker shut him down.

He reportedly stated he had a softball game that weekend.

Locker last played in the NFL in 2014, and he officially retired in 2015 without a playoff game on his resume. Four years after being selected in the NFL draft, Locker?s career as a professional football player was done.

Locker’s father, Scott, told The Seattle Times in 2015 that Jake’s desire to focus on life with his family was the reason for his retirement.

Kudos to Jake Locker. When u lose passion for game – walk away. Good luck to u and your family pic.twitter.com/PLxv38v0PW

Locker resides in his hometown of Ferndale with his family, including his wife Lauren Greer and their four children: daughter Colbie, and sons Cooper, Colt, and Cade.

In Ferndale, Locker is a coach for the high school football team and co-owns a gym with former Buccaneers kicker Michael Koenen called “Locker Room Fitness” — a very fitting name for a Jake Locker-owned fitness establishment.

Locker has no regrets over his decision to retire early. Despite being just 26 when he last featured in an NFL game, the former standout quarterback told Sports Illustrated’s Greg Bishop that he made the right choice.

He reportedly said that he still would have opted for retirement even if he’d spent his NFL career winning multiple Super Bowls as a member of the New England Patriots.

This article was originally published on June 6, 2021.

MORE: Texans RB Arian Foster Retired at 30, But Where is He Now?