Eric Decker and his wife Jessie James Decker are one of those couples you see on Instagram, the cover of magazines and in commercials. They even starred in three seasons of their own show on E!, "Eric & Jessie: Game On." Simply put, the former NFL wide receiver and the country music singer are beautiful people.

They're also a pretty accomplished pair. Eric was a wide receiver in the NFL for the Denver Broncos, New York Jets, Tennessee Titans and New England Patriots for eight years. He posted three 1,000-yard seasons, caught 53 touchdowns and played in a Super Bowl.

As for Jessie James Decker, she's a country singer, reality TV star and fashion designer. The country star is signed to Warner Music Group's Atlantic Records and has recorded three albums. The 32-year-old mother of three children has had seven songs peak inside the Billboard Hot 100, including "Lights Down Low" (No. 15, 2015) and "Flip My Hair" (No. 23, 2018).

The Deckers continue to be one of social media's hottest couples (though they might not have the celeb status that Carrie Underwood and Tony Romo did) even after welcoming two boys and a girl into the world. Judging from their Instagram profiles, they know how to keep things spicy as well. 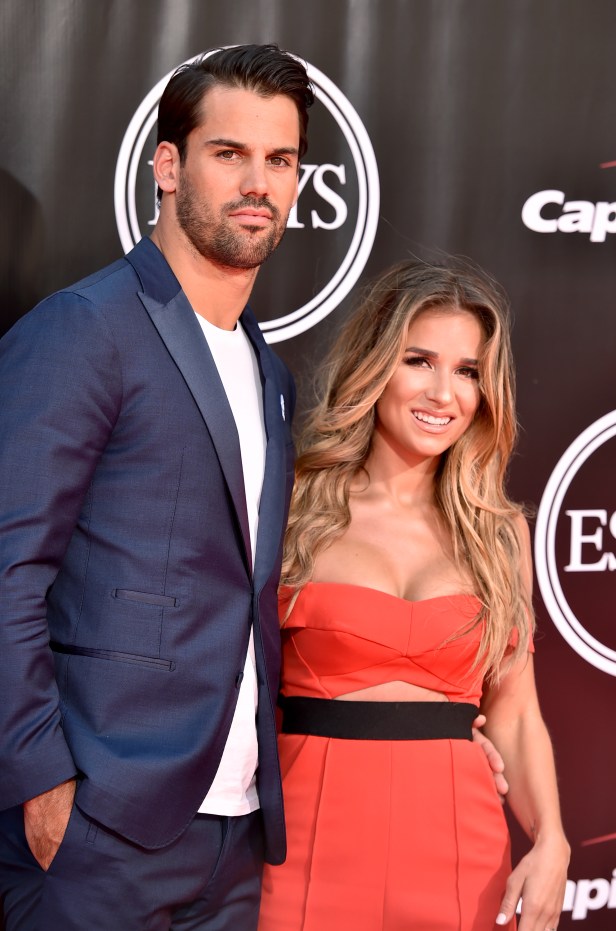 Eric Decker was playing for Denver when he was introduced to his future wife by a mutual friend. But like most relationships in today's age, they began talking online first.

"He was in Arizona training, and I got a text from my girlfriend who said, 'I'm having dinner with this guy I'm seeing, and this other guy just showed up, and he's stunning,'" Jessie James Decker told Bustle.

"Show him a picture of me, and see if he's into it," she told her friend.

That worked like a charm. They texted and called each other before he finally flew out to Nashville, where she lived, to meet in-person. They've been together since 2011 and got married in 2013.

Unsurprisingly, their kids are every bit as adorable as they are.

Jessie posts photos of her children often on Instagram, and she's even had to defend herself for wearing some skimpy underwear around her little ones in the comfort of her own home.

When one commenter questioned how she dressed (or didn't), she responded promptly by saying, "No different than a swim suit. I teach my children the body is beautiful. Nothing to be ashamed of."

Jessie James Decker Has a "No Clothes Rule"

It's true. The woman who has done weight loss photoshoots for the South Beach Diet and posted plenty of selfies in bikinis, workout clothes and red carpet attire isn't a fan of clothes on her or hubby.

Don't worry, though, apparently the pants stay on when the kids are around.

"When I'm at home, there's no rules at home," Eric chimed in before his wife added that the two are "hillbillies at home."

If everyone looked as tanned and as toned as the Deckers do, I'm sure they'd have similar rules in place. Unfortunately, that isn't the case.

Jessie is such a fan of her husband's body that she posted a pretty NSFW Instagram post of him with nothing but a towel covering his, uh, man parts. Oh, yeah, and she also put her husband in leotard for the "flip the switch" Tiktok challenge that gained steam during the coronavirus pandemic.

Eric apparently had no clue that "Jessie James Decker Shares Nude Photo of Husband Eric Decker" would become a real-life headline, but he apparently didn't give her too much trouble for it.

"He didn't know about it until about three hours later, when he looked at Instagram," she told US Weekly. "He's like, 'Really? Ya did that?' I was like, 'Yeah, you just looked so good and I just thought I'd share it.' He's a trooper though."

Hats (and every article of clothing) off to a ridiculously attractive couple. Share some of that beauty with the rest of us.