This guy's Super Bowl is in the Las Vegas of the Midwest: Indianapolis. And watching a lineman run the three-cone drill is the closest thing to heaven as it gets.

The combine is the time for already established players to cement their stock or under the the radar players to break out.

In 2011, wide receiver Julio Jones showed scouts why he was one of the most electrifying players in his draft class.

Nearly ten years ago: Julio Jones destroyed the Combine on a fractured foot

RELATED: Julio Jones' Net Worth: How the NFL Star Hauled in Millions

The Foley High School grad was an absolute stud in his three-year college career under Alabama head coach Nick Saban, hauling in 2,653 receiving yards on 179 catches and 15 touchdowns.

His performance in Tuscaloosa placed him high in mock drafts along with Georgia receiver A.J. Green.

The Crimson Tide pass catcher arrived in Indianapolis to prove why he should be the draft class' top receiver.

Jones took expectations and shattered them. He proved he has the blazing speed of a running back, the ability to out-leap corners and the strength to break tackles after the catch.

Shortly after the scouting combine wrapped up, ESPN reported that Jones discovered he had a stress fracture in his foot two days before the event. He insisted on working out because he had no symptoms and had a screw inserted to repair the injury. He subsequently sat out Alabama's Pro Day to heal.

So Julio Jones has 4.3-speed on a broken foot. That's pretty good. I once walked 10-feet to the fridge for a beer in 4.2 seconds with a stubbed toe -- not to brag. His vertical jump is enough to do windmill dunks, too. We might be talking between-the-legs if that foot is healthy. 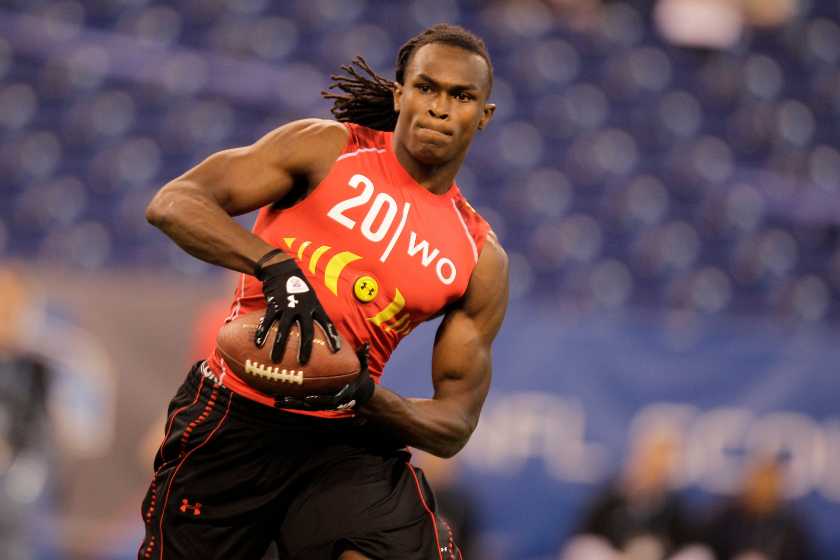 The Atlanta Falcons ended up selecting the Alabama wide receiver with the sixth-overall pick of the 2011 NFL Draft. He was the second pass catcher taken after Green was selected fourth by the Cincinnati Bengals. LSU cornerback Patrick Peterson was the fifth pick by the Arizona Cardinals.

Jones' combine performance was only a glimpse of what we would see in the NFL. The first-round pick cemented himself as one of the best receivers in the game during the first 10 years of his career in Atlanta, leading the league in receiving twice.

Jones' time in Atlanta came to and end after the 2020 season when he was traded to the Tennessee Titans. Although the 'Bama alum battled some injuries last year, the 33-year old will look to bounce back alongside Ryan Tannehill and A.J. Brown.

MORE: "Do You Like Tall Women?" A Look Into the Bizarre & Often Inappropriate NFL Combine Questions