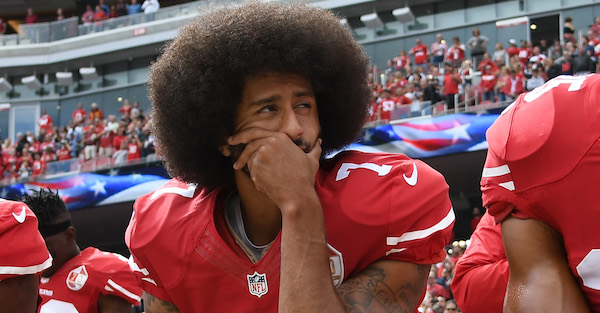 In response to national anthem protests, one bar in Missouri placed Colin Kaepernick and Marshawn Lynch’s jerseys as doormats. If that wasn’t bad enough, the arrangement has fans infuriated:

Lynch Kaepernick may have been just a coincidence, but it doesn’t excuse the message. Here’s what owner Jason Burle said, per The Root:

?It?s not a race thing,? Burle told KOMU-TV. ?A lot of people want to twist it around to be a race thing.

?We pulled them out of the box, taped them down. There was no ill intent,? he added. ?If someone thinks that I mean personal harm to someone, they don?t know me.?

Burle served six years in the Air Force and reportedly told KOMU-TV that he takes it personal since the bar was started to honor veterans. At the same time, he also recognized he fought for Kaepernick and Co.’s right to protest.

?The same thing that gives them that right gives me the right to place these out here,” he said.

He has since rearranged the jerseys to read Kaepernick Lynch.

In turn, NFL, NBA and MLB athletes have responded with either comments pushing back against the president or reactionary statements such as kneelingor staying in the locker room.