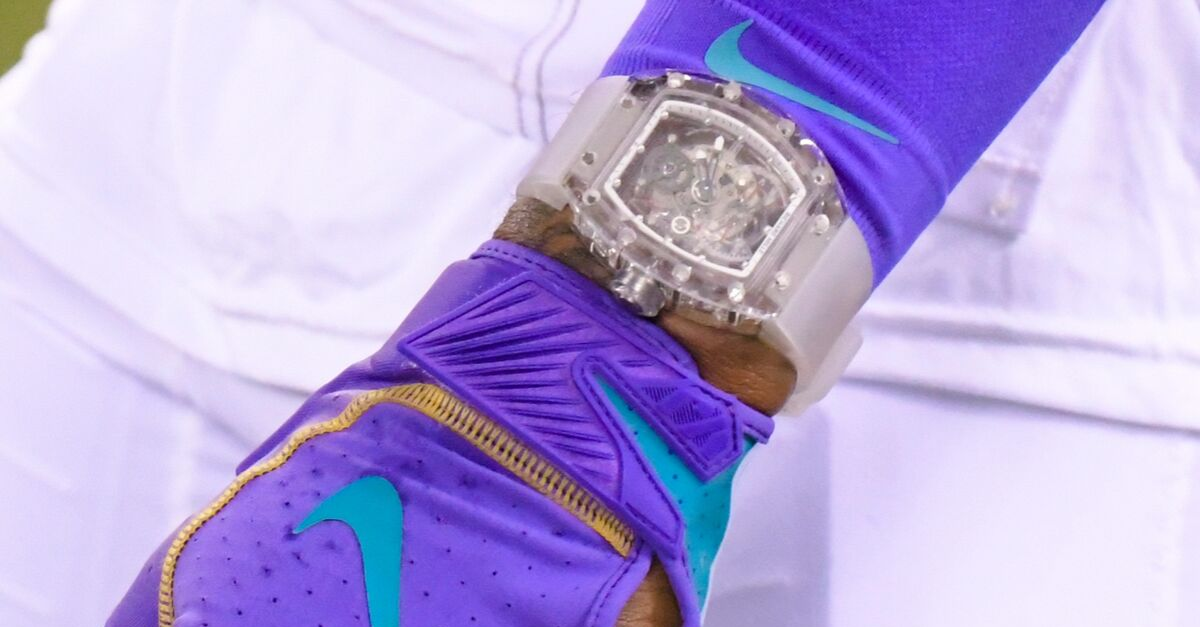 Whether it?s football or fashion, Cleveland Browns wide receiver Odell Beckham Jr. is used to standing out. He?s a flashy guy and wants the world to know it. So while this next trendy statement he makes on game days isn?t surprising, it sure gets a lot of attention around the NFL.

OBJ?s debut for the Dawg Pound was a disaster. Sure, he played well with seven catches for 71 yards, but the Browns got smoked at home by the Tennessee Titans. It wasn?t the Week 1 game anyone Cleveland thought.

At least Beckham Jr., who was traded to the struggling franchise from the New York Giants this past offseason, did his thing despite not catching a touchdown from quarterback Baker Mayfield.

You?ve seen football players wear chains before. But have you ever seen someone wear a $350,000 Richard Mille watch during an actual game? That?s what OBJ did.

Odell Beckham Jr. may end up donating a chunk of his next game check to the NFL, after wearing a $350,000 watch on the field during Sunday's game https://t.co/63D9j3yV5K

Talk about flashy. That expensive watch is a huge flex on the rest of the sports world.

What kind of watch watch was OBJ rocking in his Browns debut? It was a Richard Mille RM 11-03 McLaren Flyback Chronograph. The price is listed at $350,880 on Essential Watches of Beverly Hills.

Even though it has a simple, black rubber strap, the face on the wristwatch is worth more than most homes.

It?s unclear whether or not Beckham was in uniform violation with the fancy watch in his first game at FirstEnergy Stadium, but this is harmless compared to the Antonio Brown saga that just transpired this offseason or the horrific performance by the Miami Dolphins to start the NFL season.

For football fans thinking Odell Beckham Jr. was going to get in a lot of trouble for wearing his expensive Richard Mille watch during the Cleveland Browns season opener, guess again. Yes, it violates the NFL’s rule prohibiting hard objects, but the superstar wide receiver doesn’t care.

Despite the NFL’s policy, OBJ said he plans to continue to wear his $350,000 Richard Mille watch on game days for the foreseeable future.

?I?m here to play football. I would love for them to talk about football and what I do on the field, if I messed up on the field or if I didn?t do well on the field, talk about my performance,? he said, via The Associated Press. ?Don?t talk about any extracurricular, that?s just it. If anybody else would?ve worn the watch, or if it was a $20 watch, it wouldn?t have been no problem.?

Odell Beckham Jr. took the field Sunday wearing a Richard Mille watch worth around $350,000, breaking the NFL’s rule prohibiting hard objects. @SInowLIVE wonders what would prompt OBJ to wear an accessory on the field that’s worth more than some people’s houses pic.twitter.com/z3mDQMrahH

Will Odell Beckham Jr. wear the watch again? Only time will tell.

?It shouldn?t be an issue,? he added. ?You?ve got to look into the rulebook. It says you can?t wear any hard objects. The watch is plastic. But people have knee braces on that are hard and made out of metal and you don?t see them taping it up, no jewelry on, so I?m good.?

OBJ heard all the talk about his watch so he stepped up his game. This one is worth $2M 😳 pic.twitter.com/4GJsT5ygJu

Although the superstar wide receiver didn’t wear a watch during the Browns’ Monday Night Football win over the New York Jets at MetLife Stadium, a game where he caught six passes for 161 yards and a touchdown, OBJ decided to make his loud fashion statement during warmups.

Forget the timepiece he wore for the Browns opener, Beckham’s return to the Big Apple featured a Richard Mille RM 56-02 Tourbillon Sapphire during warmups that has a value of $2 million.

Yeah, that watch is incredible. So what will he wear next week? It definitely won’t be something as practical as this, though.

READ MORE: Odell Beckham Jr.?s Net Worth is More Impressive Than His Catches