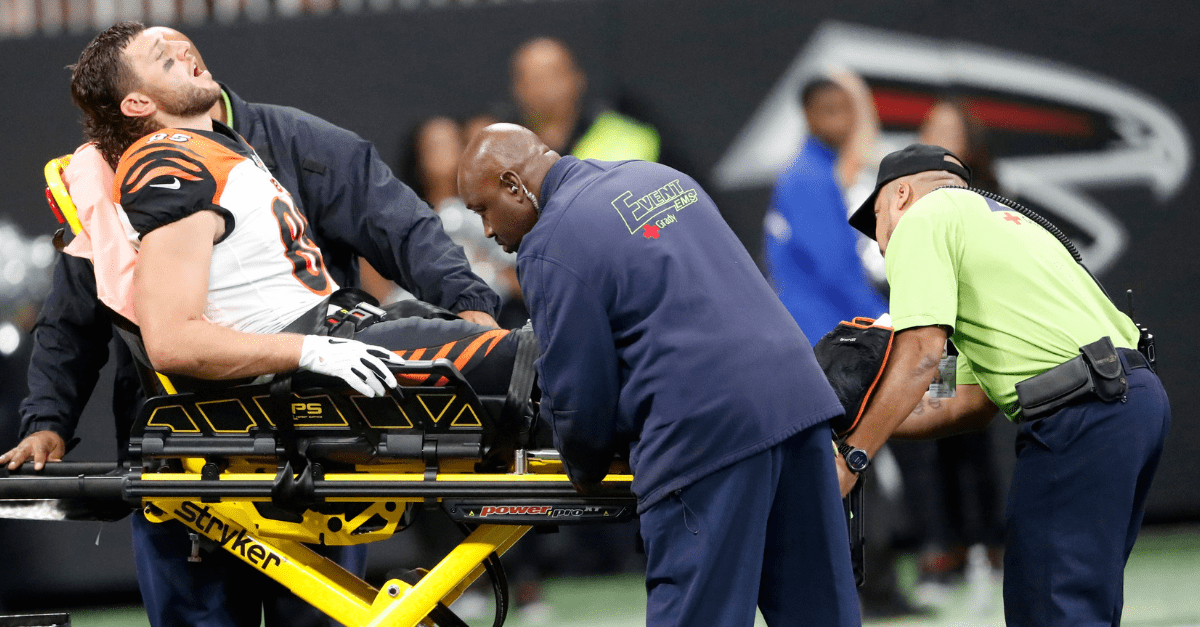 The National Football League is a physically punishing place to work. Some players fighting for long-term contracts can be hurt in an instant, and others battling back from injuries just can’t seem to stay healthy long enough to make an impact.

Cincinnati Bengals tight end Tyler Eifert has all the tools and talent to be a top-tier target in the league, but injuries have kept him from reaching his full potential. During Sunday’s game against the Atlanta Falcons, the sixth-year pro caught a short pass, but when he was tackled, he emerged with a gruesome injury that will have you glad you don’t catch footballs for a living.

Early in the third quarter of Cincinnati’s thrilling 37-36 win over the Falcons, the 28-year-old tight end collected a short throw and turned up field.

Dragging Eifert down from behind was Atlanta’s De’Vondre Campbell, who rolled over the tight end’s lower leg.

When the dust settled, Eifert lay on the field writhing in pain, and his right ankle was facing a direction it typically isn’t supposed to face.

Tyler Eifert injury. This is tough to watch. pic.twitter.com/HTPsRIWqpj

Take a second and thank your feet for staying in the right direction.

The former first-round pick out of Notre Dame was returning to form with 15 catches to start the 2018 year, and grabbing his first touchdown pass in two years earlier in this game, but it’s back to the all-too-familiar drawing board once again.

In 2014, Eifert dislocated his elbow in the first game and missed the remainder of the season. After catching 13 touchdowns in 2015, he suffered an ankle injury during the Pro Bowl that kept him out of action until the midway point of the following season. Then, Eifert began having back issues that sidelined him at the end of 2016, which extended into him missing almost all of 2017.

Eifert’s 2018 year is over after undergoing immediate season-ending surgery to correct his broken ankle, and it’ll be another year of rehabilitation for the sixth-year pro.

I never take the field with thoughts of intentionally hurting anyone I just try to do my job to the best of my ability. Praying for a speedy recovery @tylereifert 🙏🏿 I appreciate the opportunity to compete against you

Eifert’s one-year deal with the Bengals is up, and he’ll return in 2019 looking for a new home if Cincinnati chooses to move on from the injury-riddled tight end.

For 6-foot-6 and 255 pound pass catcher, an NFL team will take the chance on Eifert next season, but it’s his health, not his skill level, that will determine how much of an impact he can make.