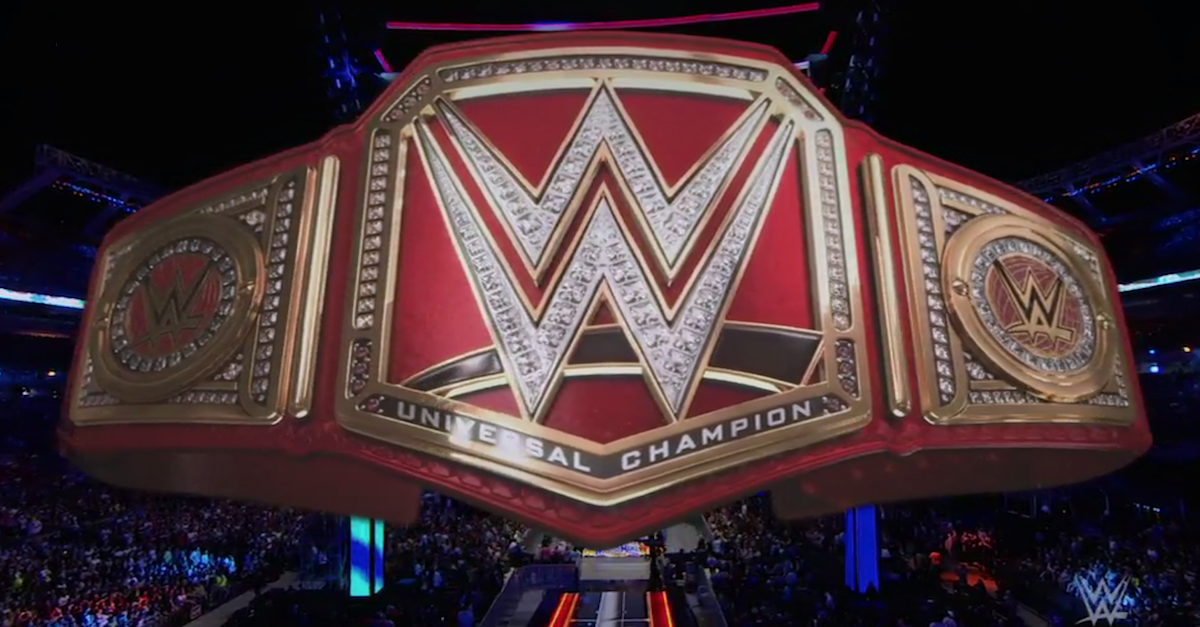 The 2018 Elimination Chamber was broadcast live on February 25, 2018, at T-Mobile Arena in the Las Vegas Valley in Paradise, Nevada.

They billed this as the “biggest” Chamber match in history, which is technically true… but weird to mention that over the PA before the match and not, you know… winner goes on to face Brock Lesnar at WrestleMania.

Anways, Balor, Rollins, and Miz were the first three in the ring for the match. Miz tried to get both Rollins then Balor to team up with him against the other, but Rollins and Balor decided to attack Miz in unison instead.

The battle eventually broke down into a true three-way when John Cena finally entered the Chamber. Cena ran wild for a bit and we eventually got to a spot where Cena hit a superplex on Balor while Rollins was simultaneously hitting a superplex on Miz in the other corner. Cool spot.

Reigns was in next… he got booed heavily. What he did was less important than what happened next…

Strowman was in next and he probably had the best spot in the entire match. The Miz was trying to avoid Strowman, even climbing to the top of a pod to try and escape. However, Strowman simply climbed after Miz, and after banging The Miz into the glass a couple of times, Strowman threw him off the pod onto everyone else in the match.

It wasn’t long afterwards that Strowman hit a powerslam and made Miz the first elimination of the match. Elias was in next while everyone else tried to gang up on Strowman… it didn’t work, as Strowman kicked out after being hit with three separate finishers.

After about five minutes of shenanigans, Elias eventually went after Strowman… it wasn’t very effective. Strowman eventually hit him with a powerslam and eliminated Elias from the match. Not long after, everyone tried ganging up on Strowman again, including Cena trying a move off the top rope. Instead, Cena was caught and hit with a powerslam. CENA IS ELIMINATED, leaving Strowman, Balor, Rollins, and Reigns.

Things then got interesting as Balor and Strowman went at it, with Balor hitting the Coup de Gras to the back of Strowman’s neck for a long two count. Things broke down after that as Rollins and Reigns got involved, and there was even a point where it looked like Balor had a pin on Reigns after hitting another Coup de Gras. However, Strowman swooped in to grab Balor, powerslam him, and earn his FOURTH elimination of the match.

Reigns and Rollins, despite some fighting between them, essentially teamed up to try and eliminate Strowman. Didn’t work, event with Rollins trying a frog splash from all the way off the top of one of the pods. After going for a stomp later, Strowman caught Rollins out of midair, hit the powerslam and got his fifth pin of the match.

Now down to Reigns and Strowman…. Reigns got Strowman on the outside and eventually tricked Strowman into crashing through one of the pod doors. After a couple of superman punches, Strowman fell into the ring… after MORE superman punches and TWO spears, Strowman finally fell and Reigns won the match.

BUT BRAUN WASN’T FINISHED YET. In his post match celebration, Strowman hit Reigns with two powerslams AND he threw Reigns through one of the pod doors…

Where does Strowman go from here?

Bayley and Sonya Deville were the first two competitors in the match. Bayley had the upperhand early, and the crowd was actually really behind her. However, Bayley’s hot streak didn’t last long, as Mandy Rose was the the first one released from the pods and Absolution was able to fully team up against Bayley. The two had Bayley strung up in the cage when Sasha Banks enters the match! Banks was absolutely on fire, completely taking it to Rose and Deville. Just when it looked like Rose had started to recover, Banks hit the backstabber and the Banks Statement to force Rose to tap out.

Next we got a little bit of craziness: Mickie James was the next woman in, and she immediately went after everyone, regardless of allegiances. James even provided us with the first “holy s**t” moment of the match, jumping off the top of the pod to eliminate Deville.

Unfortunately, James didn’t last very long after that, as Bayley hit the Bayley-to-Belly suplex to get the pin on James. This left Alexa Bliss all alone in the Chamber to battle Bayley and Banks, and the two teammed up to corner Bliss on top of one of the pods. However, this is where Banks finally turned on Bayley, knocking the hugging superstar off the top of the pod to send a message.

The match eventually came down to a critical spot, where Bayley hit her Bayley-to-Belly suplex on Sasha off the middle rope. Instead of getting the pin, though, Bliss ran in and got the rollup on Bayley to score the elimination. This left just Bliss and Banks, and things quickly got brutal as Bliss hit the Twisted Bliss off the top of the pod onto Banks outside of the ring. However, Banks reversed it into the Banks statement, and was able to get the submission into the ring. Bliss got out of the submission though, and was eventually able to hit a DDT off the middle rope to get the pin.

Alexa Bliss retains her title, and appears to be heading into WrestleMania 34 as the champion.

Ronda Rousey was at WWE’s Elimination Chamber show on Sunday night, with the expectation that she would publicly sign a WWE contract.

That situation quickly escalated, though, as Rousey was given more than a contract: she was given a match at WrestleMania 34 in New Orleans… something that Rousey didn’t expect, apparently. (storyline, guys!)

Sensing that something was up, Rousey asked those in the ring — Triple H, Stephanie McMahon, and Kurt Angle — what was up and Angle spilled the beans: that Triple H and Stephanie had brought her to WWE to manipulate her.

After a war of words and some stare-downs, Rousey put Triple H through a table and scared off Stephanie right before she signed her official contract.

.@RondaRousey just did THAT. pic.twitter.com/lD9wxK0KrR

Rousey vs. Stephanie at WrestleMania? Or Rousey and Angle vs. Stephanie and Triple H? Either option is fun, and it will be nice to finally get a look at how Rousey does in a WWE ring.

Coming off the women’s chamber match, the crowd was a little dead for this match. Otherwise the match was technically fine, and Apollo was able to again show off some of his athleticism. That athleticism didn’t help much against the cold, calculated tactics of Sheamus and Cesaro. After a chop block to the knee, The Bar had Apollo grounded and they were able to get the pin after a springboard combination.

The story around this one was that Jax would be added to the WrestleMania title match if she were able to defeat Asuka and Asuka’s 800+ days of being undefeated as a singles competitor in WWE.

Fans were clearly anxious that Asuka’s streak could end here at the hands of Jax, but they were not let down as Asuka was able to get the pin. That said, the bigger story here is that Jax completely destroyed Asuka following the match, including sending the Royal Rumble winner through the ringside barricades.

Asuka got the win, but it looks like Jax was able to inflict some damage before WrestleMania.

The story of this match was that… well, it wasn’t that good. This feud between Bray and Woken Matt over who can laugh the weirdest has gone on forever, and the crowd showed their apathy by doing the wave, playing with beach balls and chanting for Rusev Day.

You know, all the things you really don’t want happening in a match.

Hardy got the win after a Twist of Fate, but man, both guys really came off looking worse here.

Probably the most notable thing about this match was that they cut away to commercial mid-match to show… an ad for the Elimination Chamber show. Like, we are already here, you don’t need to interrupt the match for a commercial!

Anyways, Anderson and Gallows got the much needed win here, hitting the Magic Killer for the pin. However, the bigger question here is this: do Dallas and Axel make an appearance later for the men’s Chamber match to help out The Miz?