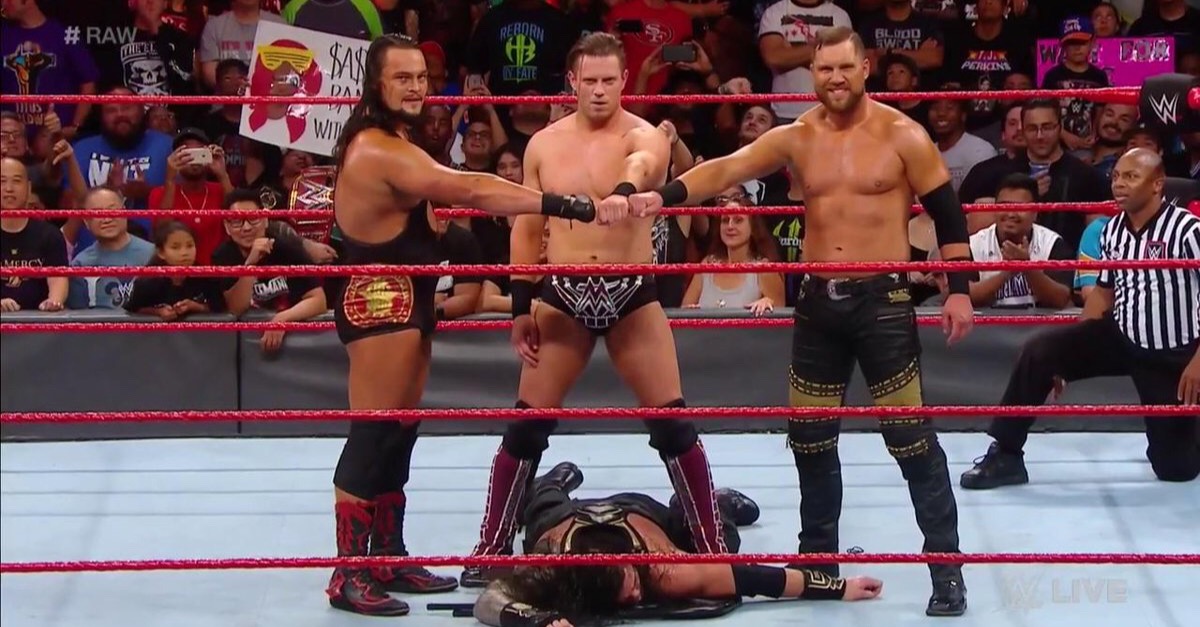 Amore cut a promo on dealing with scrutiny and adversity. He said people were jealous, just like his former tag team partner Big Cass, calling his knee feeble. He said he has mainstream power just like John Cena, The Rock and Batista. He put his Certified G jersey in a case and said it should be retired.

He said he made 205 Live relevant because he?s Smacktalker Skywalker. The Cruiserweight division hit the ramp and looked down Amore.

He called Swann a nobody, said Cedric Alexander doesn?t have charisma, said Gran Metalik isn?t under 205 pounds with his gut. Neville then came out as well looking like a zombie. Amore said Neville wasn?t a real man.

Neville said Amore alienated everyone and he was put on 205 Live because no one else would have him. Amore said he repaid everyone by getting eyes on 205 Live and making them stars. Neville walked down the ramp and Amore said he had a no-contact clause signed by Kurt Angle.

He said the reason they?re out in the main event is because he?s a star. Neville attacked Amore and threw him head-first into the frame. He then threw him into the barricade, then another barricade. Amore tried to leave up the ramp, and the Cruiserweight division stalked him back to the ring.

There is NOWHERE to go and NO PLACE to hide for @real1! #RAW #205Live pic.twitter.com/3oSQQMyqrI

Neville super kicked Amore in the face, then hit the Red Arrow before Raw went off the air.

Jax went after Bayley?s shoulder, then set her up for the samoan drop. Banks made the save and Jax took both of them out. Emma took it to Bayley before she made the hot tag to Banks.

Banks worked over Emma before tagging in Bayley, who hit the Bayley 2 Belly for the win.

Miz shook hands with Reigns to start the match. He tried to walk off and Reigns pulled him back. Miz worked Reigns over, but the former champ reversed the Skull Crushing Finale into the spear for the win.

After the match, the Miztourage attacked Reigns and set him up for the Skull Crushing Finale. Reigns fought out and set Miz up for a powerbomb.

Miz and the Miztourage taunted over Reigns with the Shield celebration.

Rollins hit the Kingslayer for the pinfall over Sheamus.

Strowman attacked Curt Hawkins before their match could even start, throwing him through a table. Dean Ambrose came down and answered Strowman?s challenge.

Strowman manhandled Ambrose for most of the match. Ambrose tried to hit his diving elbow drop, and Strowman caught him before hittin the powerslam for the win.

Before the match, WWE showed clips of Jeff Hardy injuring his shoulder. He?ll be out for significant time, leaving Matt Hardy to team with Jason Jordan.

Matt hit the Twist of Fate for the pinfall on Dallas.