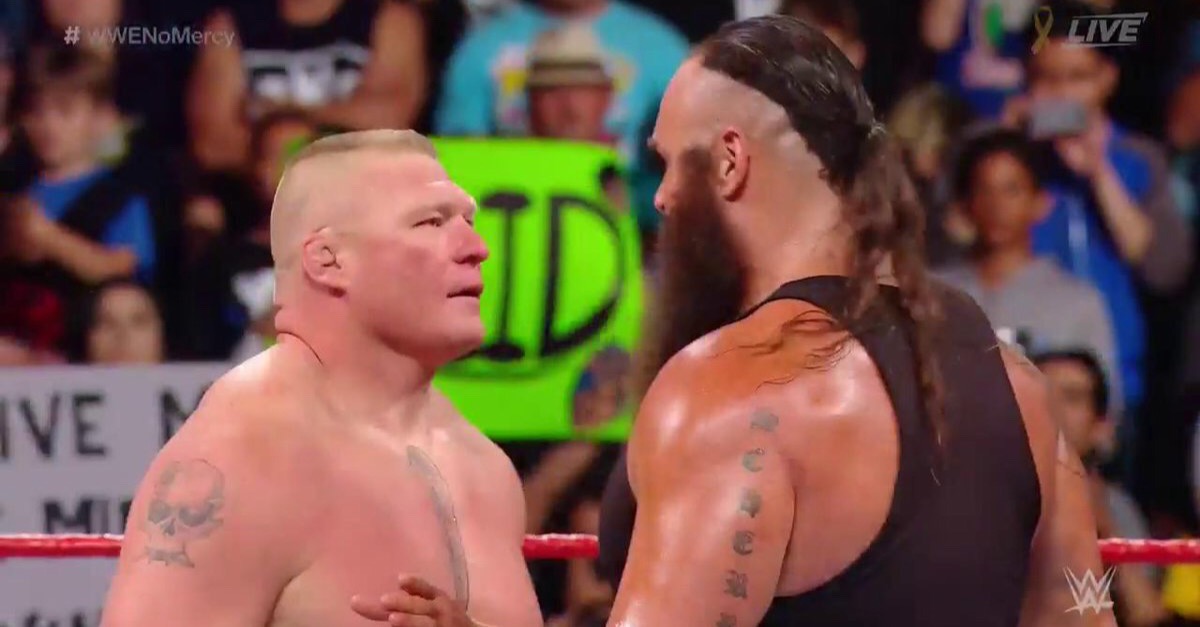 WWE No Mercy broadcast live from the Staples Center in Los Angeles, California on the WWE Network at 8 p.m. ET.

Strowman threw Lesnar across the ring to open the match. Lesnar hit a german suplex, but Strowman got back up and hit a chokeslam. Strowman followed it up with the running powerslam for the two-count.

Strowman picked Lesnar up and ran him from corner to corner. Lesnar tried to lock in the Kimura, but Strowman made it to the rope. Back on their feet, Lesnar hit a german suplex, then a second, then a third, a fourth and a fifth.

He then picked Strowman up for the F-5, but Strowman reversed and hit two consecutive running powerslams. Lesnar kicked out at two.

Lesnar got Strowman up and hit the F-5 for the win.

Neville beat Amore around the ring. He knocked him to the outside and sat on the top rope as the ref counted to nine before Amore got back in the ring.

Amore hit Neville with the low blow and got the rollup for the win.

Fans chanted that both guys suck, and Cena left the ring to head back up the ramp.

Reigns attacked him from behind and threw him into the ring. Reigns controlled the match early, throwing Cena into the stairs and hitting the Driveby on the outside.

Back in the ring, Cena hit the body drop and set up for the 5 Knuckle Shuffle, but Reigns reversed into the samoan drop. Reigns locked up for the Superman Punch, but was reversed into the STF. Reigns escaped and hit a lifting powerbomb. Cena caught a diving Reigns and flipped him into the Attitude Adjusment for the two-count.

Cena attempted a diving leg drop, and Reigns reversed into a powerbomb for the two-count. Reigns connected on the Superman Punch, and followed it up with attempting the spear, but Cena evaded and he hit the corner. Cena lifted Reigns onto the top rope and connected on the diving AA off the rope, only for Reigns to kick out at two.

Cena winked at the camera and tore apart the Spanish and German announcer?s table. Cena put Reigns in position to hit the AA onto another table, but Reigns reversed and speared Cena through the table.

Back in the ring, Reigns tried for the spear, but Cena reversed into the AA, rolled into another AA and stil only got the two-count. Reigns made his way to his feet, hit the Superman punch, then finished Cena with the spear for the win.

After the match, Cena lifted Reigns? hand and they showed off to the crowd. Cena and Reigns hugged it out after the match.

Jax hit a double samoan drop on Bliss and Banks for the two-count.

Jax took a brutal looking powerbomb to the outside from the other four competitors.

Sasha Banks locked in the Banks Statement on Bliss, but it was broken up Bayley hit the Bayley 2 Belly for the two-counting Bliss as well. Bliss threw Bayley into Emma, then hit her DDT on Bayley for the win.

Cesaro caught Rollins on the top rope as Sheamus hit White Noise on Ambrose. Cesaro followed it up with a powerbomb off the top rope of Rollins onto Ambrose for the two-count.

Related: Cesaro was left a bloody mess at WWE No Mercy

Ambrose suckered Sheamus in for the rollup by hitting the mat before the champ could connect on the Brogue Kick for the two-count. Rollins hit the Kingslayer knee strike into the Dirty Deeds by Ambrose for the win.

Wyatt attacked Balor while he was making his entrance. Balor was being helped to the back by referees when Wyatt called him a coward. Balor reacted by tearing his jacket off and running back to the ring.

Balor took it to Wyatt around the ring before beating him down back in the ring. Balor hit a running dropkick into the turnbuckle, then landed the the Kudagra for the win.

Jordan had Miz on the ropes late, hitting the rolling Northern Light suplexes. Bo Dallas climbed to the top rope to distract Jordan and the challenger knocked him into the ring. Jordan rolled up Miz as the ref was distracted. Miz escaped, Jordan got up and fell forward into Axel. He fell backwards into the Skull Crushing Finale for the pin.

Elias hit the Drift Away on Crews for the pinfall. After the match, he attacked Crews. Titus made the save and chased him off.

Monday Night Raw results leading up to No Mercy