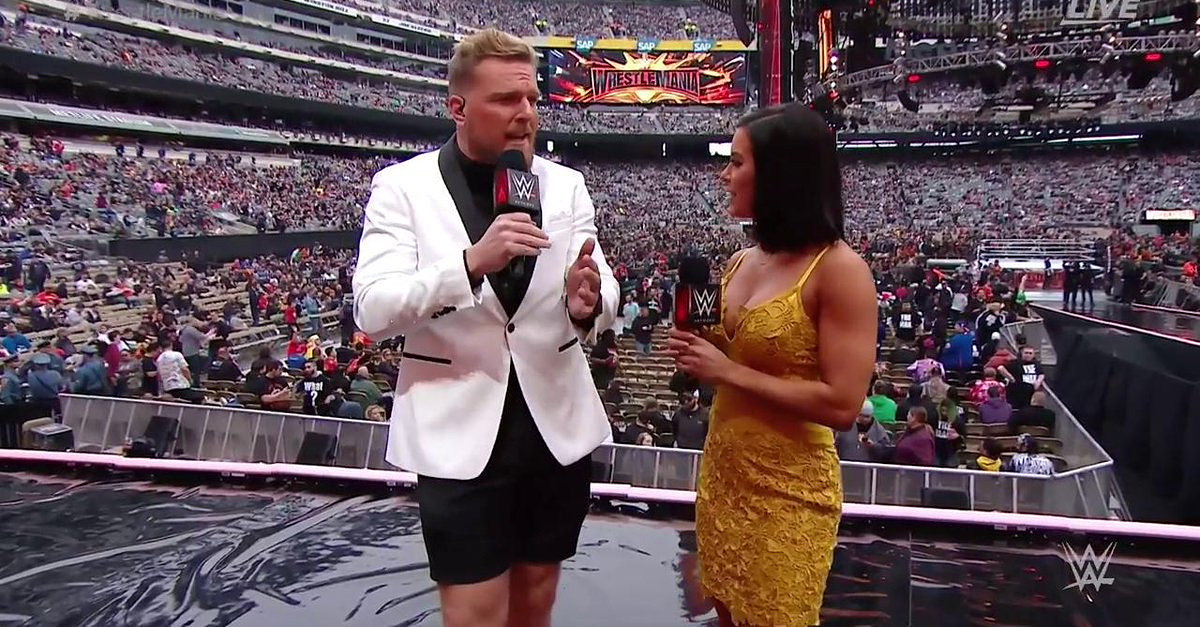 On top of being the most exhilarating time of the year, WrestleMania can also be the most stressful. The pressure is on not only for the competitors, but for also the backstage personnel. Unfortunately, for former Indianapolis Colts punter Pat McAfee, he experienced this firsthand during WrestleMania 35 as a member of the WWE roster.

According to the Wrestling Observer Newsletter, McAfee got into an altercation with Michael Cole over what Cole thought was a wardrobe violation. McAfee, who announced in December 2018 that he was offered a WWE contract, was on stage with the WrestleMania pre-show broadcast team. McAfee was told that no jorts were allowed to be worn. McAfee came out with tuxedo pants that were cut into short suit pants, and this caused Cole ? who is in charge of announcers ? to yell at him because he thought he looked unprofessional for the kickoff show.

“So I looked at Michael Cole and I said, ?They?re tuxedo shorts, man.? And he said, ?I can?t – you look terrible!?” McAfee said on his podcast. “He was like yelling, real – this wasn?t like a rib or a gimmick, you could tell there was actual panic.

McAfee, enraged at this altercation, nearly quit what he considers a “second job” due to Cole’s actions. He came so close to quitting that he was in his dressing room and starting packing him bags to leave. Someone saw McAfee packing before the show, and he informed the person that he was leaving and that he is “not getting punked and yelled like a child in front of that.”

Business on top
Party on the bottom.

Vince McMahon was then told about this situation, and called McAfee. McAfee has a picture of Lebron James wearing the same kind of outfit, which created the defense of his look being fashionably trendy. Vince claimed that he knows what is hip and allowed McAfee to wear the outfit. As a result, Cole had to apologize to him.

“Michael Cole comes back, gives me one of the realest apologies I?ve ever gotten in my entire life,” McAfee said. “He tells me, ?it?s been a long week, we?ve got a lot going on, I saw you, I thought this was gonna ruin it for you, to be honest.?”

McAfee, 31, played eight seasons in the NFL from 2009-2016. After retiring, McAfee commenced a broadcasting career, hosting The Pat McAfee Show on SiriusXM. In 2018, McAfee hosted multiple NXT TakeOver events as a pre-show panelist, including TakeOver: New Orleans during WrestleMania 34 weekend.