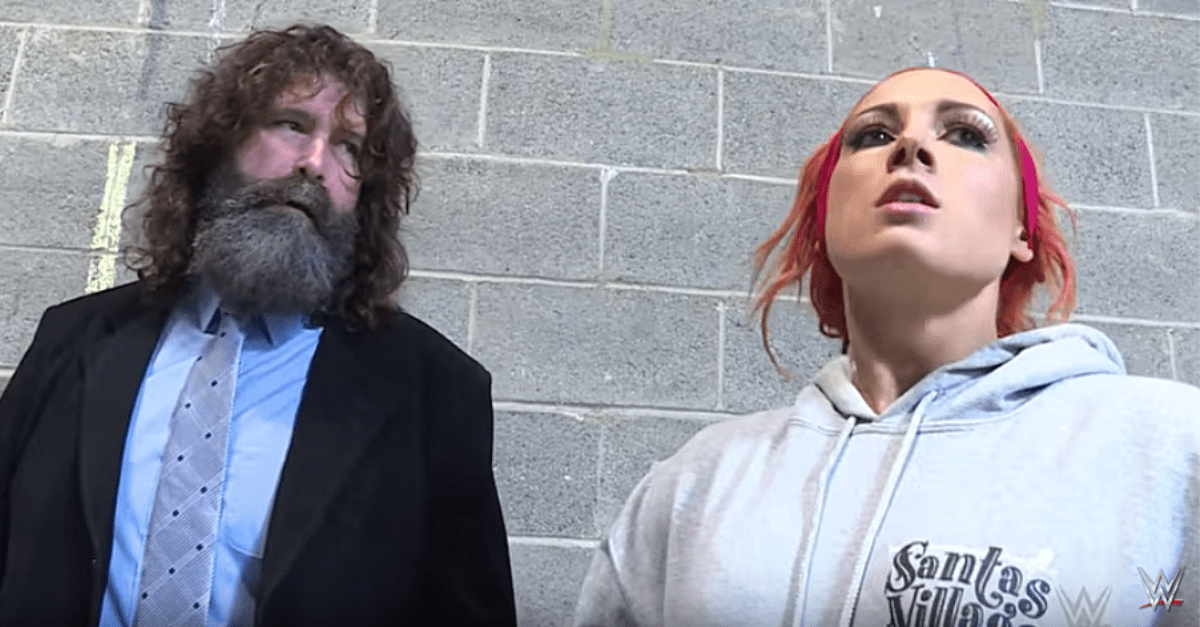 In the build up to WrestleMania 35 and the first-ever all-women’s main event to close the show, there’s been no shortage of split opinions on the rise of female wrestlers in WWE. Some fans are turning away from the company ? most of them claiming girls aren’t real athletes ? but there are a large majority who aren’t stubborn idiots and love the shift in focus to the rising women’s division.

One of those supporters is WWE Hall of Famer Mick Foley. One of the most popular wrestlers during the Attitude Era, Mankind competed in some of the most iconic matches in WWE history, including the famous Hell in a Cell match against The Undertaker at King of the Ring in 1998. If anyone knows talent, it’s the four-time world champion, and he believes WWE’s biggest star today is none other than “The Man” Becky Lynch.

In an interview with Sky Sports, the WWE legend revealed his belief that Lynch is “becoming the biggest name in our business.”

“I go back to my messages about eight or nine months ago and when she came to me for some advice I told her to be patient and to be ready,” Foley said. “Then when she got the opportunity, she ran with it like nobody I’ve ever seen, like ‘Stone Cold’ Steve Austin.”

RELATED: WWE’s Biggest Event Will Change Wrestling, All Thanks to 3 Women

Becky Lynch joined the WWE main roster in 2015, and she’s hands down been one of the company’s most popular stars in the women’s division ever since. The first-ever SmackDown Women’s Champion won the 2019 Women’s Royal Rumble, regularly saying that her rise is on her own terms, unlike her WrestleMania competitors Charlotte Flair and Ronda Rousey who were “handed everything.”

The Irish Lass Kicker is rumored to lead all WWE superstars in merchandise sales, but to say that she’s as big as star as Stone Cold Steve Austin is quite a stretch at this point in her young career.

I ran my mouth, put in the miles, took the bumps and entertained the people till they couldn’t deny me any longer. It’s an emotional day just knowing I get to smash Ronnie and Char in front of the whole world on the biggest stage possible. To the people: THANK YOU. #IAMTHEMAN pic.twitter.com/XKRhMNdz5A

Aside from original titans like Andre the Giant and Hulk Hogan, there’s arguably no wrestler more important to the company’s modern success like Stone Cold. The Texas Rattlesnake has more iconic moments than most wrestlers produce throughout their entire career, and he’s been the main-event star on multiple pay-per-views, including three WrestleManias.

Despite the positive response from WWE fans and rising success she’s had, Lynch isn’t quite on that level just yet.

However, if she were to survive the triple threat match at WrestleMania and emerge as the new Raw Women’s Champion, there’s going to be a different conversation happening if she pulls it off at professional wrestling’s Showcase of the Immortals.