Did Hulk Hogan Deserve the WWE Hall of Fame? Not Exactly. 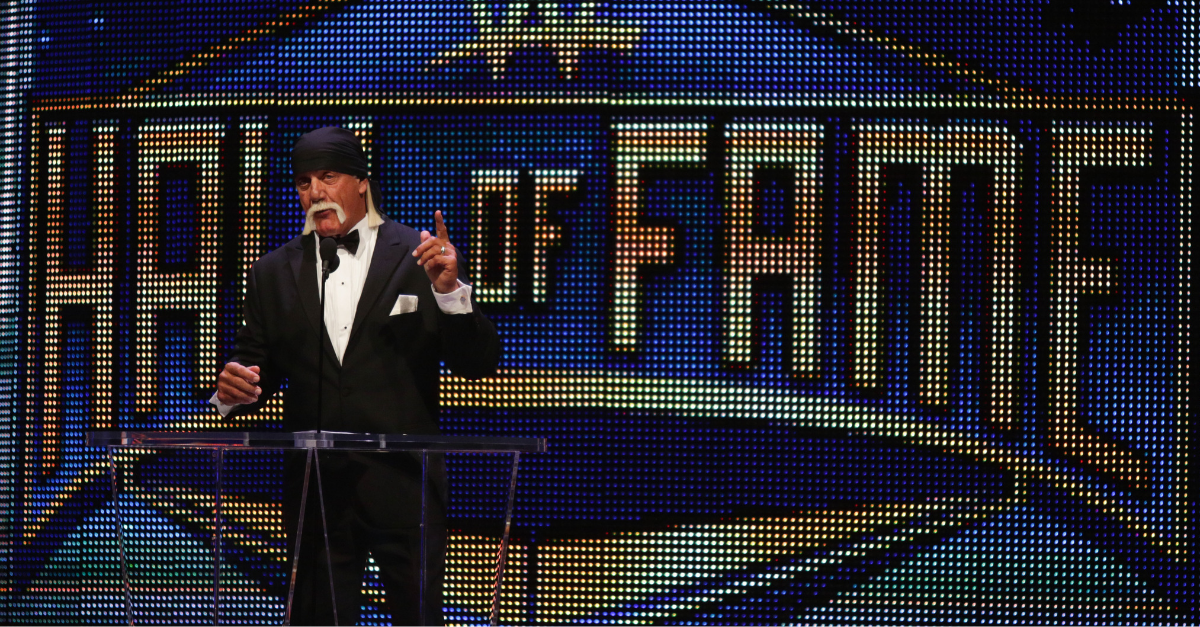 Hulk Hogan is considered the greatest, most influential professional wrestler to ever live. Hulkamania dominated the 1980s. Hogan later reset his career as the villainous “Hollywood Hogan” in World Championship Wrestling in the 1990s. From the start, the most recognized wrestler on the planet has always lived up to his billing as “The Immortal” Hulk Hogan.

Hogan’s crowning moment was his induction into the WWE Hall of Fame in 2005, and he was inducted by Sylvester Stallone.

But on July 24, 2015, WWE terminated Hogan’s contract with the company after the release of a sex tape which included Hogan being openly racist, using the N-word multiple times in a blatant, derogatory manner. Hogan was removed from all WWE media publications, including upcoming WWE video games and the organization’s Hall of Fame website.

Almost three years to the day, WWE announced prior to its pay-per-view event, WWE Extreme Rules in Pittsburgh, that the wrestling legend would be reinstated into the WWE Hall of Fame.

BREAKING: After a three-year suspension, @HulkHogan has been reinstated into the @WWE Hall of Fame. https://t.co/SxwUms9Yet

With everything that Hogan did for the organization, from his debut until today, the WWE could not allow its most prized possession, the larger-than-life personality who gave the global entity a chance to survive, to be outcasted forever. Hogan’s numerous public apologies, charity work and public appearances had given the superstar a second chance.

Did the legend Hulk Hogan, based on in-ring merit alone, deserve another chance? Why should a racist tirade behind closed door be forgiven so easily?

Terry Bollea was born in Augusta, Georgia. Starting to train for professional wrestling at 16-years-old, Bollea debuted at Championship Wrestling from Florida in 1977. Quickly, Bollea’s stature and charisma made him an easy attraction to bill, and his reputation grew rapidly, wrestling in the amateur ranks in the southeastern United States. He paired with Ed Leslie to form tag team partners Terry and Ed Boulder, “The Boulder Brothers.”

During an appearance on a local talk show in Memphis, Bollea sat beside Lou Ferrigno, who famously portrayed The Incredible Hulk on television. The show’s host commented on Bollea’s massive frame, and the fact that he actually was bigger than “The Hulk.”

This week on @JJDillonShow: JJ takes us through Hulk Hogan vs. Ric Flair in the WWF. It’s a fascinating look behind the scenes. pic.twitter.com/DHliwBLByX

On November 17, 1979, Hulk Hogan made his WWF debut. During a short initial run in the WWF, Hogan took on a villainous persona, starting a rivalry with fellow WWE Hall of Famer Andre the Giant, culminating in a WWF Heavyweight Championship match at Shea Stadium in 1980.

Following stints with New Japan Pro Wrestling and American Wrestling Association, Hogan’s star power grew even more after his appearance in Rocky III alongside Sylvester Stallone. “Thunderlips” had become an icon that could be recognized around the world.

In 1983, Vince McMahon purchased the WWF from his father and set out to make it a major entertainment franchise. His first step was to sign Terry “The Hulk” Boulder as the company’s new star attraction. McMahon decided that Bollea’s last name in the ring should be “Hogan” to appeal to its Irish fan base.

That year, “Hulk Hogan” returned to the WWF, and his run of dominance lasted for nearly a decade.

The “Hulkamaniacs” couldn’t get enough of their beloved superstar, and his billing as the organization’s biggest star went unchallenged for years.

In 1994, Hogan joined the WCW and won the WCW World Heavyweight Championship in his first match. Hogan formed the New World Order alongside fellow WWE Hall of Famers Kevin Nash and Scott Hall. Hogan traded his patented red and yellow ring attire for an all-black ensemble, and became a villain fighting under the new name, “Hollywood Hogan.”

Hollywood Hulk Hogan was a six-time WCW World Heavyweight Champion before leaving the organization in 2000.

The WCW disbanded in 2001 and was purchased by the WWF, which rebranded to become the World Wrestling Entertainment.

A Netflix documentary about the Gawker vs. Hulk Hogan trial will change how you see the case https://t.co/xqaDTwuhk8 pic.twitter.com/DlKPh7CoCJ

Video surfaced in 2015 of Hogan’s racially charged rant during a secret filming of a leaked sex tape. In the tape, Hogan used multiple racial slurs, which included criticizing his daughter, Brooke Hogan, and her decision to date a person just because he was black.

The WWE ended its affiliation with Hogan immediately.

Soon after, Hogan filed a $100 million lawsuit against Gawker, who had released the tape publicly, stating that the tape violated Hogan’s right to privacy. The woman in the video, Heather Clem, was the wife of Hogan’s friend Bubba “The Love Sponge,” a radio personality.

Bollea v. Gawker ended with the jury finding in favor of Hogan in the amount of $115 million, including $60 million for emotional distress.

Following appeals and post-trial motions, Bollea and Gawker Media settled for $31 million, and all the articles involved Bollea were removed from Gawker’s website.

Hogan blamed his use of the word on his upbringing, and he has publicly apologized numerous times for the incident.

Just met with the @WWE Superstars and on all levels the volume of love and support was overwhelming. I’ve been praying for this day and I finally feel like I made it back home. Only Love 4 the #WWEUNIVERSE brother HH

Since Hogan’s settlement in the case, he has focused his time and energy on repairing his image away from a wrestling ring.

On May 3, 2018, Hogan was inducted into the Boys & Girls Clubs of America Alumni Hall of Fame. He credits being involved at the Inner Bay Boys Club in Tampa, Florida growing up with how he became the person he is today.

At his induction speech, Hogan said:

But did the work that Hogan put in over that three-year suspension to repair his image warrant a grand return? Is there any reason why Hulkamania deserved a massive welcome back from the WWE?

In this writer’s opinion: Not really.

When you’ve crossed a line like that, no amount of apologies, public or private, erases that moment in time where your true character was revealed.

Should merit alone keep Hogan in the Hall of Fame? Duh. He practically built the brand himself.

Still, WWE is working to break barriers. They’ve built a massive women’s division. They embrace cultures and audiences all over the globe with events like Crown Jewel in Saudi Arabia. Why bring a stained icon like Hogan back into the fold when the brand was stronger than ever?

All you need to know about how some wrestlers felt following Hogan’s reinstatement came in a perfectly crafted response from former WWE Champion Kofi Kingston. You can read the entire thing here, but one paragraph speaks volumes:

“On a personal level, when someone makes racist and hateful comments about any race or group of people, especially to the degree that Hogan made about our people, we find it difficult to simply forget, regardless of how long ago it was, or the situation in which those comments were made. But we also do not respond with more feelings of hate. Instead, we just do not associate with the people who convey or have conveyed this negative and hurtful mindset. This instance will be no different. Perhaps if we see him make a genuine effort to change, then maybe our opinion will change with him. Time will tell.”

Whether it was an “invasion of privacy” or not, the world saw Terry Gene Bollea behind closed doors. That doesn’t change whether you apologize, volunteer, or pledge yourself a changed man in a public forum. If the WWE stood by its original statement of being “committed to embracing and celebrating individuals from all backgrounds as demonstrated by the diversity of our employees, performers and fans worldwide,” then don’t let a someone like this continue to make your organization money.

Hogan is in the Hall of Fame forever, but put an asterisk next to his name.

This article was originally published on July 16, 2018