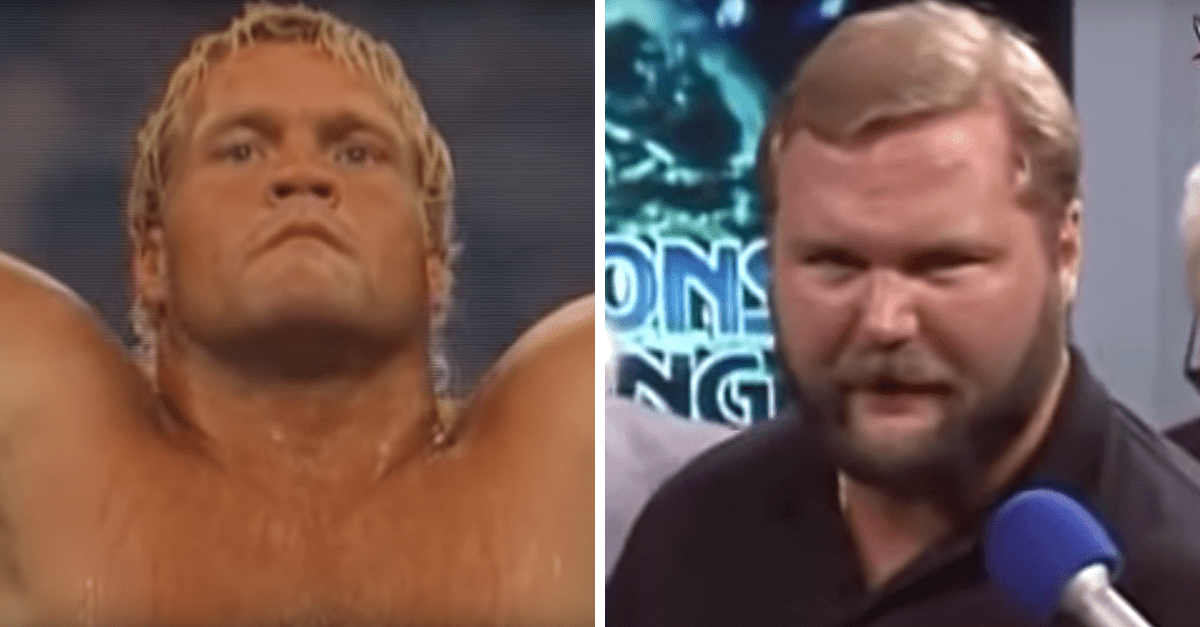 There have been a lot of wacky stories in the professional wrestling business. While there is a sense of family in the locker room with the male and female wrestlers, tension does rise and cause some fights to occur. One of the most famous stories was back in 1993 in Blackburn, United Kingdom, when an altercation happened between Sid Vicious and Arn Anderson.

According to the account of Col. Robert Parker, who used to manage Sid, he was heading to the WCW show in England overseas “without his steroids” and knew that he was not able to take them. Since he took “an awful lot of stuff,” Sid was “ready to explode.” Sid insulted Arn while they were at a bar along with Steve Austin. They tried to laugh it off, but it kept going on. Arn then threw a drink at him, which caused the altercation to intensify. This caused a number of agents to stop the scuffle, forcing the bar to close and the wrestlers to go back to the hotel room.

As the superstars went back to their room, Arn began trimming up his beard. However, Sid was not done yet, as he tore up a chair, grabbed a leg off of it, and proceeds to Arn’s room. Sid knocks on the door, Arn answers, and Sid offers to “go to bed on better terms” by shaking hands. Arn agrees and opens the door, but Sid hits him with the chair leg. A brawl ensued outside the room, where Sid had the chair leg in preparation to continue to beat Arn with it. Instead, Arn used a pair of scissors to stab him with.

The two fight over the scissors until Sid gets them, while Arn runs to the elevator. The elevator did not come fast enough, and Sid caught up to Arn and stabbed him “28, 30 times, with meaning, I think, to kill him.”

Parker stated that this incident was certainly induced by the effect of steroids, and that Sid most likely regrets that ever happened. Parker stated that he talked to Eric Bischoff, and he kept him with the company because he was “on a roll.” However, Sid was let go from WCW as a result of the incident and inflicting so many stab wounds in Arn.

Sid Shares His Sid of the Story

Sid stated in an interview that he was they were waiting for food, and he brought up that Ric Flair needed to “not worry about his job” because they all had guaranteed money. He added regarding what he said about Flair, “just step back and let someone else go forward. You’re not getting a pay cut.” This led Arn to hit him over the head with a beer bottle. When the WCW head of security Doug Dillinger came to break the altercation, Arn tried to stab him with the beer bottle. He rips off a chair arm to get to Arn and knocks on his hotel room door. He believed that Arn is stumbling to the door, because he is drunk, so he throws the arm down the hall.

As soon as he turns around after hearing the door open, Arn starts “going after him.” Arn stabs him in the stomach, and Sid knocks him down with a punch. Sid gets the scissors first when they fell, and he starts stabbing him because he felt that it was a “life or death.” 2 Cold Scorpio told Sid, “hey man, you’re killing dude.” Sid throws the scissors, grabs Arn, and then realized that he was stabbed as well. He then proceeds to the lobby.

Sid stated that he was asked whether he wanted to press charges, and he rejected. He was asked again, and told by the cops that Arn “did not have a scratch on him,” which prompted him to then press charges. However, he was told by someone else that Arn was in very bad shape, and he rescinded from pressing charges. Sid stated in a follow-up interview that he apologized to Arn upon returning to WCW.

During my recent interview with Sid, he stated that WWE pulled a rib on him by calling him “Sycho Sid” because of the incident.

“You know why they named me Sycho Sid… because of that incident with Arn Anderson. So, that whole deal was a rib to me. Where did I take that? [To the] WWE Championship. And how did I get that championship? It’s because I worked so hard, Chris, and this is not kidding. I forced them to do that.”

“Superstar” Bill Dundee was the agent who was supposed to be in charge for that evening, and I called him to talk about what he remembers from the incident.

“By the time I got there, everybody got there, it was over,” said Dundee. “I don’t even know what happened.” He added, “they came to arrest Sid, then they didn’t do it, so I have no idea what happened.” He stated that nobody testified to the cops to what really happened between the two. Dundee stated that he was at the hotel bar drinking, where Sid and Arn got into a fight. He also stated, “I know that cops talked to everybody, but they never really stayed long.” Dundee added, “I was supposed to be the agent and take everybody’s story, but I never did that either. I was supposed to be in charge… they got into a fight, that’s their problem.”

Sid Cements Himself as a Main Event Star

Sid ended his previous WCW tenure in May of 1991, before leaving for WWF and debuting in July of 1991. At WrestleMania 8, he competed against Hulk Hogan and lost by disqualification. He returned to WCW in May of 1993, but he was let go just five months later after the incident. He competed in USWA for most of 1994 before returning to WWE in 1995. He competed in several dark matches and live events before squashing Mike Khoury on the May 15, 1995 episode of Monday Night Raw. Upon this return, he became a member of Ted DiBiase’s Million Dollar Corporation, before adopting the gimmick of Sycho Sid. (He was Sid Justice in his previous WWE run.)

Sycho Sid feuded against names such as Vader and Goldust before defeating Shawn Michaels at Survivor Series 1996 to become WWE Champion. He retained the title until Royal Rumble 1997, before losing it back to Michaels. He made a WCW return in 1999, and became WCW World Heavyweight Champion after defeating Kevin Nash for the vacant title in 2000.