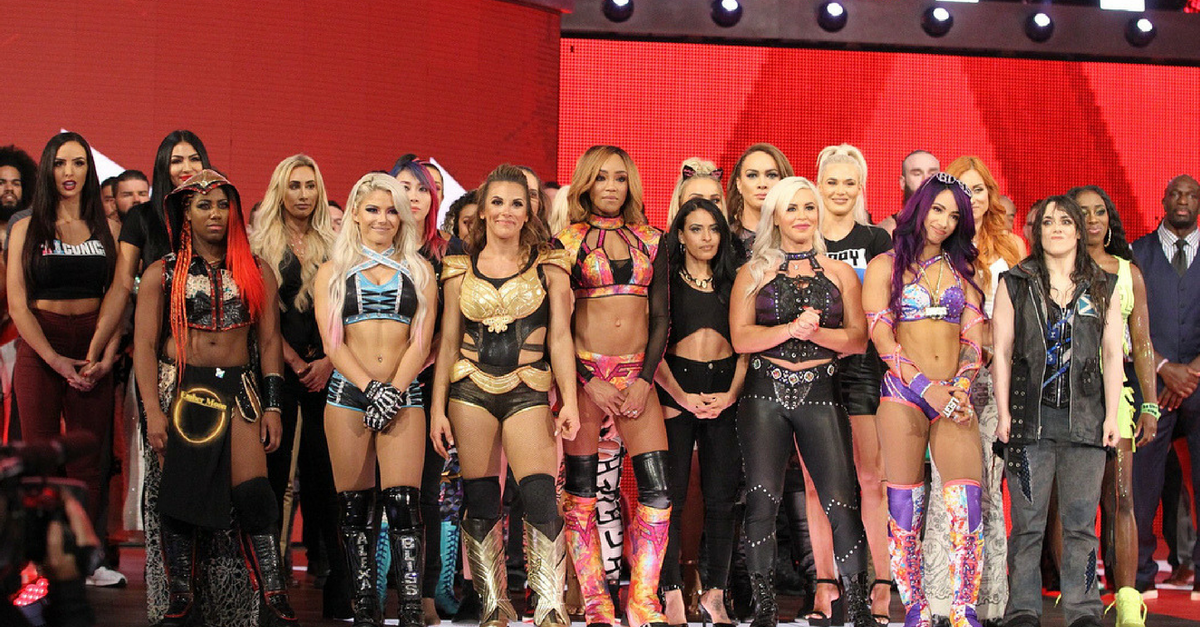 Mary “The Fabulous Moolah” Ellison held the WWE Women’s Championship on and off for almost 27 years. In 1999, she became the oldest champion in the history of professional wrestling when she re-captured the Women’s Championship at 76 years old. She has been criticized for exploiting women who trained under her for years; they were secondary attractions to the men of the sport, and Ellison took advantage of women’s striving to become legitimate superstars.

For the women of the WWE, getting limelight recognition as entertainers and athletes came following in the men’s footsteps. As of October 2018, the company will change the wrestling world, when the WWE hosts the first-ever all-women’s Pay-Per-View event.

WWE Evolution was announced on Monday Night Raw by Chief Brand Officer Stephanie McMahon. The event is set to take place on October 28, 2018 at Nassau Coliseum in New York.

History is made! @StephMcMahon has announced on #RAW that the first-ever ALL WOMEN'S Pay-Per-View will take place on October 28th! #WWEEvolution pic.twitter.com/5tNOziwYkR

As part of the historic announcement, Evolution will include all of the WWE’s women’s championships being defended, as well as the finals of the 2018 Mae Young Classic, a WWE-owned women’s wrestling tournament.

Already announced as one of the headline matches will be Ronda Rousey getting her first shot at a WWE women’s title, when she challenges Alexa Bliss for the WWE Raw Women’s Championship.

Roman Reigns beat Bobby Lashley in a thriller and will face Brock Lesnar at SummerSlam for the WWE Universal Championship, but it played second fiddle to the news of Evolution on Monday Night Raw.

The WWE Universe erupted when the announcement came down, as the event is long overdue for the women who have earned their right to become face’s of the international entertainment company.

It has been such an honor to be a part of this women’s division for the last few months. These women have all taught me so much and I couldn’t be prouder to call myself a @WWE Superstar. I’m ready for #Evolution.

So incredibly proud to be apart of @wwe women’s division as we are continuing to make history every day! Wish I was there tonight but we can’t control the weather! 🤷‍♀️ Just landed and saw the incredible news as the first-ever ALL-WOMEN’s pay-per-view event! #WWEEvolution

How MONUMENTAL is this!! So excited👏🏽👏🏽👏🏽 What an epic time to be a part of WWE!! Thank you!!! #SeeYouSoon #Raw #WWEEvolution https://t.co/aoMbCiM1Rp

This is certainly a #Ravishing #LanaDay ! Every little girl should know that they can do ANYTHING they want. This is our #WWEEvolution. We do this for all of you @WWE Universe !

My brothers can tell ya…anything yall boys can do we can do better!! #Evolution #WWE #WWEEvolution #Raw #RiottSquad

Paul Levesque, better known as Triple H, the WWE executive vice president of Talent, Live Events & Creative told ESPN.com, “Three years ago, our fans demanded a change with #GiveDivasAChance. Everything that’s happened since then has come from that demand — their insistence on seeing that change. Once given the [chance], they have taken every opportunity and not only knocked it out of the park, but hit a grand slam.”

WWE Evolution sets the table for the women’s division to climb into the spotlight, competing for main event nods at major WWE pay-per-view events like SummerSlam and Wrestlemania.

The female superstars of the WWE sacrifice just as much as the men in their sport, and finally have their own all-women’s PPV to showcase that talent.

READ MORE: WWE Women’s Champion Alexa Bliss Freaks Everyone Out During a Match