They say that records are meant to be broken, but that's not necessarily the case in NASCAR. This is mostly due to the evolution of the sport. A sport that has transitioned from the days of stock-car-racing past, where speed was prioritized over safety, to the modern era, where we've seen an increase in competitive racing due to the modifications of the race cars and NASCAR tracks.

As a result of these necessary changes, NASCAR drivers have had to come to terms with the fact that there are a number of records that will simply never be broken. One of these records is the fastest NASCAR speed of all time, which was recorded by Bill Elliott at Talladega Superspeedway back in 1987. 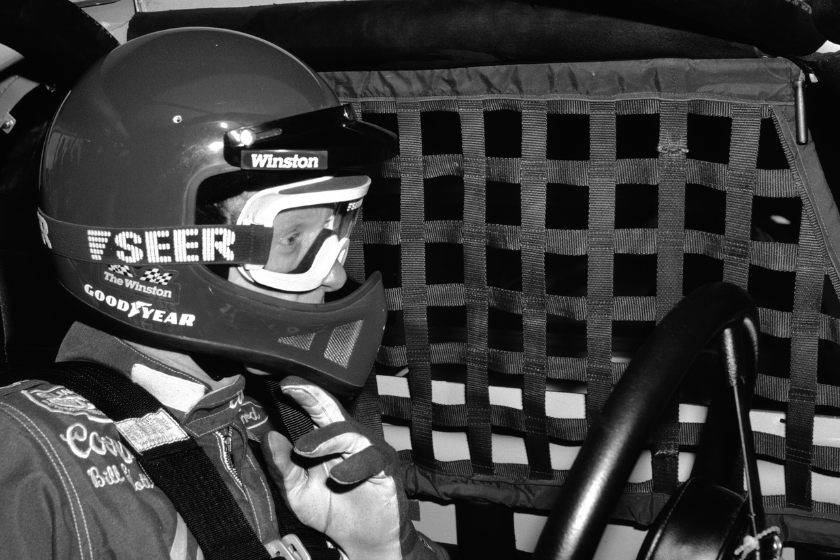 Bill Elliott's No. 9 Ford Thunderbird was made to break records. Built for the 1987 season, the tube-frame car weighed 3,700 pounds and boasted a 351 cubic-inch Ford V8 engine that made 625 horsepower. Needless to say, by the 1980s, these racing machines were "stock cars" in name only.

The car really showed what it could do at the Daytona 500, because on his way to a dominating victory at Daytona International Speedway (he led for over half the race), Elliott put up a top speed of 210.364 MPH. Elliott set one record that day, and he came close to a second, as his average speed during the Cup Series race was 176.263 MPH.

It didn't take long before Elliott would break his own record. Three months later at Talladega during qualifying for the 1987 Winston 500, Elliott put up a top speed of 212.808 MPH and a lap time of 44.998 seconds. Obviously, this was a major day in the motorsports world, and Elliott really soaked in the moment, posing in front of the No. 9 Ford with the sign "World's Fastest Race Car." For some perspective on how big a deal Elliott's record was, it even put the IndyCar world on notice, and those cars were built to put up much higher numbers.

For the 30th-year anniversary of Elliott's record-setting lap in 2017, the 1988 NASCAR Cup Series champ recalled his history-making moment at Talladega while comparing it to his big race at Daytona.

Elliott also admitted that his feat didn't come without enormous risk. But, hey, they call him Wild Bill for a reason.

"You still had to do everything you could to make the car really uncomfortable to run fast," Elliott said. "There were guys over there before qualifying taking the rear spoilers off, but you couldn't drive them. You had to have a little bit of downforce or you couldn't drive them, so you just had to get to that point where you took as much off as you could and still be able to make it around the racetrack."

While many were impressed by Elliott's fast day at Dega, others were concerned by how fast the cars were capable of going, as it raised serious safety issues. These concerns would come to a head just a couple days later.

Why Bill Elliott's Record Will Never Be Broken

Now, you might be asking yourself, "Why will Bill Elliott's NASCAR speed record never be broken?" For that answer, we head to lap 22 of the 1987 Winston 500.

Cruising at a speed of around 210 MPH, NASCAR Hall of Famer Bobby Allison found himself in serious trouble after his engine blew out. Debris shot out everywhere, with some of it cutting his tire. This sent Allison airborne, causing his No. 22 Buick to destroy an almost 100-foot section of the catchfence. Thankfully, he avoided going into the grandstands (as that would have resulted in much more serious casualties), but in the end five people were injured. One of those injured even lost an eye in the process.

As a result of Bobby Allison's wreck at Talladega, NASCAR implemented restrictor plates, which reduced the power and speed of the cars. Now, this unintentionally created large packs of cars during NASCAR races, leading to the creation of the terrifying phenomenon known as "The Big One." But, that's a story for another time.

In any case, Bill Elliott will forever be known as the man with the fastest speed in NASCAR history. Technically. In 2004, Rusty Wallace took off his restrictor plate during practice laps ahead of the Cup race at Talladega and ended up hitting a top speed of 228 MPH. But that didn't qualifying as an official speed record. Can you imagine racers going that fast nowadays during an actual race? It'd be insanely dangerous, but viewership would be through the roof.

MORE: Bill Elliott's Victory at the 1985 Daytona 500 Is a Classic NASCAR Moment