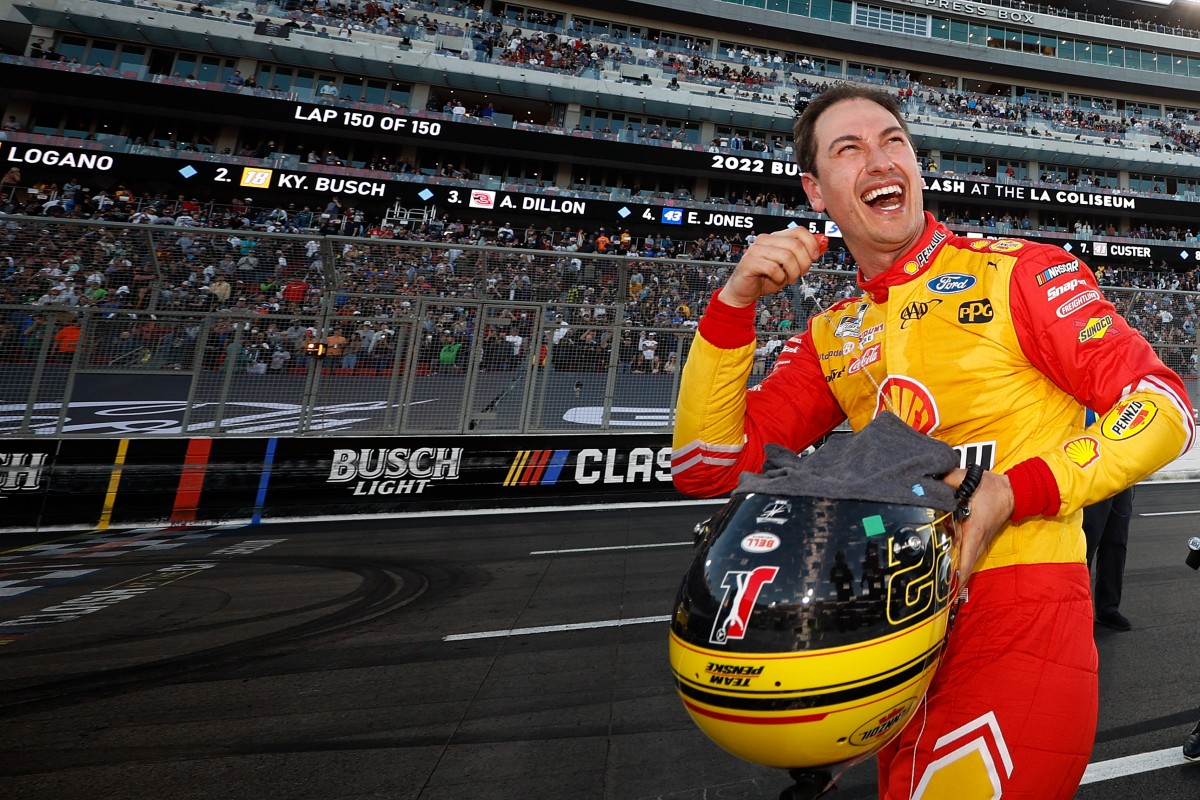 The most glaring oddity, obviously, being the fact that it was held in a football stadium and not at an actual race track. On top of that, Jeff Gordon lit the cauldron built for the 1932 Summer Olympics. Ice Cube performed a six-minute halftime show. The crowd booed Kyle Busch during driver introductions — alright, so that last one is actually pretty typical.

But, aside from all the spectacle and hype surrounding the exhibition race, it still was just that: a race. There were several hours of intense competition, and at the end of that, the checkered flag was waved and a winner crossed the finish line.

Joey Logano was ultimately able to out-race Busch for the win, and while his celebration in Victory Lane wasn’t anything out of the ordinary, the Team Penske driver appreciated the fact that this Clash win was significantly more meaningful than his win back in 2017.

“Of all the Clashes, this is probably the biggest Clash win you can imagine,” Logano said in a post-race interview.

“First time coming to this historic venue, like I said, being able to do that together as a team. Also some of the adversity we fought through, what (Logano’s crew chief Paul Wolfe) was saying earlier. We were 26th on the board. That was me trying really hard to go as fast as I could go.”

Logano continued, “To see everybody come together, not just the 22 team, but Team Penske in general, to be able to all lean on each other, what we learned in practice, ultimately put together a really good package to where it qualified well, we were able to win our heat race, keep track position, be good on the long run, which was a bit surprising to me. I don’t know about you, Paul. For me I thought it would be better on the short haul. Find our strengths, be able to play to them, win it.”

“Really cool. Last couple wins have been on some weird race tracks, so I don’t know. Bring ’em on. Bring on the more weird stuff.”

“It was an awesome experience all around,” Larson said.

“First race with the new car. This event was really neat. It seemed like a great atmosphere. I’m not able to ever sit in the stands and watch other races. I got to watch a Heat Race and the Last Chance Qualifiers. It seemed like a blast and I hope we can do more of this.”

Allmendinger added, “Definitely happy to make the main. It was cool to be in the L.A. Memorial Coliseum, be a part of this event and have both Kaulig Racing cars make the main. I’m fairly happy with how the race went.”

“To start at the back like that and kind of drive our way to the edge of the top-10, inside the top-10 and finish ninth. I would have liked to have gotten a little bit better. But overall for the weekend, it’s something to build on. Just a great event to be a part of.”

Tyler Reddick didn’t certainly didn’t have the race he was hoping for: a broke transaxle effectively ended his day in LA. But, despite his disappointing 21st-place finish, Reddick was still able to look on the bright side.

“Certainly, the obvious big bummer is breaking our transaxle doing something I probably didn’t even need to do. I had done a good job putting heat in the tires all weekend, but maybe I got too aggressive with it. I don’t know for sure. We’ll have to go back and look at it in the shop this week. We had one of the fastest cars on the race track. We were just riding and managing the gap back to Kyle Busch and trying to lap as many cars as we could so we wouldn’t have to worry about them later. But we never made it that far. It’s a tough lesson, but it’s a lesson we can learn from.”

MORE: Here’s a Look at Every NASCAR Cup Series Driver and Team Competing in the 2022 Season