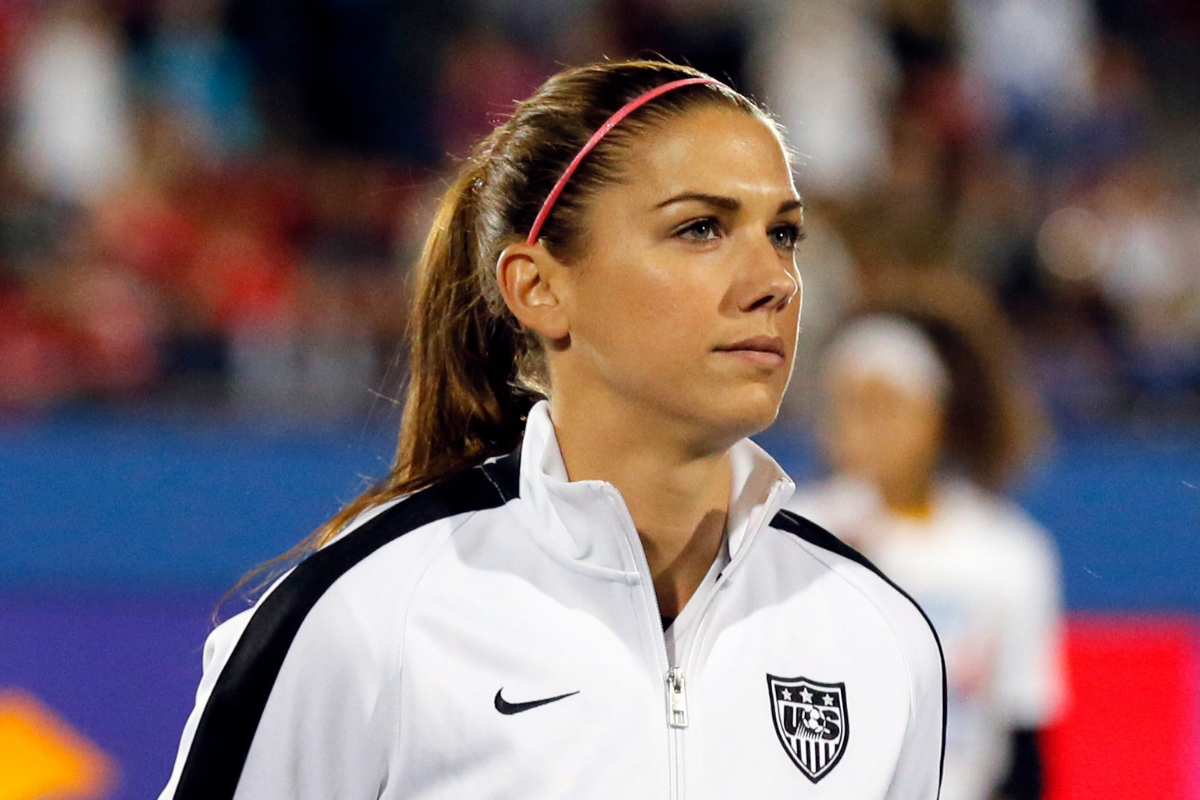 The Footballer Fatale has amassed quite a following since bursting onto the American soccer scene in the 2011 Women’s World Cup. Since then, Morgan has won Olympic Gold Medals, two Women’s World Cups and the hearts of US soccer fans from sea to shining sea.

Alex Morgan is Messi famous, but she isn’t paid anywhere close to the level her status deserves.

Happy Birthday @alexmorgan13! 🎉 Here's to a big month of ⚽️ and celebrations! 🙌 pic.twitter.com/pJuMMP3RiI

Alexandra Patricia Morgan Carrasco is a Team USA legend, a mother and a wife. The striker married professional soccer player Servando Carrasco, formerly of the Los Angeles Galaxy, in 2014.

Morgan is from Los Angeles, specifically from the Diamond Bar suburb of San Dimas, California. Morgan’s parents are Pamela and Michael T. Morgan. She has two siblings, Jeni and Jeri.

While rising through the ranks of her local American Youth Soccer Organization (AYSO) circuit with Cypress Elite, Alex Morgan was dubbed “Baby Horse” due to her equestrian-like gait. By the time she was a University of California Golden Bear, Baby Horse was a full-blown mustang.

She graduated from Diamond Bar High School as an All-American. She played with the Olympic Development Program, and anyone who played youth soccer knows the ODP kids are good. The US Women’s Under-20 squad called her up when she was 17. Unfortunately for Morgan, a torn ACL stalled her USWNT U-20 career.

Morgan played college soccer at UC Berkeley, where she met her future husband, Servando. She graduated early from the University of California, Berkeley in 2010 with a Honda Sports Award, four NCAA tournament appearances and a political economy degree.

Morgan briefly played for the USL W-League, another amateur division, with the Pali Blues before being drafted in the 2011 Women’s Professional Soccer draft.

The Western New York Flash took Morgan at No.1 in the 2011 WPS draft, winning the first and only WPS title the same season. When the league fell apart, Morgan re-entered the USL W-League with the Seattle Sounders Women. The year was 2012, the same year Morgan became a USWNT superstar.

After a tough loss to Japan in the 2011 FIFA Women’s World Cup, Morgan?then the youngest player on the national team?wanted revenge during the 2012 London Olympics. She helped lead Hope Solo, Sydney LeRoux, Abby Wambach, Megan Rapinoe and Carli Lloyd to an Olympic gold medal. Morgan’s late goal heroics (heroinism?) against Canada in the semi-final allowed Team USA to face off against Japan again in the final.

This time, the Stars and Stripes won. Morgan won US Soccer Female Athlete of the Year and was a FIFA World Player of the Year finalist for scoring several hat tricks and even more assists.

Snap back to the United States in 2012. Despite the women’s national soccer team’s unprecedented success and popularity, there was still no professional women’s soccer league in the States. That all changed in 2013, thanks in part to Morgan’s heroics.

The National Women’s Soccer League (NWSL) was formed in 2013 and is the most successful professional women’s soccer league in the United States to date. It’s still running today.

Morgan began her NWSL career with the Portland Thorns FC. They won the inaugural NWSL championship, defeating her old WPS club, the WNY Flash. In 2016, Portland traded Morgan to the Orlando Pride expansion team, located in the same city as her husband, Servando.

The trade came after Morgan helped the USWNT win their third FIFA Women’s World Cup in 2015. Morgan proved crucial in her seven matches, earning penalties and scoring goals along the way. After defeating Japan (again), Team USA wanted to repeat at the 2016 Rio Olympics.

Morgan scored a hat trick against Trinidad and Tobago, and the USWNT defeated Canada for yet another Olympic Gold Medal. Morgan’s stellar international play resulted in a move to Europe.

Morgan joined Lyon in France for over $30,000 a month in 2017. She helped Lyon win the French domestic league and the famed UEFA Champions League, despite nagging hamstring injuries.

Morgan briefly returned to Orlando before joining Tottenham Hotspur in the FA Women’s Super League. Again plagued by injury, Morgan returned to Orlando after one season. She scores proud goals for the Pride today and earned NWSL Player of the Month in May 2021.

Despite professional injuries, Morgan continued to shine at the international level. She tied Michelle Akers’ Women’s World Cup single-game record by scoring five goals in a 13-0 thumping of Thailand in the 2019 FIFA Women’s World Cup.

Morgan scored a goal in the semi over England and earned a penalty in the final over the Netherlands. The USWNT claimed their fourth World Cup trophy and Morgan the Silver Boot. Add that to a trophy case overflowing with gold medals, golden balls, international trophies and lucrative sponsorships.

Olympic gold medalist Alex Morgan is one of the most marketable female athletes since Mia Hamm. Mia Hamm had her own video game, but Morgan has her movie, “Alex & Me.” She also has a book series for young women titled “The Kicks,” recently adapted to television for an upcoming Amazon Prime series.

Less kid-friendly, Morgan has appeared in the Sports Illustrated Swimsuit Edition, “The Simpsons” and multiple music videos. She appeared, alongside Lionel Messi, on the cover of the popular FIFA video game and was named one of Time Magazine’s Most Influential People of 2019.

Morgan has worked with companies like Nike, Panasonic, AT&T, Chapstick, McDonald’s, Bank of America, Bridgestone and Coca-Cola. With big names like that, Morgan must be worth a pretty penny.

Alex Morgan’s net worth is estimated at $3 million, according to Celebrity Net Worth. Forbes ranks her as one of the highest-paid female soccer stars, but you’d expect a living legend to make more.

For instance: take Christian Pulisic. He’s a phenom for the men’s team. Like Morgan, he’s played in Europe and won a Champion’s League. Unlike Morgan, he has no gold medals or even a single World Cup appearance. Morgan’s been at it for a decade, but Pulisic went pro in 2015. Alex Morgan is worth $3 million. Christian Pulisic has an estimated net worth of $10 million.

I’m not saying Pulisic isn’t worth it (he probably is). But what I’m saying is that Morgan should be worth more. And I’m not the only one who says so.

Morgan has been on the frontlines, along with her USWNT teammates, of the fight for women’s equal pay.

The USWNT is far more successful than its male counterparts. Despite victory bonuses and victory tours, US Women earn significantly less than men while winning substantially more.

Alex Morgan is a lot of things to a lot of people. She’s one of the most underpaid soccer stars in the beautiful game’s long history, and that needs to change.

MORE: Mia Hamm is a Soccer Legend, But Where is She Now?